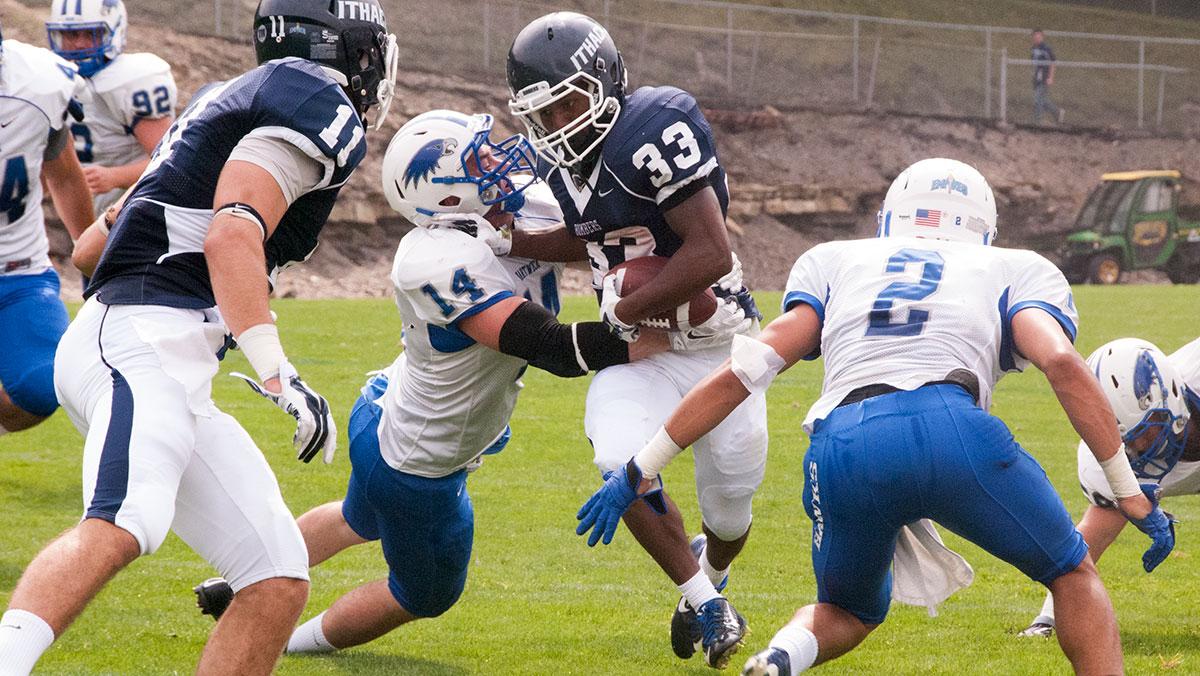 Not only is that a good song by A Tribe Called Quest, it is a good message for the Bombers who are about to enter a very winnable stretch of games. The Blue and Gold host the Pioneers and the Buffalo State Bengals in consecutive weeks before traveling to Frostburg State University. While the Bengals have given the South Hill squad fits, beating them in 2012 and nearly again in 2013, the Bombers need to use their next three games to assert themselves as playoff contenders.

If the Bombers slip up and loseany of these games, they are going to have to run the table in a situation exactly like last year. With road games against SUNY Brockport and St. John Fisher College to finish the conference regular season, the Bombers would be facing much more difficult circumstances to make a late season push this year than they faced last year.

The Pioneers’ primary offensive weapon is senior wide receiver Anthony Acevedo. Acevedo was the Empire 8 co-offensive Player of the Year last season after recording 955 receiving yards and six touchdowns in nine games. After a slow beginning to the season, he came into form last week with a 12-reception, 199-yard performance against Brockport. Acevedo is 6 feet 2 inches tall and is outstandingly strong, which makes him a reliable target anywhere on the field and gives defenses matchup nightmares. Additionally, his run-blocking ability allows for the Pioneers to use him as an edge blocker.

The Bombers struggled against tall receivers all season last year because of their inability to match their strength, with Acevedo recording 10 receptions for 137 yards in last season’s game. Bombers defensive coordinator Mark McDonough said Acevedo’s skillset makes him almost impossible to shut down.

“It’s a challenge because he’s so talented, he’s such a good player,” McDonough said. “We want to give him a couple of different looks for him and try different ways of defending him. You’re not going to stop him, you want to slow him down.”

The Bomber cornerbacks will have to physically engage Acevedo on almost every play, as Acevedo will either be blocking for runs or screens that come to his side with him as a blocker. Additionally, he will be the first receiver either Pioneers quarterback looks to throw the ball to.

Pioneers senior quarterback Conor Butkiewicz has regained his starting job — kind of. Butkiewicz and sophomore-transfer Will Kassar have been competing for playing time throughout the season. Kassar started the first three games this season but was replaced by Butkiewicz for last week’s game for undisclosed reasons. The one certainty about the Pioneers’ quarterback situation is that Butkiewicz is the better passer with a completion percentage just below 55 percent compared to Kassar’s 51 percent. For comparison’s sake, Bombers senior quarterback Tom Dempsey has the fifth-best completion percentage in Division III at almost 75 percent.

It will not be a surprise if Pioneers head coach Blaise Faggiano starts Butkiewicz against the Bombers, but Kassar will play because of his ability to run. Butkiewicz threw four interceptions in last year’s meeting between the two teams, so if he struggles against the Bombers again, Kassar will enter the game. Though Kassar played in the Division I Football Championship Subdivision, he has struggled against average Division III opponents, so as the old cliche goes: The Pioneers have two quarterbacks, which means they have no quarterback.

The Road is Being Paved

With the Bombers and Pioneers set to face each other, the number of undefeated teams left in the Empire 8 will drop to, at most, two. Fisher, the other undefeated team, hosts the Salisbury University Sea Gulls. The Sea Gulls have struggled this season and are ripe for the picking for the No. 7–ranked Cardinals, who can finally record their first conference win against the Sea Gulls.

If the Cardinals take care of the Sea Gulls and the Bombers take care of the Pioneers, as both teams are expected to do, the two teams will be on a collision course for a Nov. 8 meeting of unbeaten teams with the Empire 8 title at stake. Other Empire 8 games this Saturday include Alfred University traveling to Hartwick College to take on the Hawks and the Bengals traveling to Maryland to take on the Frostburg State Bobcats.