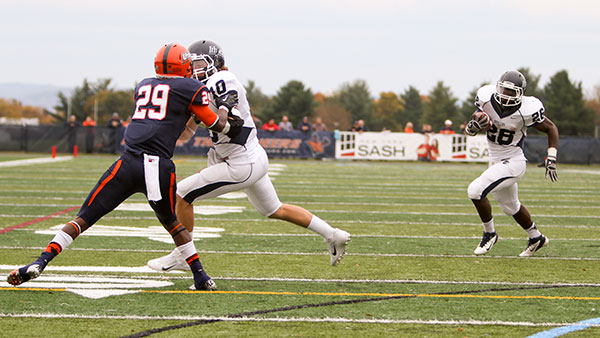 Be On the Mark

With the Empire 8 adding SUNY Brockport for this season, the Bombers will only play one non-conference game before they begin their slate of conference games. Even though the Blue and Gold have a bye week next week, the lack of playing time leading into conference play could be a concern if the Bombers do not execute well. Two basic indicators of a team’s sloppiness, especially in its first game, are penalties and turnovers. In the last season opening win against Moravian College, the Bombers committed 10 penalties and four turnovers. For the season, the South Hill squad averaged about four penalties a game and just more than two turnovers a game.

These figures explain why some sloppy play is understandable for the first game in the season. If the Bombers cross that threshold against the Dutchmen, a team they have never lost to at Butterfield Stadium, then this season could prove to be difficult.

In what is becoming a tradition, the Blue and Gold’s main offensive question mark is the running back. Regardless of whether senior Tommie Padula recovers in time from an injury picked up during the preseason to play on Saturday, the Bombers will enter the season with a new starting running back for the fourth consecutive season. If Padula does not recover, sophomore Shawal Abdur-Rahman will start for the first time in his career. Abdur-Rahman only played in one game last season. His listed backups are freshman Tristan Brown and junior John Iannone, who has never played at the varsity level. Additionally, all three running backs are below 6 feet tall.

The running backs’ inexperience would not be as big of a deal if Padula had not had issues staying healthy. Last season, he missed four games due to a concussion. In that time, then-freshman Evan Skea emerged to be the Blue and Gold’s leading running back. With Skea no longer with the team, the responsibility to improve the Bombers’ 2.4 yards per rush average from last season would fall on Padula. However, if injuries continue to bother him, the task would fall on an inexperienced and undersized trio.

Final Piece of the Puzzle

The Bombers return four of their five starters on the offensive line, but replacing offensive tackle Pat Stephenson ’14 has been a little more complicated than it initially appeared to be. Senior Dylan Rampa will move from left guard to left tackle, and senior Zak Mysza will slot into left guard. Mysza enters the season as the starting guard after beating out junior Owen Watrous and seniors Phil Merenda and Gideon Inkeles. Offensive Coordinator Ryan Heasley said Mysza’s consistent performance in training camp was what gave him the job. Heasley added that Mysza’s intelligence fits well into his offensive schemes.

“He’s more of an analytical type of guy,” Heasley said of Mysza. “He’s a very good business student. As far as scheme-wise, he’s always doing the right things. We’re able to work a chemistry between that left side, which is what I think he brings to the table. He can do all things we ask of him as far as our zone blocking, our double teams. He can do everything.”

The Bomber offensive line did not have a good training camp and had notable issues pass blocking and run blocking last season. If Mysza struggles and the left side of the offensive line — senior quarterback Tom Dempsey’s blind side — becomes disjointed, Dempsey will be under far too much pressure to establish a rhythm in the passing game.

In what is a very convenient narrative arc, this year’s regular season will begin and end with non-conference matchups that will be in-conference matchups next season. This week, Salisbury University will travel to Christopher Newport University in a relatively local matchup between teams that will leave the Empire 8 and USA South Athletic Conference and join the New Jersey Athletic Conference after this season. The other end of that arc comes at the end of the regular season with SUNY Cortland, who will leave the NJAC and join the Empire 8, thereby making this year’s Cortaca Jug the last non-league Cortaca Jug game.