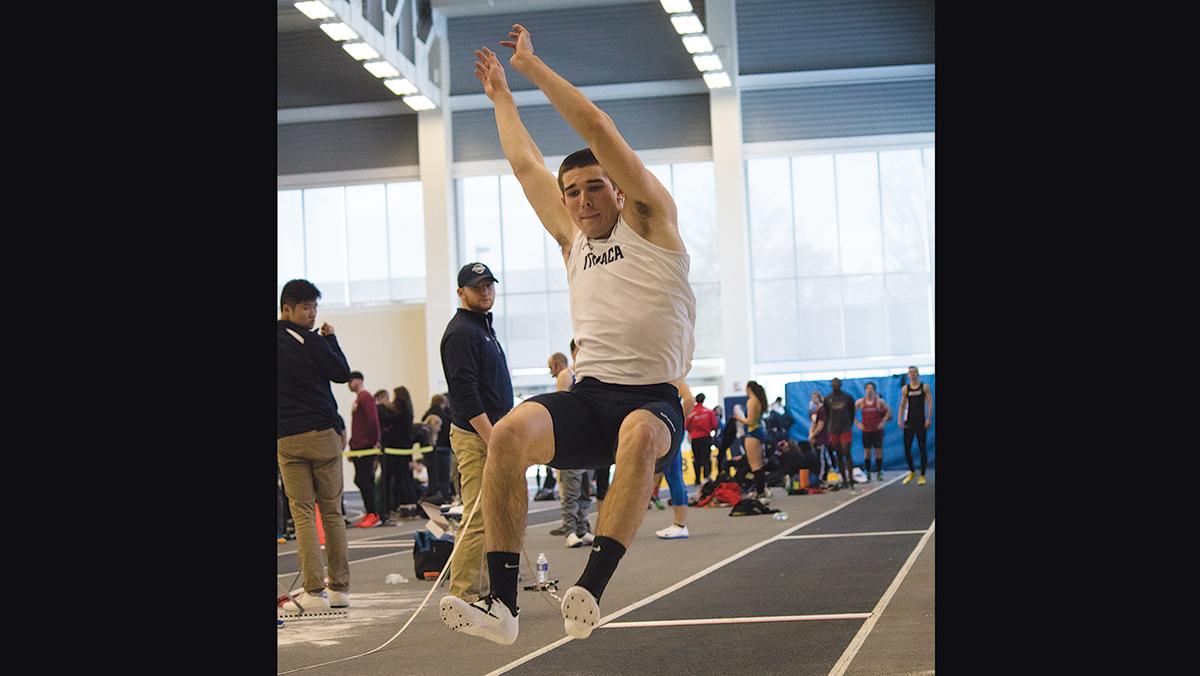 The football is hiked, and Greenwald hits the gas. He sprints down the field, slams on the breaks, does a 180 and gobbles up the pass attempt.

Several hours later, Greenwald is running 400-meter sprints, his legs striding more effortlessly and less vigorously. He then heads over to the high bar, where he leaps over the bar headfirst with his chest pointing to the sky.

Greenwald has a been a multisport athlete throughout his life, having played football since kindergarten and basketball from fifth grade through freshman year of high school. Now, Greenwald balances practices for both the junior varsity football team and the varsity men’s track and field team.

On the gridiron, Greenwald lines up on the inside or the outside as a wide receiver. On the track, he is a high jumper and a sprinter in the 400-meter race.

“Football has always been my passion,” he said. “Football has been something I couldn’t stop playing. Track is something I picked up my junior year of high school, and I just fell in love with high jump, and now I feel like I just really want to keep getting better at that.”

Greenwald said he decided to join the track and field team at the end of his sophomore year of high school after seeing his friends play for the team.

“I feel like you’re together as a team much more in football,” he said. “Competing as a team is really fun. … It’s like a brotherhood thing. Like in football, people always say, ‘Don’t play for you. Play for the person next to you.’”

Greenwald is 6 feet 1 inch, and while it is not unusual for a wide receiver to also be part of a track team, Greenwald is currently the only one at Ithaca College to be on both the football and track and field team. Wide receivers are used to running hundreds of yards per game, so it translates well to the track.

When he arrived on the South Hill last fall, Greenwald said, he originally planned on playing just football for the Bombers. However, over time, he said, he felt he had what it takes to not only do track and field, but also be successful in the sport.

He then contacted Jim Nichols, head coach of men’s track and field, and expressed his interest in joining the team. Nichols said he relishes individuals who are athletically diverse, which made Greenwald a perfect fit for the team.

“Rob adds that dynamic of a very intelligent, competitive young man that desires to be the best that he can be,” Nichols said.

Greenwald has different styles in the two sports, although he said he is very competitive in both. At the line of scrimmage on the football field, he said, his mindset is on beating the person in front of him up and down the field. Before a track and field meet, he will check the standings of an opposing team, and if he sees someone who recorded higher numbers than him, he will use that as motivation.

Greenwald said there have been conflicts in terms of practice and workout scheduling between the two sports. However, he said one of the main conflicts is more physical-based, rather than agenda-based, especially before a weekend track competition.

“My body can’t really handle all that all week,” he said. “So I have to pace myself. Thursday [and] Friday I obviously won’t lift with football. Or I just won’t lift at all because you can’t lift that close to a meet.”

Greenwald also said he has already pulled his hip flexor during a practice for track and field.

At the Empire 8 Conference Championships on Feb. 11 in the Hutton Dome at Utica College, Greenwald finished in third place in the men’s high jump event over teammate Andrew Ward. The senior said the fact that Greenwald plays two sports says a lot about his character.

“I think it speaks to his dedication,” Ward said. “He really commits himself fully to his offseason football training. But that doesn’t keep him from coming to track practice half an hour early to warm up with the team.”

“I think it’s a lot easier to focus on one sport, but if you’re really good and passionate about two sports, I don’t see why you wouldn’t do both,” he said. “And if you contribute to both of the teams, then I think you should do both sports if you’re that passionate about it.”

Track and Field competes at the Bomber Invitational