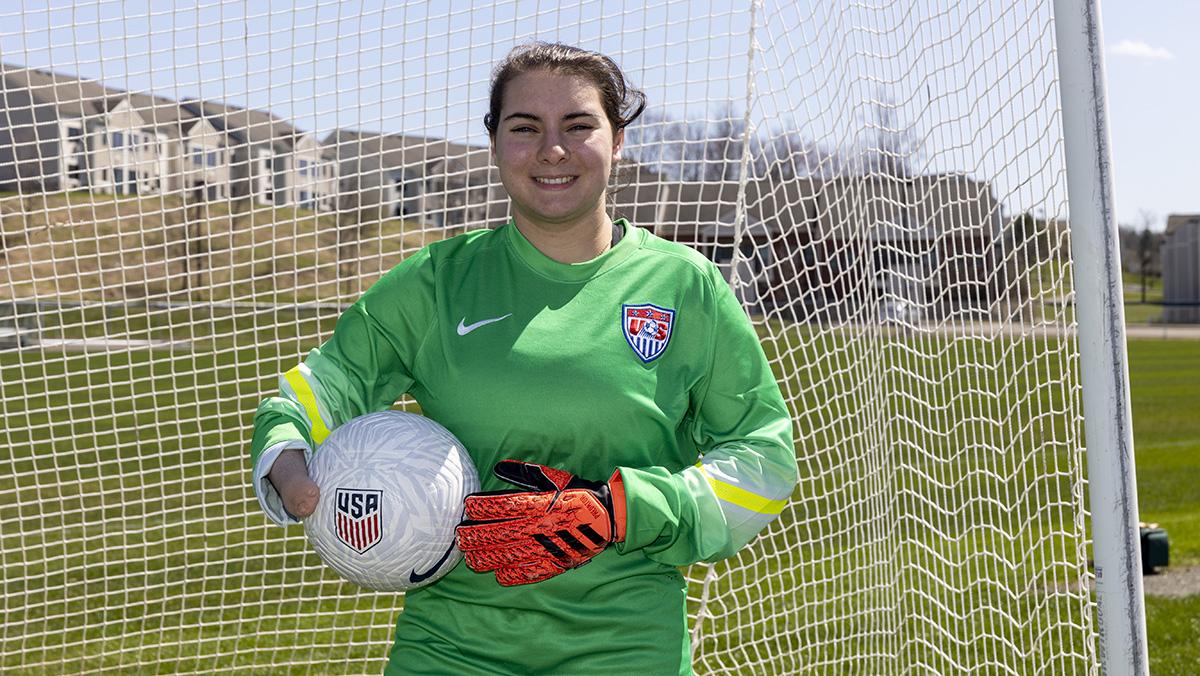 Ash Bailot/The Ithacan
Freshman Alexia Michitti, who plays for the Ithaca College women's soccer team, was born without her right hand. She has played soccer since the age of three, but was only introduced to adaptive sports in 2021.
By Dustin Terry — Staff Writer
Published: April 28, 2022

When freshman Alexia Michitti was in seventh grade, she was cut from her middle school basketball team. It was the first time that Michitti — who was born without her right hand — had been told she could not do something because of her upper limb difference before.

Michitti said her parents did not expect for her to be born without a hand, but she felt that she and her parents had the option to feel sorry or attack the world.

“During my mom’s pregnancy, they didn’t see anything that needed to be brought to attention,” Michitti said. “When I came out, I rocked the world, which is the way I like to put it.”

Since then, Michitti, who is on the Ithaca College women’s soccer team, has become a voice for athletes with disabilities and has had the opportunity to work with the U.S. national amputee team. In Fall 2021, she was introduced to adaptive sports, also referred to as parasports. Adaptive sports are sports played by athletes who have different types of disabilities with many established leagues and organizations representing these athletes, such as the Paralympic Games.

“I didn’t really know about adaptive sports,” Michitti said. “My whole life, I’ve just played with people who have no disabilities.”

Ellen Staurowsky ’79, professor in the Department of Media Arts, Sciences, and Studies, connected Michitti with the world of adaptive sports. Staurowsky began working with disability in sports when she was in high school, where she first worked with a local Special Olympics group. Through her work in parasports and through her students, she has maintained connections during her career.

“The experiences of trying to learn how to best serve [students with disabilities] has been something that has been a lifelong work for me,” Staurowsky said. “Our students come in with so many different experiences and different ways of living, so that has always been a part of consciousness.”

Michitti spoke at an event as an athlete for U.S. Disability Soccer Month in December 2021. After speaking, she received a direct message from Eric Lamberg ’96, head coach and president of U.S. Amputee Soccer.

Lamberg graduated from the college with a bachelor’s degree in health and science and earned his master’s in the physical therapy program where he took an interest in prosthetics and orthotics. He brought together his passion for soccer with his career work to become a driving force for the growth of amputee soccer.

“[Amputee soccer] is meant to allow for these people who are living with limb difference and limb loss to play in an environment that lets them excel,” Lamberg said. “When this sport was created, it was formalized and it was more of a recreational piece and a lot of players had trouble making it for a half, but now we’re seeing the endurance level has changed.”

After discussions with her parents and support from her team, Michitti, a native of Vestal, New York, joined the Metro New York Amputee Soccer Team, where she has been training over the past few months.

On April 2, Michitti had the opportunity to play at Gillette Stadium at halftime of the New England Revolution versus New York Red Bulls game in Foxborough, Massachusetts. Michitti and her team wore the Red Bulls jerseys as they played the New England Amputee team.

“When she started talking to [the team] about it, she just lit up,” head women’s soccer coach Mindy Quigg said. “We were just thrilled that she had that opportunity and she went out and competed, represented herself and our program.”

For amputee soccer, the players on the field play with one leg on crutches, while the goalkeepers play with one arm. Although Michitti plays forward in college, she plays goalkeeper for the Metro New York Amputee Soccer Team, tucking her right arm into her jersey.

New England won the game by a score of 3–2 with Nico Calabria, captain of the U.S. national team, scoring all three goals for New England. Despite the loss, Michitti said the experience of the game was still positive, being an 18-year-old woman playing with and against adult men.

“I was the only woman on the field, which was awesome,” Michitti said. “I had 35-year-old men shooting at me. Although they have one leg, you would be amazed at how strong their shots are.”

The national team will travel to Turkey to play in the Amputee Football World Cup this fall, but Michitti will not go, having just joined the team in December. The team is currently for both men and women, but a new women’s team is being developed, and Michitti plans to be the goalkeeper of the inaugural team.

Lamberg said Michitti has been part of the movement spearheading the creation of the women’s national team. He said that as the sport has grown over the past decade, women were not being included at the national level to the same degree as men, so it has become more important to start a specific women’s team.

“We need to get our women’s game going and have [made] an effort to find people living with limb loss and get them engaged,” Lamberg said. “[Michitti] sees that there’s a huge opportunity to be a trailblazer and represent her country on a national stage.”

Staurowsky said she is glad Michitti has been able to be an active part of the team and the future growth of the sport. For a figure like that to attend the college makes it even more special for Staurowsky.

“I don’t think there can be anyone who is a better representative and someone who is a better spokeswoman on behalf of women athletes with disabilities than her,” Staurowsky said. “We’re very fortunate to have her as a student to contribute her voice and her sensibility about how to make change in the world.”

Outside of her sport, Michitti works with the Lucky Fin Project, supporting and giving resources to people with limb disabilities. She also works with the youth development program for U.S. disability soccer. She hopes to inspire others by being herself and showing people that they can push themselves beyond their perceived limitations.

“When you push yourself, you really realize the strength you have had the whole time,” Michitti said.

Michitti said she strives to help end inequalities that are present between athletes with and without disabilities. Although not all athletes with disabilities can be integrated into mainstream sports, she said she knows the opportunities are there for athletes.

“My ultimate goal in life is to break the divide between athletes with and without disabilities like the Olympics and Paralympics, kind of meshing them together,” Michitti said. “Seeing what’s limiting people from reaching their full potential and get to the level of competing with those who don’t necessarily have a disability.”

Michitti sees herself doing that now in college, playing mostly alongside athletes without disabilities as she always has. One of her biggest challenges in collegiate soccer was strength training. But with the assistance of new prosthetics and strength coaches, she has learned to bench press and do pull-ups — things she could not do before college without the prosthetics.

“She has made tremendous strides in her game and has gotten a lot stronger now that she is able to lift differently than she ever has been,” Quigg said. “It’s making big improvements to her game and it’s exciting to see that progress.”

Quigg said Michitti shows personality and hard work when she is with the team. She takes full advantage of every opportunity and is very focused in everything she does.

Michitti has also gathered a big social media presence, currently having almost 50,000 followers and 1.7 million likes on TikTok, where she posts videos of her everyday life and accomplishments.

“It’s the little things that are really the big things,” Michitti said. “I’m doing a lot of things that I don’t think a lot of people think they could do with a disability and [showing] the idea of pushing yourself to the best of your ability.”

She also posts videos of her freestyle juggling with soccer balls, a talent she has been working on since seventh grade. When she turned 16, the Red Bull freestyle team invited her to freestyle with them. She is now waiting to join the team officially since she is now old enough.

“Promoting that is just something that I enjoy doing, but I ended up getting something out of it, which is always a great thing,” Michitti said.

Michitti is enjoying her time at the college, majoring in sport management. Though she is unclear of the exact route she wants to take, she said she wants to be involved at the Olympic and Paralympic level to break some of the divide between athletes with and without disabilities.

Michitti said she is unsure where her career may go, but she plans to continue playing amputee soccer and breaking barriers in the world of sports to become an advocate for others.

“There is no challenge that she has faced that she has not addressed head-on,” Staurowsky said. “[She’s] just been so committed to making life better for other people.”