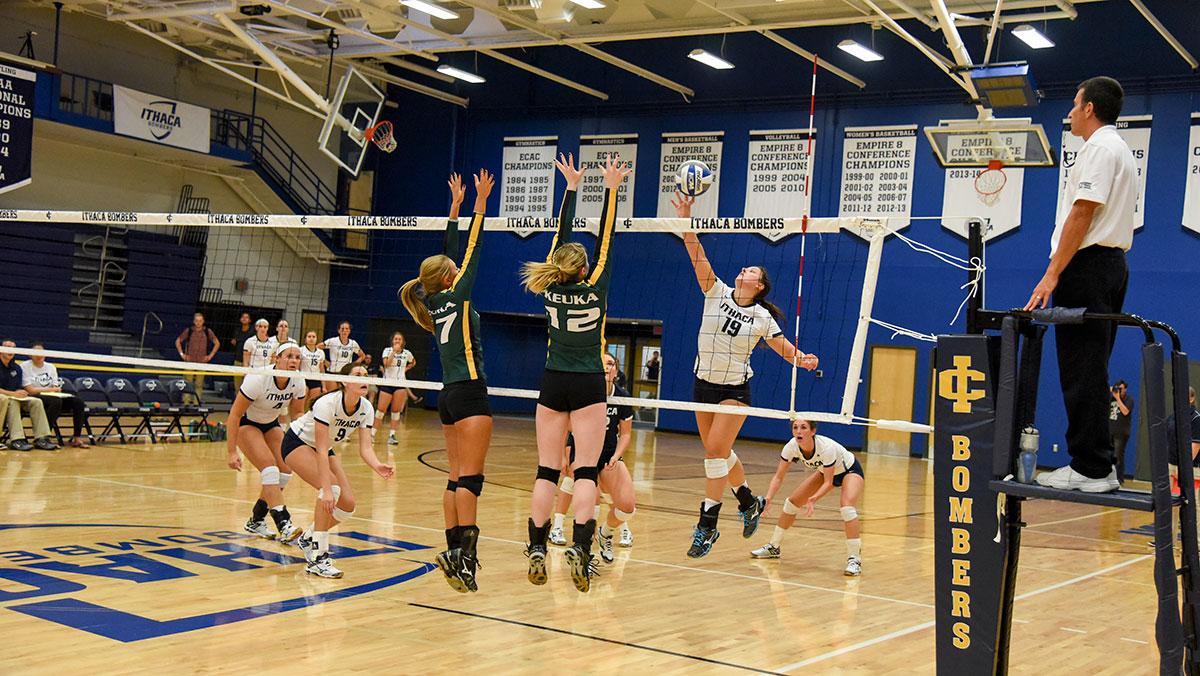 Jennifer Williams/The Ithacan
Freshman Hailey Adler goes in for the kill during the volleyball match Sept. 23 against Keuka College at Ben Light Gymnasium. Adler has tallied 213 kills in her first season, which is good for third on the team.
By Madison Bess — Staff Writer
Published: November 10, 2015

Freshman volleyball player Hailey Adler knows all about what it takes to succeed. She was once a competitive level-10 gymnast, who was also involved in the HOPES and Talent Opportunity Program. However, at the age of 15, she transitioned to volleyball due to injuries in gymnastics. Now a starting outside hitter for the Bombers’ volleyball squad, which just won the Empire 8 title and is headed to the NCAA Championships, Adler is embracing a new challenge.

Adler said she injured roughly 30 bones in her career and had two wrist surgeries, six screws in her wrists, a metal plate and two repaired ligaments.

Gymnastics consists of 10 levels, although most club gymnastic teams start from level four. Level 10 is the equivalent of collegiate level, and after level 10 comes elite, which is the Olympic level. Adler was forced to stop at the top of her game and said she picked up volleyball at the age of 14 and played more competitively throughout her high school career.

“I was still doing gymnastics at that time,” Adler said. “I broke my ankle at the first volleyball tryout, so I did not get to play club volleyball until I was 15 years old.”

Adler said she kept herself busy with volleyball, making the transition smoother.

“I played for a club called TCA, which was one of the highest-level clubs in the Philadelphia area,” Adler said. “I also found beach and grass doubles volleyball.”

The transition from gymnastics to volleyball, two completely different sports, is certainly not an easy thing to do. Adler said the transition was tough, but she is happy that it happened.

“I was so involved in gymnastics, spending almost 40 hours a week practicing and competing that it was hard to switch to a less competitive sport,” Adler said.

Adler said she was lucky enough to have a high school coach that spent time teaching her the game, and he became like a second father to her.

Adler said her favorite event in gymnastics was the uneven bars, in which she was a state champion.

“I do miss gymnastics,” she said. “Originally, after leaving the sport, I was going to work with special Olympic athletes, specifically who wanted to do gymnastics. However, due to a change in coaching staff, I was unable to do so.”

Adler said she misses the friendships she made at the gym, specifically her coaches who she described as her gym parents.

“It was all a big family,” she said. “Plus, there is just a thrill about gymnastics. Throwing your body through the air is a one-of-a-kind feeling that most gymnasts cannot describe. It’s almost addicting. However, volleyball has given me the opportunity to have that family again, which has been amazing.”

Adler said what she loves the most about volleyball is the team sport dynamic, as opposed to that of gymnastics, where gymnasts are ultimately competing against one another.

“In volleyball, you have to work together to achieve one goal, not beat out one another to win. It’s one aspect of volleyball that is not present in gymnastics, and it makes me appreciate my sport as well as my teammates,” Adler said.

Head coach Janet Donovan said these injuries have made both tougher and stronger athletes.

“She dealt with some injuries in gymnastics and then moving to volleyball, the different demands made her healthier,” Donovan said.

Freshman Kyle Dandrea, from Sandy Hook, Connecticut, had a similar career path to Adler. She said she quit gymnastics when she was transitioning from level seven to level eight at Vasi’s International Gymnastics.

Dandrea said she and Adler share similar traits in that they are both competitors.

“We have a strong competitive edge and intensity to us,” Dandrea said.

“It has helped her become a well-conditioned athlete and has helped her to be able to push through longer matches, even when she is tired on the court,” Mocarski said.

Mocarski said Adler also brings a strong and strategic attack to the team.

“She always stays aggressive at the net and knows how to get a ball down when we need to side out,” Mocarski said.

Donovan said Adler is a very athletic and powerful outside hitter, especially for a freshman, and Donovan has credited the team’s success in part to Adler’s play.

“We are very fortunate that she committed, and she is really contributing to the success of this team,” Donovan said.