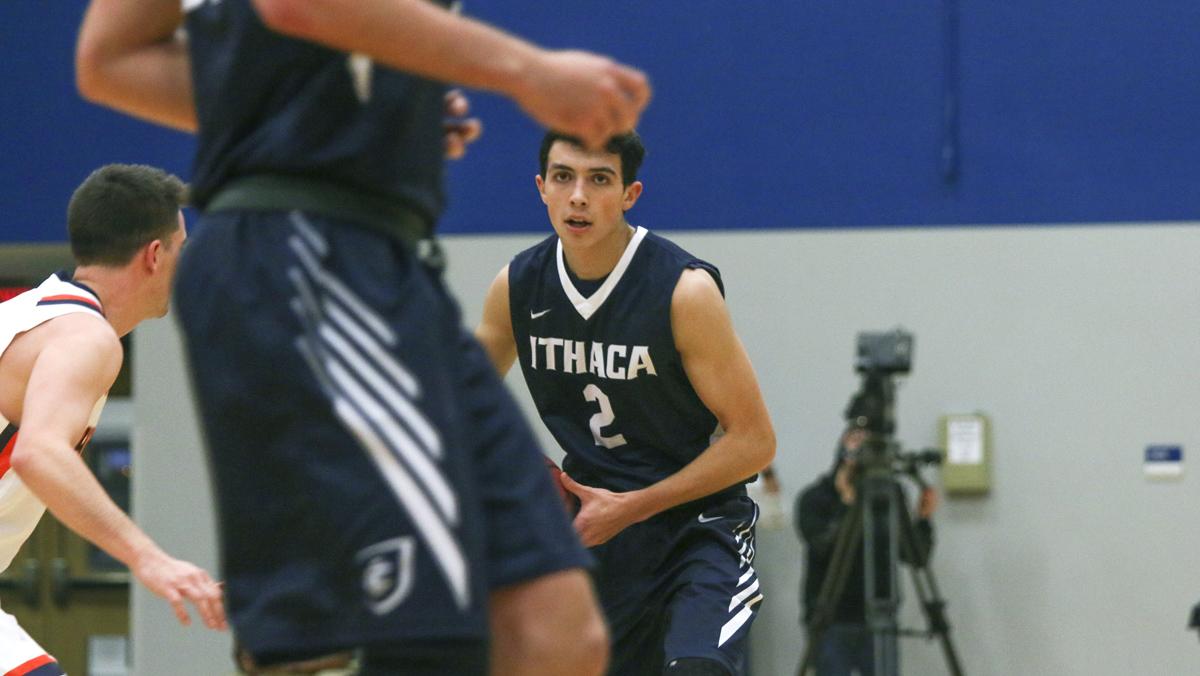 Most of the eight freshmen on the Ithaca College men’s basketball team haven’t started a single game this season. Upperclassmen, an unfamiliar coaching style and the recruiting class make competition for the few starting spots extremely tough for athletes in their first season.

However, freshman guard Skylar Sinon is the exception. Sinon has been a consistent star for the Bombers this season, starting in 13 of the Blue and Gold’s games so far and averaging just under 22 minutes per game. He scored a career-high of 17 points versus Bard College, sinking a career-high of five 3-pointers in the process as well.

The 6’2 guard is shooting 45 percent from the field while knocking down 38 percent of his 3-point attempts. He has averaged 6.9 points, with 2.4 rebounds, 2.4 assists and just below two steals per game. Sinon is also active on the defensive end, tallying three steals against Gettysburg College, Vassar College, SUNY Cortland and Union College. He notched a career-best five steals versus Clarkson University on Jan. 12.

Sinon entered the fall semester alongside seven other recruits brought in by head coach Jim Mullins. With key players, including junior guard Riley Thompson and senior forward Peter Ezema, returning for their junior and senior seasons, Sinon had to stand out during the team’s pre-season in order to earn his spot on the court.

“I just worked hard and listened,” Sinon said. “I took Coach’s suggestions on how to play within the system that the team already has set up. The current offense demands a much faster pace that’s very highly driven off pushing the ball. The most important part of adapting was to improve my conditioning and people to shoot accurately with more running involved in my game.”

However, for Sinon, this year was about more than his individual minutes. He is driven by the team mentality, which Mullins said he stresses amongst all of his players.

Matt Flood, senior forward and team captain, said that Sinon contributes to the squad beyond the stat sheet as well.

“I think, above Skylar’s great skill set on the court, he’s just a really great teammate,” said Flood. “His motor and hustle on the court is great, and he has a great attitude. He’s also emerged as a leader as the season has progressed. Sky has a lot of those intangibles, things you can’t really teach. We are lucky to have him.”

Hailing from Armonk, New York, Sinon attended Byram Hills High School, where he made the varsity team as an eighth–grader. He went on to set the all-time scoring record at his school with 1,657 points, breaking the previous record by over 500.

Sinon led his team on a number of playoff runs through the New York State sectionals tournament and beyond. This included three trips to the Section 1 Final Four, two berths in the Section 1 Championship game and a Class A section title in 2016 leading to a spot in the New York State semifinal game. As a senior, Sinon added to his illustrious career at Byram Hills by notching a 51-point performance versus Archbishop Stepinac, a team that would go on to win the state title that year.

Sinon displayed enough talent during his five years on the varsity team to garner the attention of several Division III schools. He considered Hobart College, Union College and Rensselaer Polytechnic Institute, as well as the United States Coast Guard Academy, before finally choosing South Hill as his new home. While he struggled at first to adjust, the freshman guard has gotten more comfortable both on and off the court since the season started.

“It was very difficult to settle in [at Ithaca],” Sinon said, “Not only was it challenging to balance my school work with my athletics, but it also took me a while to start playing well and feeling comfortable on the court at the next level … but the guys on the team are so much fun and I love hanging out with every one of them.”

The Bombers have only a handful of regular season games left until the Liberty League playoffs begin, and Sinon will look to keep contributing to the team in the final stretch of in-conference play. Regardless of how the postseason plays out, Mullins is excited for Sinon to continue progressing with the program.

“His work ethic and his hustle are the stuff future captains are made of,” Mullins said. “I’d like to have 10 of him if I could.”