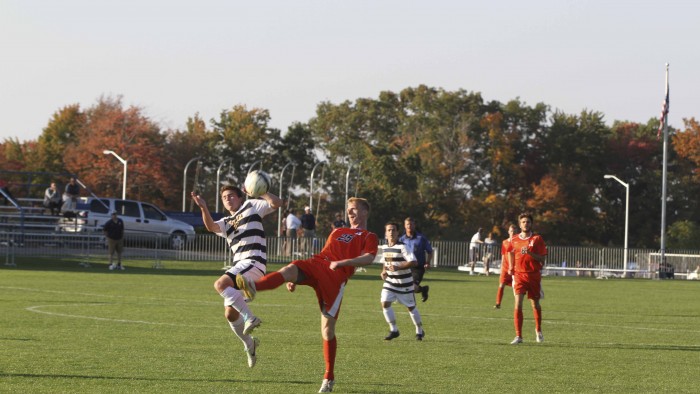 Sean Forward came to Ithaca College from Dover-Sherborn High School in Massachusetts to play soccer. Heading into this season, Forward knew he had to be ready to face the challenges of collegiate athletics.

“The coaches demand more from us,” he said. “I come from a small school where it was competitive, but it didn’t matter if we lost, it means more to play here.”

Coming from a 600-student high school to a 6,500-student college could be intimidating for many, but it hasn’t been too difficult for Forward. Early in the season, the freshman striker’s four goals lead the team.

The Bombers have 13 freshmen on a roster of 28 players, and many of them have stepped into big roles early in their college careers. Cobi Byrne, forward and fellow freshman, has started and played in every game so far. Freshmen Andrew Coburn and Sam Boylan have played in every game, and fellow first-years Scott Halpern and Ben Larson have each played in five of the team’s seven games.

Halpern said he is excited to be seeing significant play time this early in his first season, but he knows he will have to keep working hard to stay out there.

“As a freshman, you come in and try to compete as much as you can,” he said. “To be out on the field this much is a privilege, but it’s still early in the season, so we’ll have to keep working hard to stay out there.”

Despite getting the opportunity to play early and often in their first season, the freshmen had to adjust to new things. For a shorter player like Forward, the most difficult part has been taking on taller and bigger players.

Not only are the players bigger, but the game changes. Halpern said he picked up on this right away. The speed of the game and ball movement are different, and it is something these young players need to get used to.

“You think you have time, and then they’re just immediately all over you,” he said. “They are so much faster. This is why we run a lot in practice.”

Halpern also had to make these transitions while nursing a broken arm earlier in the year. He has played in five of the team’s seven games on the season with a bulky cast on his arm that extends down to the palm of his hand. He said if he doesn’t think about his injury, then it isn’t too hard to play with the cast.

“It definitely slows you down, but the mental aspect was the biggest challenge,” he said. “I had to try and play physically in practice. When going for a tackle, you can’t think about it, you just have to keep going.”

Not only do the first-year players have to learn what it is like to play college soccer, they also have to learn how to balance school and their sport. With a couple of hours of practice per day, they still have schoolwork to do. The key, for Halpern, is to focus strictly on soccer while on the field.

“We have to put school aside when on the field,” he said. “Coach always tells us we will be rusty during practice if we have too much on our mind, so we need to focus on soccer and school separately.”

The Bombers have no seniors on their squad this year. However, they are still experienced. Forward said the returning players have been supportive, and that has helped boost his confidence.

“They’re all really good guys,” he said. “They want to see us succeed, and they compliment us when we do something well. It keeps our confidence up.”

The older players are noticing the talent this freshman class has. Sophomore Kenny Chapman said what the freshmen bring to the table influences their team in positive ways.

“They give us a ton of depth,” he said. “They also bring a great level of enthusiasm and energy into the games.”

Forward didn’t know how much he would play in his first year, but his contributions so far make him want to continue working with his teammates toward success.

“I didn’t expect to be playing as much as I am because I’m a freshman,” he said. “It’s been good so far. It’s obviously a team game, and I want to help.”