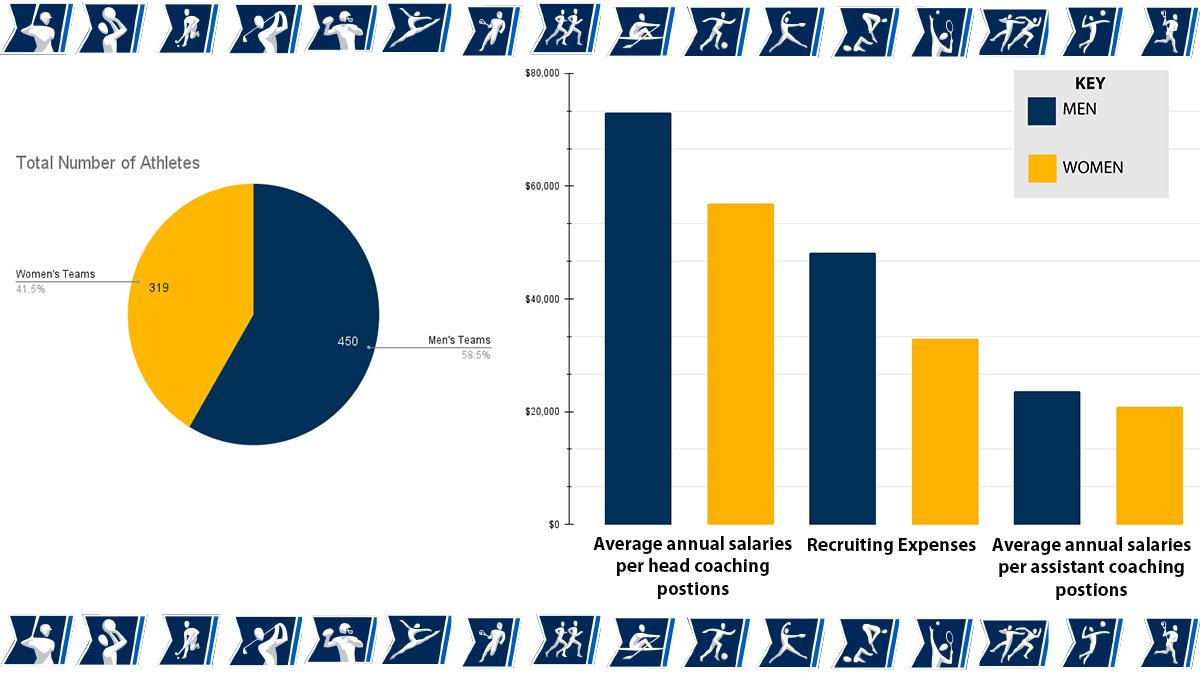 Abbey London/The Ithacan
Ithaca College's proportion of student athletes is nearly the opposite of its undergraduate enrollment, as the proportion of its student body in 2021 is 59% female and 41% male.
By Connor Glunt — Spots Editor
Published: September 16, 2021

Ithaca College Athletics is compliant with two out of three parts of Title IX. However, there are still questions about gender equity issues within the athletics department.

Title IX of the Education Amendments of 1972 is legislation that protects people from being discriminated against based on their sex in activities that receive federal assistance. It ranges from protections at colleges — including Ithaca College — within athletics, as well as education programs. In order for an institution to be compliant with Title IX, it only needs to satisfy one of the three parts of the legislation.

Title IX is broken up into three prongs of compliance: proportionality, expansion and accommodating interests. Proportionality refers to whether a school’s athletics programs have a proportional number of male and female students compared to the overall student body. Expansion is if a school can show that it has or is working to expand its athletics programs of the underrepresented sex. Lastly, accommodating interests is whether a school can show they are compliant with Title IX by meeting the interests of the underrepresented sex.

Susan Bassett, associate vice president and director of intercollegiate athletics and recreational sports, said the college’s current priority is providing an equitable and fair experience for all athletes, coaches and staff. Bassett said the quality of coaching, equipment and facilities are examples of that, but her focus for the future is working toward meeting the proportionality prong of Title IX.

“We’re probably at a point now, because undergraduate enrollment is changing, where it’s more female than male,” Bassett said. “We’re implementing roster management this year, on both the male and female side, to come into compliance with proportionality.”

Each year, the college fills out an Equity in Athletics Data Analysis (EADA) report, which includes information regarding athletic participation, staffing, revenues and expenses by men’s and women’s teams. In the 2019–20 EADA report, the college reported that it had 450 athletes on men’s teams and 319 athletes on women’s teams.

According to the Office of Analytics and Institutional Research, while the proportion of athletes is 58% male and 42% female, the proportion of the student body is nearly the exact opposite, being 59% female and 41% male. Additionally, undergraduate proportionality has largely stayed the same since Fall 2003, as the percentage of female undergraduate students has stayed between the range of 54.8% and 58.2% of the college’s student body. Furthermore, from 2003 to the most recent EADA report the college filled out, the number of unduplicated men’s team participants has been greater than the number of unduplicated women’s team participants each year.

The most recent data available for average roster sizes of Division III teams offered by the NCAA showed that the college had larger than average rosters in all women’s sports except for golf and volleyball. Erienne Roberts, Associate Director of Athletics, said the goal is for the college to have similar numbers roster-wise compared with the data the NCAA has provided them.

“What we would like is to just be consistent with some of the data the NCAA has provided through our sports sponsorship reporting and use that to compare ourselves to the Liberty League, as well as nationally ranked institutions,” Roberts said. “We want to make sure we’re serving our needs for our students based on admissions, but also consistent with national practices.”

One way Bassett and Roberts said they are considering to help resolve the issue of proportionality is by adding varsity sports like women’s rugby and cheerleading, which are currently club sports.

“The priority when you consider adding a sport, is that there be a viable competitive opportunity for them,” Bassett said. “For example, we can’t just add a sport that no one else is playing, or that we wouldn’t be able to realistically travel to. Rugby, that might be a good sport to add, except there’s not a similar league available, league opportunities like we have in the Liberty League.”

Senior Alyssa Denger, president of Ithaca College’s women’s club rugby team, has been a part of the team since her freshman year. Denger said if the club were to be promoted to varsity, it would be the product of years of hard work.

“I think it would be a great opportunity for players who want to be more serious with this sport,” Denger said. “I think our club has made huge leaps and bounds with our personal development over the past four years. … I think if we were to switch to varsity, it would be well deserved considering all the work we’ve done.”

Though the thought of campaigning for the team to be promoted to varsity status has not been on her radar, Denger said she thinks its promotion would be beneficial to the college’s desire to match its athlete proportionality to undergraduate student proportionality.

“Rugby is unique because it allows people who identify as female to play a sport that is most commonly related to football, which is mostly male-dominated,” Denger said. “So, I think it’s a safe space for females to try the sport. For promoting rugby, for me, it’s wonderful. But, also for allowing people who are non-binary or female identifying know they have this outlet and can play sports for [the college].”

The 2020 memo that Bassett wrote also stated that the college met all 11 program components that were established by the Office of Civil Rights equitably. Included in the list of components are equitable coaching and recruitment of student-athletes. However, in the 2019–20 EADA report, there are sizable differences in the average annual salaries for coaching positions between men’s and women’s teams, as well as the recruiting expenses for men’s and women’s teams.

Bassett and Roberts said the college satisfies the second prong of Title IX by having a history of expanding athletic opportunities for the underrepresented sex by adding women’s golf in 2009 and women’s sculling in 2012. However, Lance Houston, a Title IX and labor law expert, said he believes the college still has impartiality between men’s and women’s sports.

“[The EADA report] shows a history [of expanding women’s athletic opportunities], but I’m not sure that there’s an actual achievement only because the numbers tell a different story,” Houston said. “The numbers show the possible inequity in terms of [the college’s] budget. I think the EADA report shows that quite plainly. … It seems to me that while I think the school is working towards gender equity, there appears to still be a gender equity issue.”

Houston was cited and quoted by the U.S. Department of Education Office of Civil Rights as a source authority in its May 2020 Title IX Final Rule Regulations. Houston most recently worked for University EEO, Inc. in Cambridge, Massachusetts as a chief consultant on educational employment opportunity and Title IX.

Houston said though Ithaca College has improved in its Title IX compliance, he thinks there is more work to be done.

“I think that Ithaca [College] has made strides to comply with Title IX, just one of my concerns would be the athletic opportunities for women,” Houston said. “The structure of the EADA report, the head coaches salaries and the assistant coaches salaries, that tells a story and the college has a burden to meet. … Certainly, just reviewing the EADA report, I have some concern over the college’s efforts to comply with Title IX based upon the numbers in the report.”

Bassett did not explicitly state that the athletics department had to make budget cuts, but the college is facing serious financial issues. During the 2020–21 academic year, the college eliminated 116 full-time equivalent faculty positions as part of the Academic Prioritization Program due to financial issues magnified by the COVID-19 pandemic.

Bassett said the college has accomplished fuller rosters in all women’s sports since she assumed her position in July 2013, but participation in golf, women’s tennis and women’s combined track and field have decreased since then, according to previous EADA reports.

Bassett also said the college has made improvements in coaching in women’s sports and facility improvements and enhancements, but will look to improve on its Title IX compliance in the future.

“I think what we have to do is both add participation opportunities for women and implement some roster management, and I have a plan that gets us there within the next two to four years,” Bassett said. “There’s two things. We can’t just keep adding women’s sports because at some point, the quality is going to be hard to maintain, and there’s just a limit. We have 27 sports right now. … I would argue that some of the larger sports sponsorships have a diminished level of quality, and we want to maintain a high standard within all of our programs.”

NCAA knows gender inequity exists but does not care

The creation of more women’s varsity teams is a progressive move for the college, acknowledging there is still room to improve when it comes to equality.