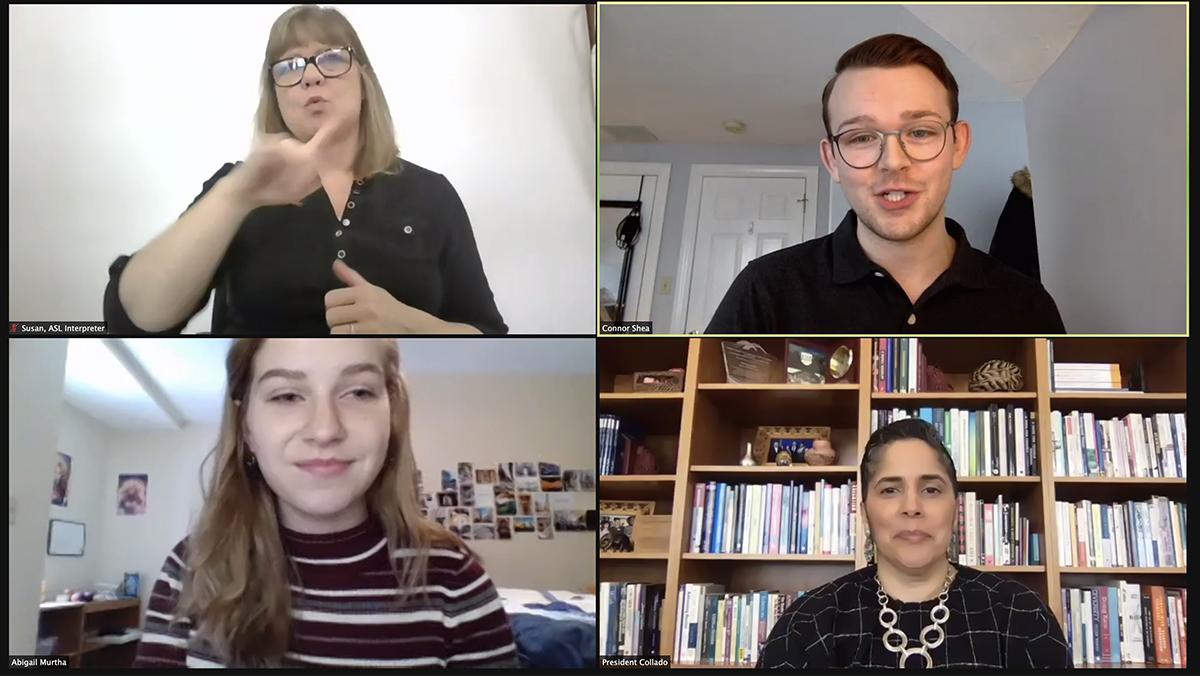 Ithaca College President Shirley M. Collado spoke about the financial state of the college and the urgency of the Academic Program Prioritization (APP) process at the All-College Gathering on Feb. 9.

Collado said the feedback period for the draft document closes next week, when it will be delivered to herself and La Jerne Cornish, provost and senior vice president for academic affairs, for approval.

“I want to be clear that the pandemic has intensified the urgency of this work, but it did not create the necessity of it,” Collado said. “The business model of higher education, are very real enrollment trends across the country. These challenges were here well before my team and I arrived at IC.”

Collado said she received multiple questions about the Open the Books coalition, a group that is working to prevent the cuts and is asking for financial transparency.

She said she is not ignoring any important, clear and instructive feedback she is receiving. She said students who have emailed her about Open the Books have received email responses from her or her office.

“I will take criticism, I will hear what you have to say, I just ask that that gets translated back into that I also have to make decisions,” Collado said.

Collado said there is no financial information that the college has not shared.

“I don’t know what else we can provide in the data, but you have my commitment that we will continue to provide, and repeat, and share,” she said. “Please know that you’re not being ignored.”

A person asked Cornish if the college has considered merging with Cornell University or if it has thought about merging its five schools to avoid the cuts.

“We have not considered merging with Cornell,” Cornish said. “When you read the [Academic Program Prioritization Implementation Committee’s] recommendations in full, it is recommended that we maintain the five schools.”

She said that when the college enters the second phase of restructuring, administrative positions will be examined. Collado said administrative and managerial roles have also been cut.

Collado said the college will end the 2020–21 fiscal year with approximately $7 million in COVID-19-related expenses. She said that cost can increase if the college needs to spend more money on COVID-19 resources and that the college may receive approximately $6 million from the federal government as stimulus funds to help pay for COVID-19 costs.

“Not even the $6 million from the federal government will cover the forecasted shortfall of COVID-19–related expenses,” Collado said.

Collado said the current budget deficit for the 2020–21 fiscal year is estimated to be approximately $24.5 million. She said it is primarily driven by expenses related to COVID-19 and the reduced number of students living on campus for Spring 2021.

“We cannot make decisions on the back of students and their success,” Collado said.

In response to a question about why the college cannot draw from its endowment to solve its financial issues, Bill Guerrero, vice president for finance and administration, said that the college already draws approximately 4.5% from the endowment annually, which is approximately $14 to $15 million per year.

Collado said that there are options for the college to take, but the issues that the college is facing will not be solved by a one-time withdrawal from the endowment. She said it is important to consider the future of the college.

In response to a question about the urgency of the college’s financial status, Guerrero said that from Feb. 9 to Aug. 1, the college does not have any cash revenue.

“The school does not have the exorbitant reserves that it had historically,” he said. “Looking ahead, you pull that into the next couple of years, you’re running out of cash and looking for other alternative measures. We’re not alone in this, with other institutions, but it is urgent to address this model and higher ed.”

Collado said the total enrollment for Spring 2021 is 5,264 students. She said that at this time last year, 5,960 students were enrolled at the college. She said 2,460 students are living in on-campus residences, as compared to the approximately 3,800 that were living on campus in 2020. This decrease has resulted in a loss of approximately $6.5 million in housing revenue.

“Reaching our enrollment goals is really important,” she said. “Retaining our students through graduation and their sense of belonging is just as important.”

Collado said freshman applications are running ahead by 2% this year.

Seniors Connor Shea, president of the SGC, and Abigail Murtha, senate chair for the SGC, provided an update on the SGC’s initiatives.

Murtha said students are allowed to help write bills and encouraged anyone interested to reach out to her.

Shea said the SGC is also working with Masks are Hot, a group that promotes COVID-19-safe dating, and Ithaca College Public Relations Student Society of America to create IC Students Together, a public health campaign.