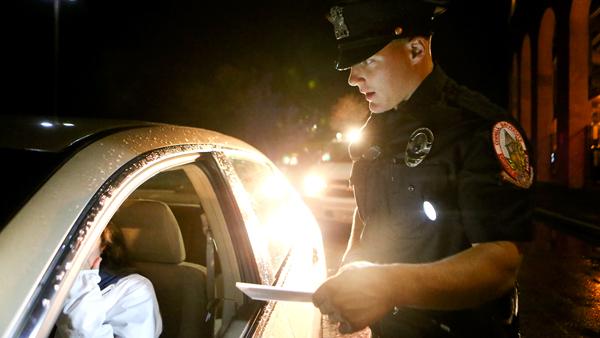 It’s 12:27 a.m. on a Saturday, and reports of street racing crackle over the police scanner. Cornell University police officer Mike Meskill speeds off toward the reported location. Working what’s known as “the graveyard shift,” Meskill patrols the Cornell campus from 11 p.m. to 7 a.m., but tonight he has been on the clock since 6 p.m. to combat the recent reported attacks and sexual assaults.

As Meskill arrives at the scene and exits his car, the scent of burnt rubber hangs in the air. Five cars are pulled over on Route 366, and it’s Meskill’s responsibility to defuse the situation. While on duty, Meskill exhibits the calm but forceful demeanor he also uses as an assistant coach for the Ithaca College men’s soccer team.

Meskill, a 24-year-old native of Trumansburg, N.Y., works primarily with the Bombers’ goalkeepers. Before arriving for his shift at Cornell, Meskill was working hard with the three keepers to prepare for Saturday’s game against Empire 8 Conference opponent Alfred University.

Though Meskill has only been a Cornell patrol officer since January, Sergeant Michael Blenman said Meskill has been a great addition to the staff.

“He is energetic, young, willing to learn and his work ethic is superb,” Blenman said.  “His attitude is great.”

The clock reads 2:33 a.m. when Meskill pulls over to the side of Campus Road. A car Meskill had pulled over earlier for having a headlight out is now involved in a car accident. The passengers appear unharmed, but tempers are high. Meskill keeps his voice level as he talks with each driver. Throughout the conversations he remains composed, with his shoulders back and eyes focused, listening to both sides of the story.

Meskill said he enjoys both of his jobs because he likes to interact with people and hold them accountable for their actions. However, players on the men’s soccer team want to be at practice, while people Meskill meets during his shift aren’t always as receptive.

“When I’m at practice, these guys are here because they want to be here and they want to work hard,” Meskill said. “When I run into most of the people that I deal with on a day-to-day basis, it’s usually because they did something wrong.”

Meskill, who graduated from Keuka College with a degree in accounting in 2010, said he is able to relate to students while on duty because of his age.

“Everyone makes mistakes, and we’ve all been to college, and I understand that,” Meskill said.  “I come into a good position there since I can relate to these kids because I basically just got out of college, and I can help them through a difficult time, make them accountable for their actions and move on.”

Green numbers glow 4:18 a.m. in the patrol car when Meskill finally has a chance to take a breather. Earlier that night, the scanner was constantly buzzing, but now the music on the radio is the only thing that can be heard. Fatigue starts to kick in as Meskill no longer has calls to keep him occupied. He drives back to the Barton Hall station and starts his paperwork. After an hour or so, he drinks a cup of coffee to help him through the final hours of his shift.

The sun is shining on Carp Wood Field as the men’s soccer team warms up for its Empire 8 matchup. It’s now 12:24 p.m., and Meskill is working with the goalkeepers before the game. He has only had a few hours of sleep, but his energy levels hide his exhaustion. Head Coach Andy Byrne said he can tell sometimes when Meskill has had a long night on duty when he arrives, but he added that the fatigue is gone once the drills begin. Meskill is involved in each drill he executes, constantly moving and taking shots to provide his players with feedback.

Freshman goalie Kenny Chapman said Meskill does not shy away from giving suggestions to the goalies, and that constructive criticism has helped all three keepers improve their skill level.

“You can make a great save, but there’s always something you can do better,” Chapman said. “No one’s perfect, and at first it was a little frustrating for everyone to adjust, but now we understand everything’s going to be critiqued, but that just makes us better. He gives us a lot of feedback and that’s good.”

Chapman said he likes how Meskill is knowledgeable about the “goalkeeper perspective.” Meskill has a lot of experience in this position at the collegiate level. He was a four-year starter at Keuka and was named the North Eastern Athletic Conference Goalkeeper of the Year in 2009.

Meskill knew when he first took the job at Cornell that he would want to be involved in coaching soccer during the fall season. That’s why he took the overnight shift. He was originally planning to help out co-worker Eric Stickel with the Lansing High School varsity girl’s soccer team, but things changed after Byrne offered him an assistant coaching position at the college.

Meskill first met Byrne when Meskill was a teenager playing for the late coach Chris Bond. Bond was the head coach of the Trumansburg High School men’s soccer team and was friends with Byrne. Byrne ran a nighttime soccer camp a week before the high school preseason for the team, the first time Meskill and Byrne crossed paths.

This past summer, Byrne had a part-time coaching position available and knew Meskill was in the area. Byrne said he is happy with his decision to hire his former camper.

“He has a passion for what he’s doing and will put in a lot of time beyond probably what he’s being paid for,” Byrne said. “As far as I’m concerned, he can keep the job as long as he wants.”

At 1:35 p.m., Meskill is standing on the sideline watching his team battle on the field to keep their unbeaten streak alive. During weekdays, Meskill would still be sleeping. Usually, after Meskill clocks out at Cornell around 7 a.m., he returns to his apartment in Trumansburg and darkens his room so he can sleep. During his down time between soccer practice and his police shift, he will fit in a lifting or cardio workout, eat dinner, watch some TV or take a nap.

Meskill has made several sacrifices to pursue both careers, such as giving up watching New York Jets games on Sundays, sailing on Cayuga Lake … and sleeping. Though this lifestyle can be challenging, Meskill said he wouldn’t have it any other way.

“I just want to be around the game,” he said. “That’s the reason why I chose nights over working evenings … I wouldn’t get the chance to continue doing something I love, so I’ll take a little sleep deprivation and get to coach and be around a great team like this any day of the week.”