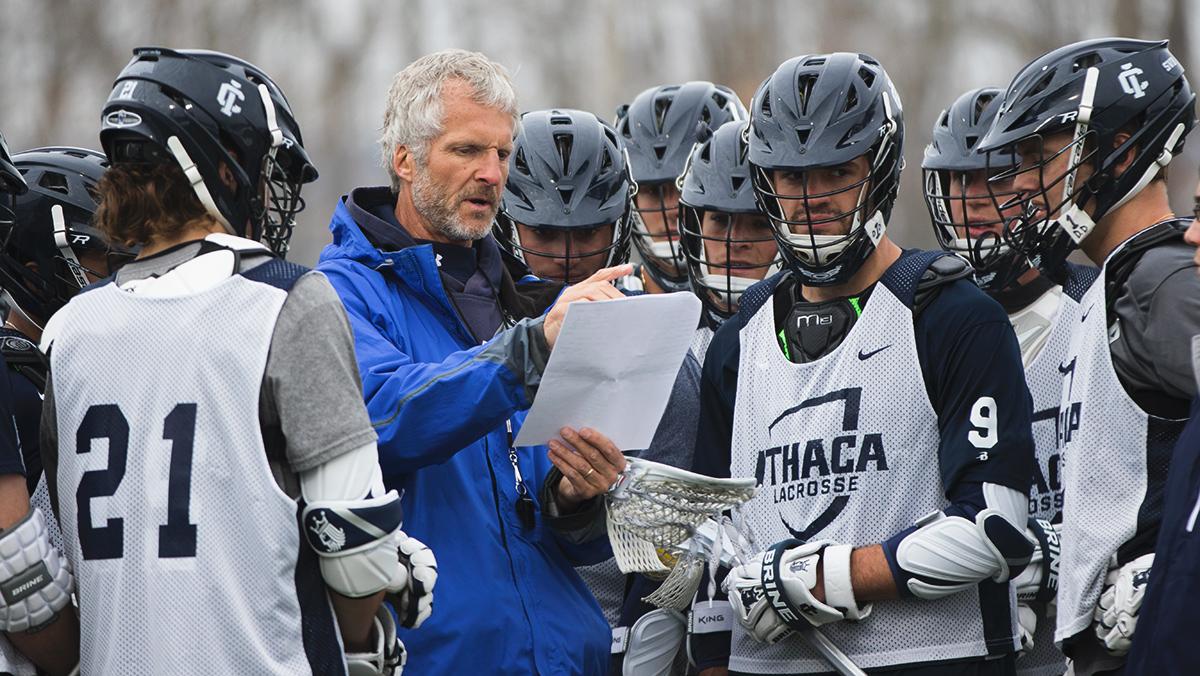 CONNOR LANGE/THE ITHACAN
The men's lacrosse team circles around head coach Jeff Long as he goes over plays during practice on March 20 that would be ran during its game against SUNY Oneonta March 21.
By James Murphy — Staff Writer
Published: March 22, 2017

After the men’s lacrosse team finished its game against Lycoming College on March 1, head coach Jeff Long congratulated his players on their first win of the season. However, there was more for Long to celebrate that day: his 300th career win.

Senior attacker and captain John Januszkiewicz said Long is more focused on seeing the team succeed and making the NCAA Championships in May than on his personal success.

“He’s really humble,” Januszkiewicz said. “He didn’t even mention it, to be honest.”

That success has been evident over the past two seasons. Last year, Long led one of the best offenses in the country — ranked third in Division III with an average of 16.97 points per game — to an Empire 8 Championship and to the NCAA quarterfinals. This year, the South Hill squad is off to a 6–0 start and is ranked fourth in the United States Intercollegiate Lacrosse Association coaches poll.

Long has been the head coach of the Bombers for the past 30 years. In that span, he has been an Empire 8 Coach of the Year six times and has compiled a 305–147 record. In 2009, Long was inducted into the National Lacrosse Hall of Fame.

His head coaching career began at the United States Naval Academy, his alma mater, as the coach of the “B” team. After his second season with the preparatory school unit, Long spent time coaching at Norfolk Academy, Alfred University, Washington and Lee University and the University of Virginia before becoming head coach of the South Hill squad in 1988.

When he first arrived on the South Hill, the team was struggling, as they had finished with a 9–16 record in each of the past two seasons. However, Long initiated a turnaround in 1991, when he led the Bombers to an Independent College Athletic Conference Championship — the team’s first in seven years — and a chance to play in the NCAA tournament.

He said that moment will forever stand out in his coaching career.

“People hadn’t celebrated lacrosse a lot before that, so it was a pretty cool moment for me,” Long said.

But he mainly credits the players he leads for the successes he has found.

“I didn’t score any goals or make any saves,” Long said. “It’s really about the kids that all came here and decided to commit to Ithaca College and put up with me for four years.”

During his junior season, Januszkiewicz had a career-high 47 goals and scored his 100th goal against St. John Fisher on April 13, 2016. In 2014, he was selected as the Empire 8 Rookie of the Year. In his sophomore and junior campaigns, he was given all–Empire 8 first-team honors.

While Januszkiewicz was in high school, he said, he was intrigued by how long the head coach had been with the college’s program and the success Long had with the Bombers.

Januszkiewicz said accountability is a big part of the team because Long expects everyone to bring their best every day.

“It creates a great culture and helps this team improve every single day,” Januszkiewicz said. “He pushes us out of our comfort zone to make each of us the best we can possibly be. The team and the coaches are never satisfied, which is why I think the Ithaca lacrosse program and coach Long have had such great success in the past 30 years.”

Jim Berkman, head coach of Salisbury University men’s lacrosse team, is the most winningest coach in men’s lacrosse history and has won 11 NCAA championships. Berkman has known Long since they played together in a central New York summer league in the early ’80s, and he said Long has always exceeded any expectations.

“He doesn’t really have any peaks and valleys,” Berkman said. “He’s been very consistent throughout his career.”

In 1989, Berkman’s first year with the Salisbury Seagulls, he led the team to a 9–5 record and an appearance in the NCAA Quarterfinals. Long, on the other hand, needed four years to get his team into the NCAA tournament. He also has yet to win a national title as a head coach.

Januszkiewicz said playing lacrosse under Long has not only made him a better player, but also a better person.

When looking back on his career with the Bombers, Long said he most appreciated watching the athletes grow from 17- or 18-year-old kids to mature young men in the span of four years.
“It’s not easy playing here and playing for us,” Long said. “It definitely tests people to survive for four years. So I think the biggest problem is seeing what the end product is when they graduate.”