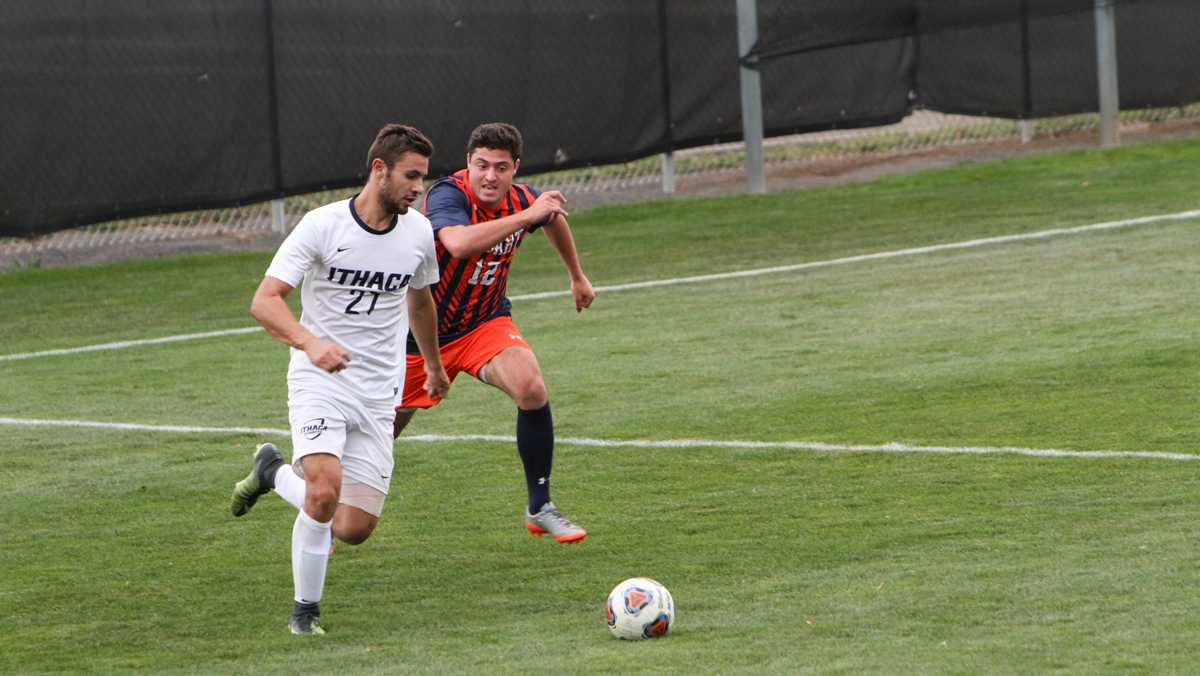 The Bombers’ press put Hobart under early and often, forcing several turnovers in dangerous areas. Head coach Kyle Dezotell said that was the game plan heading into the game.

“It transitioned from the game against St. Lawrence,” Dezotell said. “I think historically Ithaca has started slow against Hobart. I give our players credit. They recognized that, and it did not have to come from me.”

Dezotell said he was pleased with the defensive effort his team showed early on, and he attributed their numerous offensive chances to their effort at the other end of the field.

Junior Nathan Schoen played in a penetrating pass a minute into the contest that striker Nate Mansfield nearly got on the end of before Hobart’s keeper smothered it. Mansfield, again, nearly capitalized on a ball thread through the seam by sophomore Max Barish minutes later.

Hobart turnovers and quick Blue and Gold counters were a mainstay through the first 10 minutes of play. Perhaps the Bombers’ best look at a goal during that period came in the 8th minute when Barish connected with a half-volley atop Hobart’s penalty area. Barish’s shot was palmed away by senior goalie Morgan Sawyer.

Hobart was pinned in its own end for the majority of the first half, partly due to the Bombers’ relentless high-press.

Despite a few lapses of judgement in the back, the home side largely kept the visitors at bay, dictating the tempo and launching numerous balls over the top of the Hobart backline.

Both teams traded possession throughout the first half of the contest, although it was ultimately the Bombers who had the better looks at goal.

Hobart opened the scoring a minute into the second half. Senior forward Patrick Schultz latched onto the end of a cross from teammate Nick Wigglesworth in the 47th minute, heading it past the outstretched hands of senior goalkeeper Dan Hinckley.

The second half was a chippy affair. Senior midfielder Eric Hepler was shown a yellow card in the 56th minute after dishing a Statesmen defender to the floor after the play.

Hinckley got the nod over sophomore goalie Max Lichtenstein, who, according to Dezotell, was experiencing flu-like symptoms. The senior keeper made a big save in the 63rd minute coming out fearlessly to smother a Hobart player who cut to the byline and danced in on goal.

Hobart eventually put the game away in the 81st minute. Sophomore Ben Orr got in behind Ithaca’s backline and calmly finished past Hinckley.

The Bombers had one final look at the visitors goal in the 84th minute. Sophomore Tom Dillman’s blistering free kick was palmed out of play by Sawyer.

Although Ithaca dictated the game in the first half, the visiting Statesmen looked to be the more threatening side in the second, controlling large spells of possession and finding seams in the Bombers’ backline.

Captain Sam Factor said it was Hobart’s goal at the beginning of the second half that ultimately shifted the momentum of the game.

“At the end of the day it comes down to moments,” said Factor. “So far this season we have not been able to capitalize on them.”

“The reality is, for 60 or 70 minutes of all three of our Liberty League games we have been the better team,” said Dezotell. “At the end of the day, if we score a goal, or two, in those moments, in those 60 or 70 minutes, we probably win some games.”.

The Bombers are back at 12:00 p.m. Oct. 7. They will square off against fellow Liberty League side Bard College at Carp Wood Field.