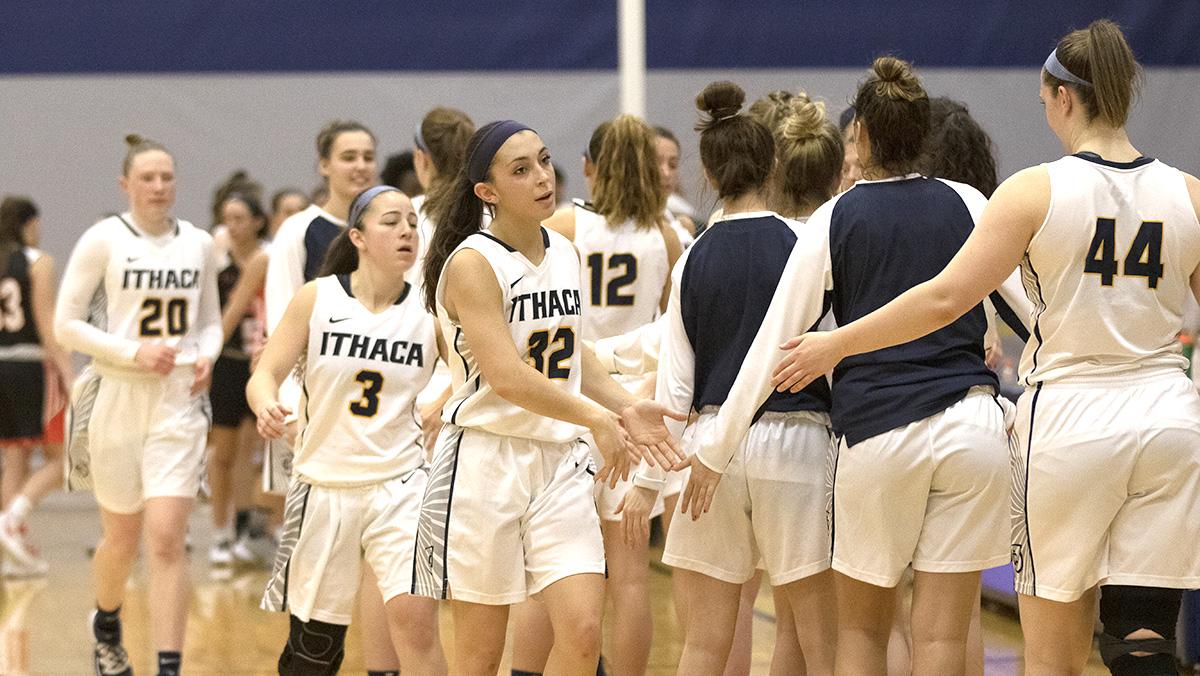 As the preparations begin for next year’s Cortaca Jug football game at Yankee Stadium, the Ithaca College men’s and women’s basketball teams are looking to join in on the festivities, because they plan to play games in the New York City area during the weekend of Cortaca.

The women’s team has already begun to lay the foundations for November 2022. Susan Bassett, associate vice president and director of Intercollegiate Athletics and Recreational Sports, said both the men’s and women’s basketball teams are scheduling contests that would allow the programs to attend the rivalry game Nov. 12, 2022. Along with the sporting events scheduled for the weekend, the college is holding ‘IC in the City,’ serving as its Alumni Homecoming Weekend.

“Our staff and students in the athletic department are really excited about it,” Bassett said in a Sept. 24 interview.

Dan Raymond, head coach of the women’s basketball team, said the team already has an agreement with Montclair State University for a game that will be played Nov. 11, 2022 in Montclair, New Jersey.

“As soon as I found out about this Yankee Stadium thing this year, I immediately made my list of who I wanted to play,” Raymond said. “My first call was to [Stevens Institute of Technology], they weren’t able to do it. So, then my next call was to Montclair [State University], who we have played in the past and I know that head coach there very well, so that’s how it all started.”

Raymond said he is excited for his team to be part of the Cortaca festivities next year and he is also excited that the game will be held in the Bronx next year.

“I think anytime that we can provide our students with opportunities that they wouldn’t typically have, it’s great,” Raymond said. “And so then for the student body to have the opportunity to go and watch a football game at Yankee Stadium, that’s just something that they’re probably never gonna have the opportunity to do again. So, anytime that the college can do anything like that, I think it’s a positive.”

Not only is Raymond looking forward to both getting to play during that weekend as well as experiencing Cortaca at Yankee Stadium, but the players are just as excited as well.

Junior guard Natalie Smith said she is looking forward to the opportunity to compete that weekend while attending the rivalry game.

“I’m glad that we get to play a game but then also go and support other Bombers,” Smith said. “We love watching other teams play, and especially [in] a big game like Cortaca. I’m really glad that we can all be there and support the football team and also get to watch such a big game ourselves.”

The women’s basketball team is no stranger to Cortaca trips. In 2019, when the game was held at Metlife Stadium, the team traveled to play The College of New Jersey the night before the Cortaca game.

Smith said the players are still grateful for their experience at the game in 2019.

“We had the opportunity to go to Cortaca when I was a freshman, and it was super fun and a really great experience,” said Smith. “So, I think everyone was just so excited to hear that we would be playing Montclair Nov. 11, because it’s just awesome to be in the area.”

“They had mentioned to me, ‘Hey coach, we didn’t even get to go to the MetLife game,’” Farid said. “I want them to be able to go to this game. Again, college is about experiences so I want our guys to have as many experiences as possible.”

Raymond said the game against Montclair State will provide an extra layer of excitement on top of the events of Cortaca, because the game will be early in the season for the women’s basketball team.

“The one thing that we usually do in a typical year, is we usually play in a tip-off tournament someplace,” Raymond said “So, in lieu of that, that’s what this game will do for us. We’ll get that out-of-league overnight game with this trip.”

Farid said the men’s basketball team does not yet have an agreement with Montclair State University or any other colleges for that weekend, but is hoping to finalize its plans in the near future.

“We’re in some talks with a couple teams hoping to iron out some details,” Farid said. “The plan is for us to be able to go down there and play a game on that Friday night and hopefully, play a game again on the Sunday. And then be able to go to the football game on Saturday.”

Farid said the program was already planning to play games in the New York City area during that weekend because there are multiple players on the team who live in the surrounding area, and they wanted to have the experience of competing in front of their families and friends. He said the venue announcement of the 2022 Cortaca Jug has simply prompted the team to look to schedule games that allow them to attend the game in the Bronx.

Farid said he is looking forward to his team having the chance to cheer on the football program and compete as a part of Cortaca weekend in 2022.

“They might forget some of the games they play in, but they won’t forget going to Yankee Stadium for a football game,” Farid said. “They won’t forget playing down close to home with how many family and friends came to the game.”