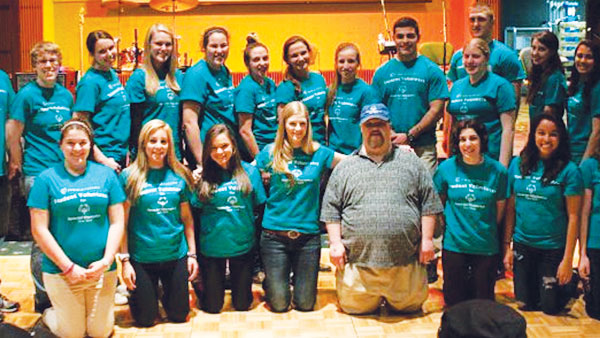 Courtesy of Dan Leibel
The Ithaca College Volunteers for Special Olympics gather together after hosting a dance for disabled athletes in the community.
By Steve Derderian — Sports Editor
Published: January 29, 2014

Senior Dan Leibel has always embraced a challenge. As co-president of the Ithaca College Student Volunteers for Special Olympics, he has coached several athletes with disabilities since he founded the organization in November 2011.

In February 2012, Leibel said he traveled to Greek Peak Mountain in Cortland, N.Y., to help athletes with disabilities ski and snowboard down the mountain. On this day, Leibel assisted an athlete with multiple sclerosis, an inflammatory disease that damages the brain and spine. Because of the affliction, the athlete is paralyzed from the waist down and struggles daily with fatigue and numbness, which severely limits his movement.

Though Leibel said he never worked with an athlete who had this condition before, he embraced the challenge despite the initial struggle. After securing the athlete’s feet into a pair of black ski boots and skis, Leibel had to help him shuffle back into a specially designed black-and-green chair with its own pair of skis attached to the bottom. Thirty minutes later, the athlete was ready for the ski lift.

“The whole time I was thinking, ‘I don’t know how a person who’s paralyzed from the waist down is going to be able to ski,’’’ Leibel said.

Leibel then helped the athlete back into the chair. It also has two armrests that extend to the side that the athlete can use for ski poles. With the help of three other volunteers, Leibel helped push the athlete toward the ski lift holding a harness attached to the skier. Leibel said with the entire process taking more than an hour, reaching the top was an accomplishment in itself.

“This day was the athlete’s seventh year in the program, and I was with him the first time he made it all the way to the top of the mountain,” he said.

At first, Leibel said, he was unsure if the athlete could complete the run to the bottom of the slope. But when he took his position with the other volunteers standing on either side of the athlete, the team was ready to descend. Leibel’s job was to ski backwards and encourage the skier while making sure he didn’t lose control of the harness, which helps the athlete control the direction of his path using his upper-body motions. When the athlete finally reached the bottom of the slope, Leibel said, his face was glowing with pride.

Despite a 1 ½ hour process for a less-than-two-minute descent, Leibel said he is continually amazed with what Special Olympic participants accomplish in an extreme winter sport such as skiing.

“I would have never assumed that a person with [multiple sclerosis] could get on skis,” Leibel said. “It’s been important and inspiring to me to see a person ski down a mountain regardless of any physical barriers.”

Because Leibel’s parents work for the New York State Office for People With Developmental Disabilities, he was interested in joining an organization with the purpose of assisting people with disabilities. In search for a similar group his sophomore year, Leibel said, he attended a “Spread the Word to End the Word” rally hosted by the Recreation and Leisure Studies majors program.

When Leibel discovered no such organization existed, he began the on-campus Special Olympics volunteer organization, which he said was to improve the lives of people with intellectual disabilities through participation in competitive athletics. Leibel contacted Janet Krizek, area coordinator of the Special Olympics for the Southern Tier region of New York State, in Spring 2012 to help promote his newly founded group in the community. Despite his initiative, Leibel said the group struggled in the beginning, as only four members attended the inaugural group meeting.

However, after logging hours volunteering with swimming and basketball at the Ithaca Youth Bureau, Leibel said the group had 70 registered members by the beginning of Fall 2012.

“The response was unprecedented,” he said. “I’m not sure if people were waiting for a group like this. I think Special Olympics is very accessible to college students. Most college students enjoy sports in some way. It’s a low-stress environment, and I don’t think it’s intimidating.”

Senior Jessica Caracciolo was one of the first volunteers for the college’s Special Olympics group. A speech-language pathology major, Caracciolo said she has always been interested in helping children and adults with physical and speech-related disabilities.

“I want to work in the health care field, so being part of Special Olympics gets you meeting a lot of people with similar interests,” she said. “You also feel good about volunteering your time, especially for something as fun as the Special Olympics.”

Even though she never played the sport, Caracciolo worked with Special Olympians in basketball. She said the head basketball coach would assign her to help with drills like layups, where players form two lines and partner up so one person dribbles toward the hoop while the other rebounds, and then the two switch lines.

One time, she accidently told the players to go back to the same line, and they corrected her, Caracciolo said. As a result, she said she learned from the athletes on top of teaching them.

“Even though you’re their coach, I found that a lot of the time they knew more about the sport than I did,” Caracciolo said. “We would run drills, and sometimes the athletes would correct me and tell me where they were supposed to go.”

Caracciolo said the experience was awkward initially because she wasn’t familiar with basketball, but she said she found opportunities to teach important life lessons regardless of her athletic ability.

“I think what [the Special Olympics] hone in on is teamwork,” she said. “By playing a sport with anybody, it forces you to rely on someone and build trust, even if it’s as simple as passing the ball.”

Caracciolo said she developed a habit of taking an interest in the athletes outside of their respective sports. When the organization hosted a Halloween dance for the athletes, their families and the college community, she said she sat down with certain athletes to help them open up and become more comfortable around the crowd.

“At one point, one of the athletes just took over the dance floor,” Caracciolo said. “It was just nice to see her out of her element just for a minute and being free.”

Sager is the president of IC Autism Awareness, an organization she began as a sophomore in January 2012. After doing volunteer work with the Special Olympic athletes with mental disabilities, she decided she wanted to work specifically with autistic children.

Sager said sport is one of the most powerful ways to connect with people with disabilities because of its popularity among other youth and adults.

“I think that a lot of kids with autism and disability don’t get a lot of exercise because their days are so structured,” she said. “There’s something about swimming and swimming pools that calm things down beyond belief. It gives them an opportunity to do something more than in other places. Kids like to play sports, and it’s more fun than anything else.

Sager said she has learned to become adaptable in different situations because of the variation of youth she works with in the community.

“Sometimes there are kids who don’t want to swim or do the activity, but when they see the rest of the group, more times than not, they end up joining in at the end,” she said. “It doesn’t always work, but even if it’s as simple as trying to get a kid to put their feet in, you just try to encourage them to participate and join in.”

After all the training and volunteering, the college’s volunteers for Special Olympics are raising funds to help send athletes to the annual Winter Games of the Special Olympics, which will take place Feb. 21–23 in Syracuse, N.Y.

Leibel said he wants to get the funding to give the athletes a chance to compete. However, he said his organization’s ability to grow and change the lives and attitudes of others at the college and in the community is more meaningful than the games and activities.

“Being the president of this organization has been one of the best aspects of my college career,” Leibel said. “It has given me insight into how a small group of people can have an impact on the community and find ways of changing attitudes toward disabilities, and our organization has proven that we can do it.”

This article has been revised to reflect the following corrections. Correction, Jan. 31, 2013:

The Ithaca College Student Volunteers for the Special Olympics was founded in November 2011 not spring 2012.

The skiing athlete mentioned in the beginning of the article was not a part of the Special Olympics. Leibel also assisted him in February 2012 not December 2013.