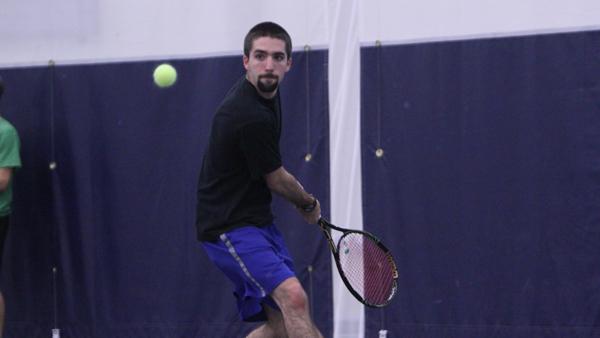 Emily Fedor/The Ithacan
Senior captain Kyle Riether hits a ball during a practice on Monday in the Athletics and Events Center. Riether is coming back after an injury to his labrum that he suffered last year during the Empire 8 Championships.
By Matt Constas — Staff Writer
Published: April 3, 2013

Senior year is the last time for most college athletes to achieve the goals they set for themselves as freshmen. Senior tennis captain Kyle Riether was almost denied that opportunity after an injury, but he is working to get on the court for the first time this year and achieve his goal of winning an Empire 8 Championship.

He tore his labrum in last year’s Empire 8 Championship match and is rehabilitating after the surgery he underwent three months ago. Originally, Riether said he believed he pulled a groin muscle and was treating the injury as such. After seeing a doctor in November, he found out that it was actually a tear.

Riether said he wants to return to the court as soon as possible, but that return will require something he is quite short of: time.

“The number one thing that will aid my recovery is time,” he said. “The unfortunate part about that is it’s my senior season, and I don’t really have time to spare.”

Riether said he is currently at 65 percent of the way back to full strength. He said there is no timetable for his return, but ideally he’ll be back before the end of April. However, he said he doesn’t want to return until he can win matches for his team.

He said the rehab process has been difficult and that much of his time is spent working back to his old self.

“I felt like I lived in the A&E Center for the past eight weeks,” he said. “I’ve been doing strengthening three days a week and aquatic therapy two days a week. Most of my exercises focus on strengthening the muscles around my hip.”

Off to a 1–8 start, the Bombers are looking forward to Reither, their only senior and team captain, returning to play. Junior Griffin Reid said Riether is always in it for the team, and his effort on the court motivates everybody else and makes beating him difficult.

“He’s an extremely steady player who you know you will get the best effort and heart out of in every single point he plays in,” he said. “It is difficult for many to match his intensity and will to win.”

Sophomore Justin Levine said with a healthy Riether on the court, the Bombers will be set to do a lot of damage in the conference.

“He is just a great player and one of the best competitors I’ve ever played with,” he said. “When he comes back, he will provide even more leadership and more wins in singles and doubles.”

While sidelined, Riether said he has embraced the new role of acting as another assistant coach. He is the only player who has been on the team for the past four years, and he said he is willing to do whatever he can to help his team win.

“I try my best to motivate the guys at practice and during matches and offer whatever advice I can with technique or strategy,” he said. “Being the only senior, I do have a lot do experience, so I’ve just been trying to pass on as much of that as I can.

Reid said because they have such a similar style of play, he has learned from him and his game has improved because of it.

“Playing against Kyle has made me have to step up my game and has taught me that I cannot just rely on my consistency, being that there are other players who are just as consistent,” he said.

Riether said he wants to be out on the court, but at the same time, he is prepared to embrace any role that he has to because of his want to win.

“I can certainly give us a boost, not only on the court but emotionally during matches,” he said. “I think putting a healthy me in the lineup gives us the best chance at a championship, but I’ll do everything in my power to help the team win, whether it be on the court or off it. It means the world to me.”