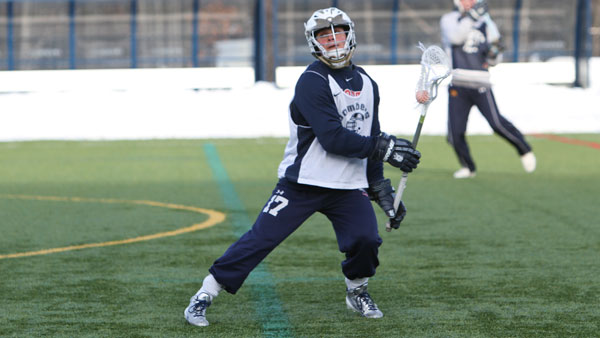 Though the men’s lacrosse team’s schedule only lasts for two months, junior midfielder Matt Greenblatt will continue to play into the summer on a schedule that is much longer than those of most collegiate players.

The Israel Lacrosse Association announced in the beginning of February that it selected Greenblatt to compete with the men’s team for the 2014 Federation of International Lacrosse World Championships in Denver this July. Greenblatt participated in interviews, played in scrimmages and endured a two-week tryout to be one of the 46 players selected to be on the team out of approximately 150 men. The Federation of International Lacrosse was established in 2008 and holds the international championships annually.

Greenblatt traveled to Israel on a Birthright trip in the summer of 2013 with the Mayanot Israel organization. A Birthright is an all-expense paid trip to Israel for Jewish Americans aged 18–22 to understand more about their religion and heritage. Greenblatt’s birthright happened to fall a couple of weeks before the tryout.

While wearing the official Israel Lacrosse Association polo shirt, he said it was an unexpected but fortunate coincidence.

“Once my Birthright ended, they had a league where we could just play in the cities,” Greenblatt said. “I had a great experience of being with everybody and being in Israel.”

The Israel Lacrosse Association was founded by Scott Neiss in 2010. During Neiss’ Birthright, he realized that lacrosse hadn’t been discovered in Israel. He created the team with financial and organizational assistance from the Federation of International Lacrosse.

Recently, many college players have been moving to Israel to promote and build up the program. Greenblatt said though he had trouble communicating with some of the Israeli players on the team, the experience was nothing short of rewarding. Greenblatt became friends with other players who were staying in Israel to tryout. The players worked together to help Israeli children learn lacrosse.

“We would do clinics with little kids,” he said. “Although I couldn’t communicate with these kids because they speak Hebrew, I was able to tell them what to do by playing lacrosse. It was a form of communication.”

After the two weeks of preparation, tryouts were held at the Wingate Institute, the Israeli Olympic facility. About 70 percent of those trying out were American citizens. The other 30 percent were Israeli. The federation will divide the 46 players picked in Israel into two teams of 23 when the team travels to Denver in July. One team will play exhibition matches against various countries. The other will be given the opportunity to play in the championships, which Greenblatt calls the “Olympics of lacrosse.”

Last season, Greenblatt had 64 faceoff victories and scored one goal on the season. Working in the offseason, Greenblatt said Jeff Long, 26-year head coach of the men’s lacrosse team, is pushing him to be his best before the games. Long said he is not surprised that Greenblatt was chosen for this position.

“He is just one of those guys that does everything when no one is watching,” Long said.  He’s always putting the extra time in down low and working out in the weight room.”

“I think that it benefits him way beyond that in terms of interaction with people on his team,” he said. “It’s the experience of a lifetime to compete for a country or for your heritage. Hopefully, he will come back a better player and more worldly individual.”

Greenblatt’s colleague, Cole McCormick, a senior lacrosse player at Division I Cornell University, has also been selected for the Israel Lacrosse team. He said Greenblatt is a teammate that everyone wants to have.

“He doesn’t stop moving,” McCormick said. “He works so hard. He’s really shifty, super fast and is one of those guys that you see going hard no matter what.”

Greenblatt said he is grateful for his Birthright because it gave him the opportunity to learn more about his heritage. Before going to Israel, Greenblatt said, he didn’t pay attention to his heritage, but returned more aware.

“I came back a lot more proud,” he said. “It’s just awesome to be able to put on that jersey with the Star of David on the front and my name on the back. I take a lot more pride in saying, ‘I’m Jewish.’”