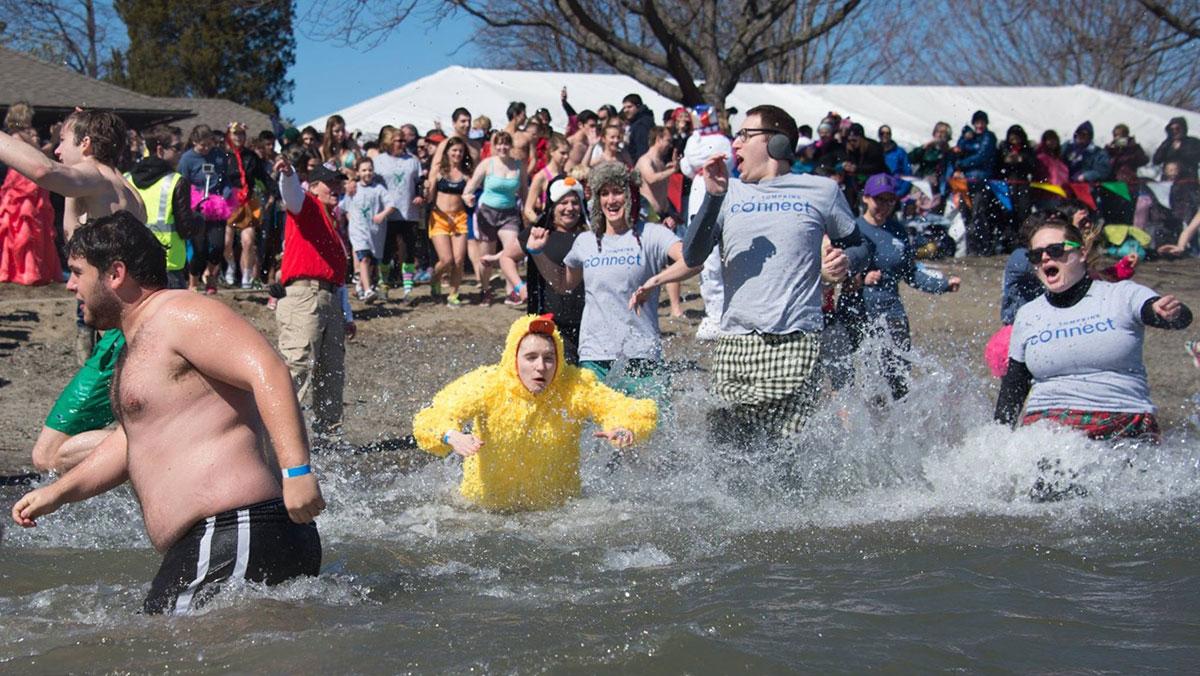 Every year, hundreds of participants from upstate New York gather together to plunge into the freezing-cold Cayuga Lake for a good cause.

This event, called the Polar Plunge, is run by Special Olympics New York to raise money for the organization. Almost 900 people took the plunge March 19 at Taughannock Falls State Park.

Special Olympics gives athletes with disabilities the opportunity to showcase their abilities and compete at regional, national and even the international level. The Student Athlete Advisory Committee at Ithaca College raised $686 for the event with the help of the athletic community.

Contributing Writer Jaysha Patel sat down with junior Scott Halpern, SAAC community service chairman, to talk about the Polar Plunge, the Special Olympics and how SAAC got involved with these events.

Jaysha Patel: What is the Polar Plunge?

Scott Halpern: The Polar Plunge is an opportunity for people to jump into a freezing-cold lake and showcase their commitment to helping out Special Olympic athletes, donate, and to put themselves out there and give recognition to Special Olympics, and specifically New York Special Olympics here at Ithaca College.

JP: Who gets to participate?

SH: Anybody can participate in the Polar Plunge. It’s very open to the public, in SAAC here at Ithaca College … anybody can donate, and anyone can jump into the lake.

JP: What is your position, and why did you want to join this event?

SH: My position in SAAC is the community service chair, so that kind of goes along with running any community service opportunities for our athletes on campus. … I didn’t choose the event, to be honest. Frankly, it kind was just thrown up, and Will Rothermel, associate athletic director for compliance, kind of said, “Hey, the Polar Plunge is going on. Maybe we can get connected as a student body,” and I got in touch with Cassandra [Rucker], who is the director of the Polar Plunge here in Ithaca, New York, and created a team.

JP: What is your favorite part of the Polar Plunge and Special Olympics?

SH: My favorite part is definitely the fact that I can connect with those athletes. We had an athlete come in, and Cassandra, the director, talked to us in a SAAC meeting earlier in the semester and kind of said that every donation goes straight to an athlete and you kind of look back … I had so much given to me as an athlete … so it’s definitely a very relatable experience to be able to do that for them, as they don’t really have the same experience that we do.

JP: How does this event impact Ithaca College and the community?

SH: The Polar Plunge obviously affects Ithaca College because, like I said, there’s a lot of relativeness involved. Obviously, it gets us in relation in working with the outside community rather than our own bubble here at Ithaca College. You know, college is definitely more than going to class and doing whatever you got to do to get the grades, but also about establishing yourself and learning more about yourself, and we’re able to do that through off-campus community service opportunities. How it can relate to the community, you know, like I said before, everybody is involved and especially on the day of the event, there’s going to be people from all over the place, not just from Ithaca, but from all over the county and from all over upstate New York areas, so it’s definitely a way to connect and get involved in the community.

JP: How and when did SAAC get involved?

SH: In January, I was able to contact the director of the Polar Plunge for the Special Olympics this year, Cassandra. Me and her were able to correlate and be in communication back and forth about how we can get involved, what team we can be creating and all that different kind of stuff. Through that, we were able to come together with around $700 of donations through our athletic program and hopefully create a connection that’s not only just for this year’s Polar Plunge, but for Polar Plunges going forward into the future.

JP: How much have you guys raised and how?

SH: $700 were raised. How? So, my plan originally going in was in the SAAC, so there’s kind of members in each athletic team that come together once a month to discuss what we can do in the community … and I basically said to communicate with your team and put the word out and see if we can even get just $1 per athlete, we can get $600 on campus. We were able to do that and also get the faculty involved, even get off-campus restaurants and stores and multiple local stores like that to get involved and donate for our student advisory council.

JP:  Do you have any future plans for this event?

SH: There’s always an opportunity to expand in anything that you’re doing, especially you know for me as a junior, as a community service chair, I definitely see things going a bit differently and maybe becoming more larger as it goes on, especially into next year. I don’t know too much information specifically about how we can get it bigger for the Polar Plunge, but the only thing I can say is we will definitely donate more next year.