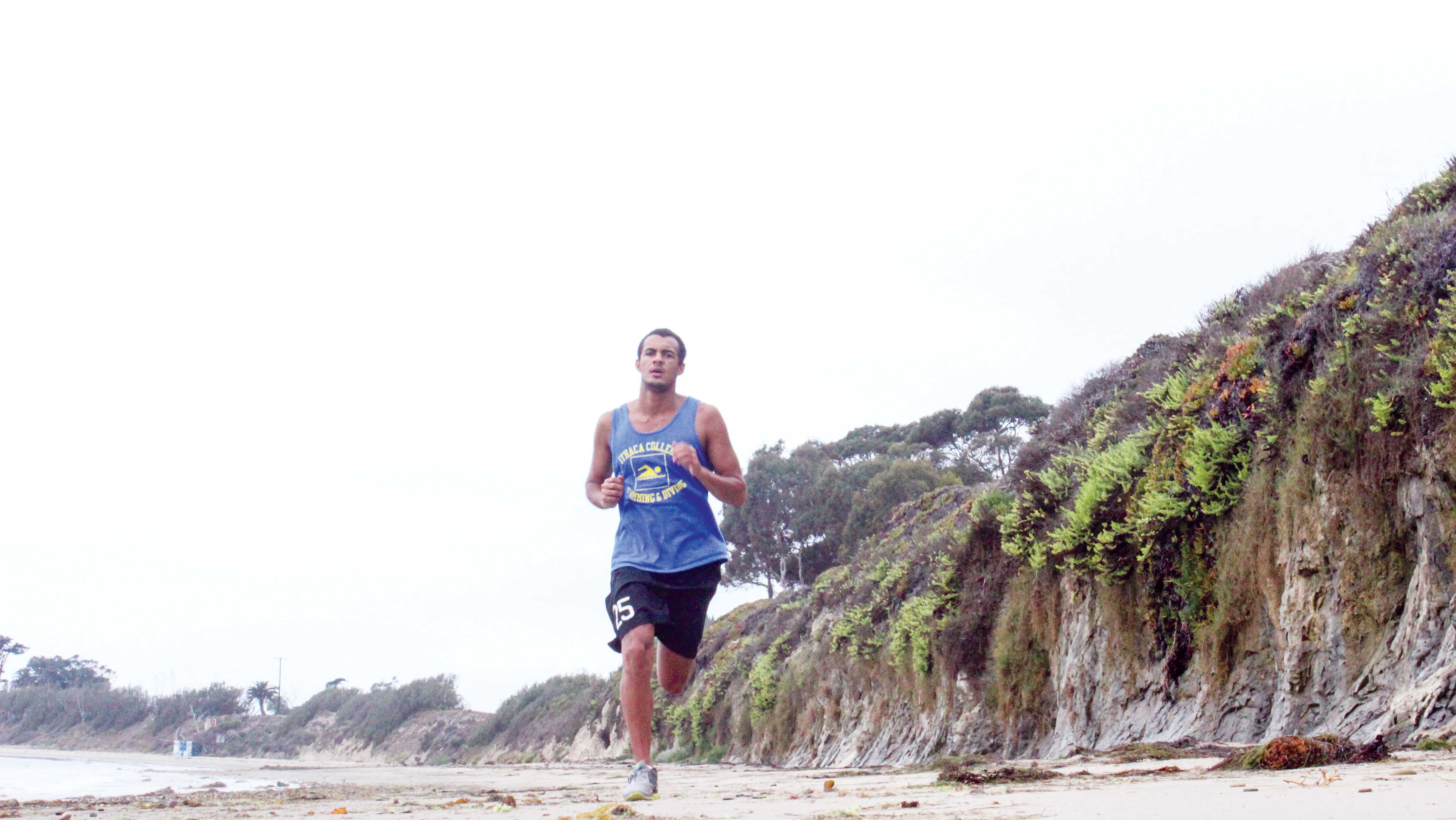 The three months of summer vacation mark a transitional period for Bomber athletes, as they disperse from the Ithaca College campus and venture to various destinations across the globe. However, the summer is anything but restful for the athletes, with coaches or strength trainers often assigning them summer training schedules so they will return to campus in shape for the fall semester. Some athletes, however, stray from these guides to workout in other settings offered by their summer homes. These supplemental workouts help the athletes condition while they’re away from South Hill.

In junior swimmer Vincent Dodero’s hometown of Goleta, California, warm weather often does not reach the beach until early afternoon, even on the hottest days of summer.

Dodero, who utilizes the nearby ocean to train when he is home, arrives at Devereux Beach — a local surf spot — to find a shore devoid of the normal buzz of vacationing families and sunbathing college students who typically line the sand and shallow waters. In fact, the beach is completely empty except for a couple of sandpipers, which flit in and out of the foamy wave break.

Even though it is nearing 10 a.m., the mid-August sun struggles to break through the thick layer of clouds that envelops the coastline. The gray fog matches the color of the ocean, and they merge at the horizon to form a gloomy backdrop.

Dodero is unfazed by the gray monotony. Instead, he is invigorated by the cool weather and energized by the solidarity and peace he finds at the beach.

“I just love being in nature and being able to just let go and enjoy the beauty of it,” he said.

After taking in the scenery, Dodero begins to jog along the dry sand that lines the inland-most part of the beach. The coarse sand provides a more challenging surface for Dodero to train on. He continues his trek, leaving a lone set of footprints in his wake. With each step, his feet sink deeper into the sand, forcing Dodero to exert an extra effort to keep his legs moving.

Though the run may seem irrelevant to Dodero, who spends much of his time swimming both freestyle and butterfly for the men’s swimming and diving team, it conditions his endurance and bolsters muscles that he does not typically use while swimming. Additionally, it supplements his normal offseason regimen for the team.

After a couple of miles, Dodero slows his pace and turns to face the ocean. Exchanging his T-shirt and shorts for a swimsuit, he races into the water for the second phase of his workout.

The frigid water hits Dodero’s body, sharply contrasting the warm sand on the shore. But Dodero is used to the 60–degree water temperature, and his body numbs and eventually adjusts as he plunges headfirst into a breaking wave to begin his 1,500–meter swim. He said swimming in the ocean is different from swimming in the pool because of the rough conditions.

“It’s a lot harder because you have to deal with currents and waves,” Dodero said. “It gives you that competitive edge because you’re in a different environment.”

He emerges from the ocean dripping and saturated with salt water after his swim. Tired as he is, Dodero’s workout is not finished yet. He ends with sets of push-ups and abdominal exercises, which supplement the cardio he has just completed.

After his final round of push-ups, Dodero is done for the day. The shoreline is just beginning to show signs of life as several families have staked their claim on the sand with oversized beach umbrellas. The sun has finally made an appearance, poking through the fog and brightening the beach.

Dodero cools down with a series of stretches on the sand as the beach grows more crowded. Dodero said it’s a workout like this that reminds him why he loves to swim.

“Sometimes being in the pool all of the time can make it difficult to focus, so these beach workouts are great supplemental workouts,” he said. “Not everyone can work out on the beach or in the ocean, so just to be somewhere so beautiful and so close to home is amazing for me.”

On the opposite side of the country, 2,880 miles from Devereux Beach, junior forward Sarah Woychick begins the steep ascent up Castle Rock trail in the Adirondack Mountains. The campsite near Raquette Lake is almost four hours from Woychick’s hometown of Penfield, New York, and serves as a weekend retreat for her and a group of friends.

However, Woychick’s vacation is far from relaxing. Away from the weight room she uses three times a week to train for soccer, Woychick hikes to continue her training. The climb up the mountain is an ideal combination of conditioning and strength training — both of which Woychick needs on the soccer field for the Bombers.

“Climbing up the mountains, the elevation is a big challenge,” she said. “It’s a good mix of weightlifting and running because it is similar to walking up a ton of stairs, so it works all of your muscles as well as your conditioning. You’re constantly using those muscles.”

For Woychick, the climb is as much of a mental workout as it is physical. She said the uncertainty of the trail mirrors a soccer game’s unpredictability.

“It translates to soccer because you never know what to expect in a game or practice,” she said. “You have to deal with the good and the bad.”

Though her calves and quads are burning with the effort of the uphill climb, Woychick begins the descent down the mountain almost immediately after reaching the summit. The second half of the hike, though quicker than the first, provides a different challenge for Woychick’s already tired legs by working her hamstrings.

An hour and a half later, Woychick reaches the bottom of the mountain with her workout complete. Over the summer, Woychick frequently hiked in the Adirondacks and Port Bay, New York, near Lake Ontario. She added these to supplement her thrice-weekly weightlifting sessions and runs.

“We went up the trails pretty fast; it really worked on endurance and got your heart going,” she said. “It was also different from normal conditioning because when we went up the first trail, it took us two hours to get to the top, and it was straight uphill. We just had to get to the top,whereas a workout in the weight room, you’re in and out in an hour.”

The hot Italian sun beats down on sophomore Brendan Davis’ back as he steps out of the apartment that will be his home during his stay in Florence, Italy. It is his first day in the city, and the cross-country runner is embarking on his first run, ready to navigate the unfamiliar streets.

Before beginning his run, Davis sets his watch for 50 minutes. His summer workout schedule consists of running for time rather than mileage, and he wants to follow it as closely as possible.

With his watch set, he begins his run down the narrow streets of Florence. He turns aimlessly, not particularly caring which direction he runs in or where he ends up, instead enjoying the journey.

The streets are much different than those on which he normally runs, far thinner than those in Ithaca. One-way streets are frequent and sometimes unannounced, and Davis occasionally has to avoid oncoming traffic.

Davis is not uncomfortable with the directionless nature of his running. He has spent the past month traveling from country to country in Europe with a friend from his hometown of Cornwall, New York. The scorching sun and the unforgiving humidity, however, are a different story. Over the past few weeks, Davis has become accustomed to the heavy rains of England and Ireland, where he trained before arriving in Italy. Thus, the 90–degree weather combined with the high humidity levels make for uncomfortable running conditions.

After Italy, he is headed to Morocco and then back to Ireland to round out his six-week trip. For now, though, he is focused on completing his run, which eventually takes him north, out of the confines of Florence. The road widens, and the urban setting becomes rural as Davis begins an upward climb.

He reaches Fiesole, Italy, a small township northeast of Florence. The view from Fiesole is breathtaking — the town overlooks Florence, providing a comprehensive view of one of the most architecturally stunning cities in the world. For Davis, this is the reward reaped by training in different places.

Davis’ watch goes off, surprising him. The 50 minutes have passed more quickly than he expected them to.

“With running, it’s important to stay consistent with mileage, so getting lost and going on these runs that were twice as long as I had imagined was a good wayof tricking myself into doing more,” Davis said. “If I had known where I was going, I would have done a lot less running and wouldn’t have gotten as good of training.”

Davis makes his way back down into Florence, still running even though he is well past his 50–minute goal. He progresses back down the mountain, sticking to the streets he recognizes from his trek up. He finally reaches his apartment, tired, but inspired by the new environment. His run has lasted an hour and a half, nearly doubling his original goal.

The trip was the first of its kind for Davis, who spent all of June and half of July abroad. He said his training made the experience even more special.

“I always like using running as a way to see places, but this is the first time I’ve been able to travel like that,” he said. “I was seeing new things and it kept me motivated to keep running. I got to travel and train all at once.”

As the summer comes to an end, the three athletes will continue to prepare for their upcoming seasons. Davis and Woychick will return to their teams this semester; Dodero will be studying abroad in London before returning to swim in the spring. Their supplemental training should give them a competitive edge.