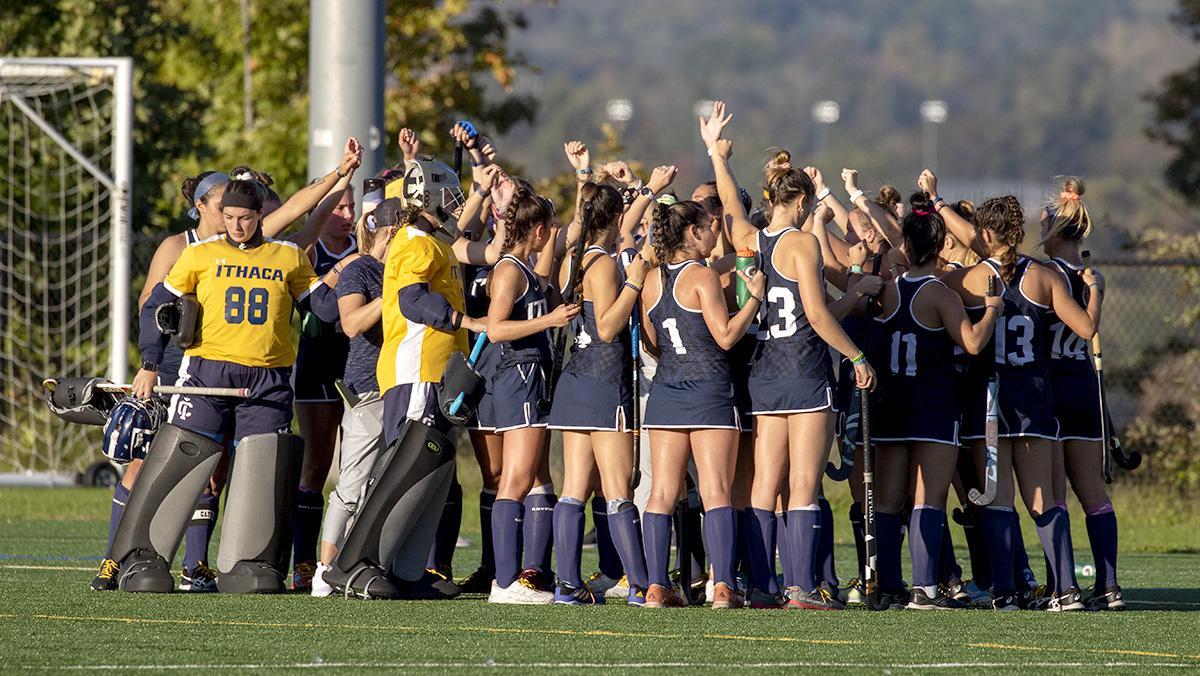 After dominating in-conference play and going on a historic winning streak in the middle of the season, the Ithaca College field hockey team is firing on all cylinders going into the Liberty League postseason.

The Bombers are 5–0 in the Liberty League play with an overall record of 12–3. Midway through the season, the team recorded seven straight wins for the first time since 2000. The team has been able to generate offense well, scoring 27 goals, while the defense has allowed only 11 goals. The Bombers have a forward line that plays a huge role in their offensive success, consisting of seniors Morgan Mullen and Samantha Horowitz and freshman Natalie Descalso. Out of the 27 goals scored, the trio has a combined total of 15 goals.

After the Fall 2020 season was cancelled due to the COVID-19 pandemic, the team was focused on making a strong return to competition. Horowitz said she did not feel anything specific had to be altered coming into the season. She said the team’s ambition to come back for the first time since September 2019 was the biggest motivator to come together and work toward success.

“We all just had to put in the work on our own time,” Horowitz said. “It wasn’t much of falling over from the season before. It was a lot of personal dedication and everyone wanting to do it for the team and not just for themselves.”

Despite the team’s success so far, senior midfielder Jaqueline Mirabile said she feels it is important to continue to take that approach as she understands the team is still a long way away from its ultimate goals: winning the Liberty League and NCAA championship.

“[We] don’t look at rankings,” Mirabile said. “[We] don’t let the opponent get in our head, and we’re just focused on attacking that opponent and then looking for the next.”

Junior striker Elizabeth Pillow said the team knows how important it is to stay confident in tough moments.

“This team is so special,” Pillow said. “Obviously, the Liberty League championship is on our mind, but I think we’re all very focused on the day-to-day and seeing what we can do that day.”

Another factor that has helped the team win games has been its depth. There are 28 players on the roster this year, the most since 2008. Mirabile said everyone has contributed this season in one way or another.

“It’s great because anyone can step up anytime,” Mirabile said. “We’re all super confident in each other and trust one another and ourselves and our coaching staff so that’s definitely crucial for us.”

This year marks the fifth season in charge as head coach for Kaitlyn Wahila. Since taking charge in 2017, her all-time record stands at 44-27. She said she held class year meetings in the preseason and spoke extensively with her upperclassmen about maintaining a tight-knit team culture.

“I think that the confidence right now is coming from our senior class,” Wahila said. “The meeting with the senior class was, ‘The energy you guys bring and the connections you’re gonna make and be able to make with the juniors, sophomores and first years is really going to be super vital to the heartbeat of what we’re going to do and to trusting the process.’ They have done that. They have created really strong relationships with the first years, sophomores and juniors, and that makes a big difference.”

In her first season with the team, Descalso said the juniors and seniors have helped her and the rest of her classmates become integrated into the program.

“The upperclassmen have been great role models for all of the underclassmen to look up to,” Descalso said. “They are perfect examples of what hard work, tenacity and having heart looks like. They are a huge driving force on our team. Their influence goes further than just on the field, as they plan team bonding and make efforts to form connections with everyone.”

Descalso has been one of the many underclassmen to make an instant impact on the team. With the team clinching a spot in the Liberty League Championship with its win against Rensselaer Polytechnic Institute Oct.17, the team has its sights set on more than just a good regular season.

“Even though the season is winding down, I believe we are far from done,” Descalso said. “This is such a special group of girls and coaches that this is unlike any other team. I 100% believe this team can finish first in the league and win the Liberty League championship. To go even further than that, I think we can make it into the NCAA Tournament for a shot at the national championship.”

The Bombers have two more games to play as they will look to finish the season undefeated in the Liberty League before heading into the conference playoffs. They will host St. Lawrence University at 4 p.m. Oct. 22 and will hit the road one last time to face Skidmore College at 3 p.m. Oct. 24 in Saratoga Springs, New York.