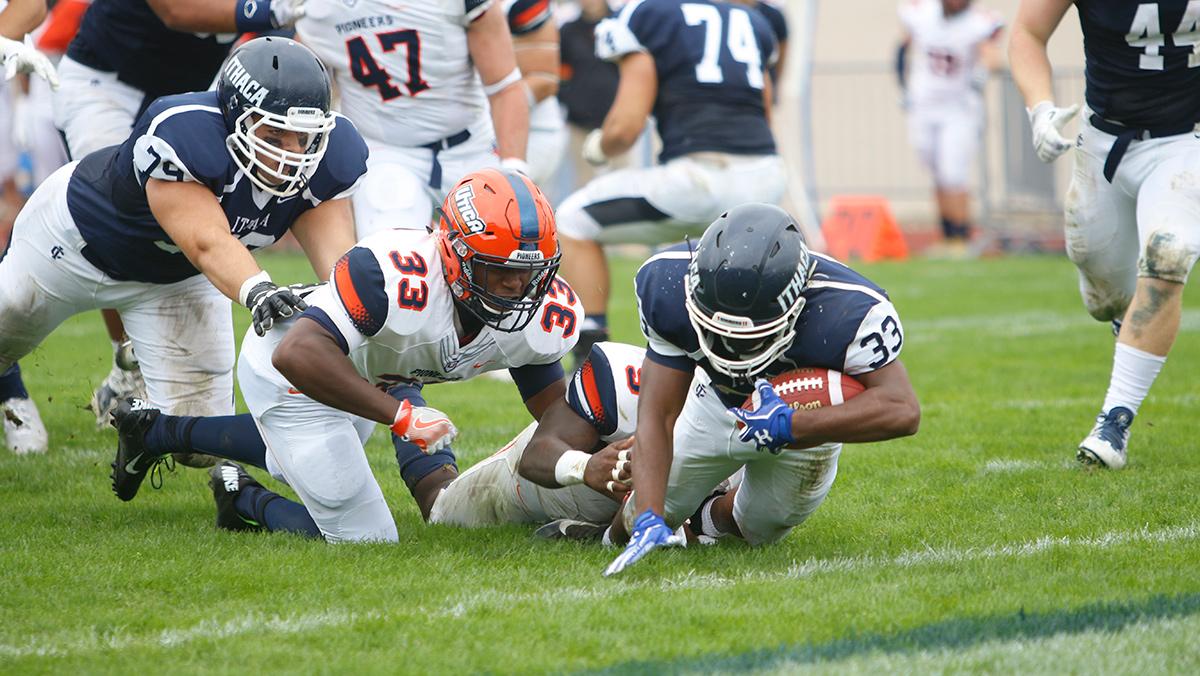 Both teams punters were put to work early, as no points were put up in the first quarter. In the lone drive of the quarter that did not end in a punt, the Bombers senior quarterback Wolfgang Shafer connected on a 30-yard pass with senior wide receiver Myles Lafrance, who fumbled on the Utica five yard line, relinquishing possession for the Bombers.

Scoring remained difficult in the second quarter, as the Bombers continued to shutout the Pioneers. The South Hill squad did manage to put three points on the board when freshman kicker David Prudhomme drilled his first career field goal attempt from 23 yards out, to give the Bombers the lead. Utica tried to tie the score at the end of the quarter, but freshman kicker Desmond Akpanoko missed a field goal.

The offenses found life in the third quarter, as both teams scored on their opening drives. Utica senior quarterback Teddy VanGalen put the Pioneers on the board when he found senior wide receiver Jerred Beniquez for a 34-yard touchdown to give them a 7–3 lead.

The Bombers answered back two plays later, after a 39-yard kick return by junior Jordan Schemm. Shafer found junior wide receiver J.R. Zazzara for 38-yard gain, which was followed by an eight yard touchdown run by junior running back Tristan Brown. Prudhomme missed the extra point, so the Bombers lead 9–7.

After forcing a Utica punt on the next drive, the Blue and Gold drove up the field and extended its lead to 16–7 when, from four yards out, Brown punched in his second rushing touchdown of the day.

Brown said his success was due to the offensive line’s ability to make holes for him to run through.

“The O-line did a great job today,” Brown said. “My job is easy, all I have to do is run the ball, they do all the hard work and gave me room to do what I needed to do.”

In their first drive of the fourth quarter, the Pioneers completed a 50-yard drive with a one yard touchdown run from freshman running back Lindell Reed, making the score 16–14.

On the next drive, the Bombers answered back with a four yard touchdown pass from Shafer to Zazzara to make the score 23–14 to secure the win.

The Bombers gained more yards rushing in this game, with 119 yards. than they were able to in their previous three games combined, in which they only rushed for a total of 106 yards.

Ithaca head coach Mike Welch said the offense played the way it was supposed to for the first time this season.

“We played up to our capabilities today,” Welch said. “We ran the ball really well, which allowed the play-action pass, and when all of that works you’re gonna score some points.”

Shafer completed 13 of 19 passes for 251 yards, one touchdown and one interception. He said the work he and the rest of the team put in at practice during the week paid off.

“We had a great week of practice and all week we’ve been saying we are able to play a complete football game on Saturday and we came out and did just that,” Shafer said.

Utica head coach Blaise Faggiano ’93 said his team made a lot of mistakes that cost them the game.

“Today was one of those days you can’t have, we had too many penalties, gave them great field position and allowed too many long passes and you can’t win football games like that,” Faggiano said.

The Bombers’ next game will be at 1 p.m. Oct. 8 when they host Hartwick College at Butterfield Stadium.