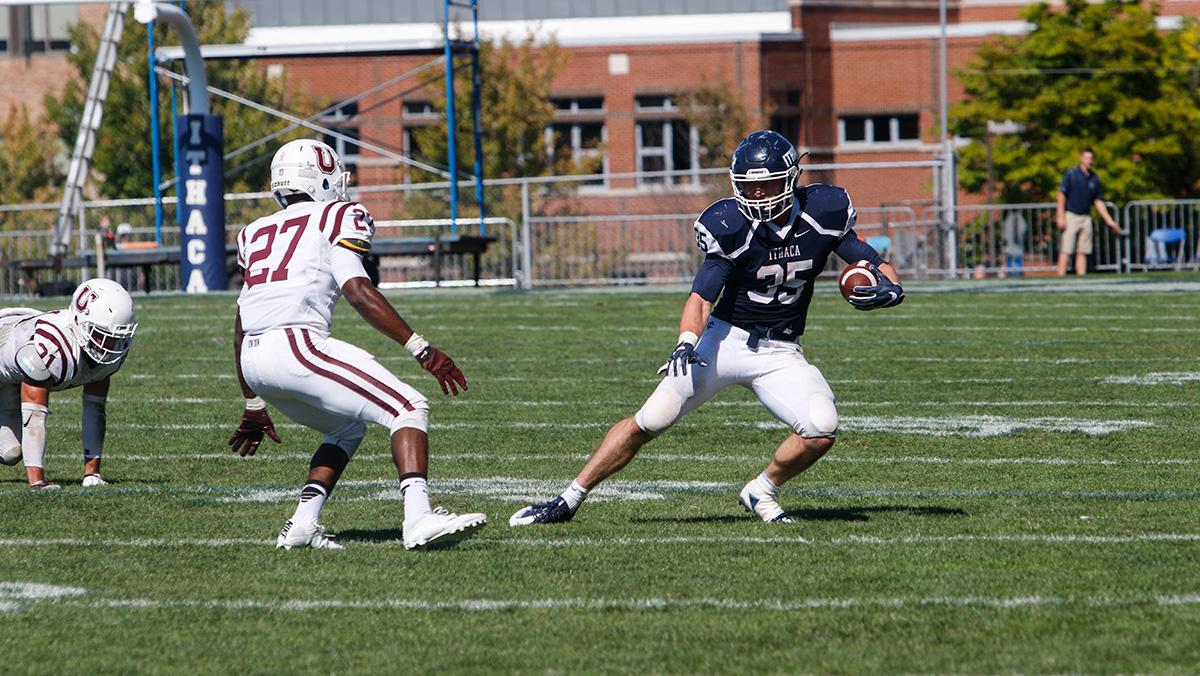 The Ithaca College football team brought home a victory in its first game of the season Sept. 3, defeating Union College at Butterfield Stadium by a score of 14–9. The Bombers have now won 19 consecutive season openers.

Defense was at a premium in the first half as both teams combined for seven first downs and each team punted six times. Junior cornerback Jordan Schemm said the defense’s resilience allowed them to be successful in this game.

“I thought we played together and showed a lot of discipline,” Schemm said. “We communicated really well and were able bounce back whenever they made a big play.”

The first quarter started with both teams punting on each of their first two possessions. The scoring drought ended on the Bombers’ third possession, when senior quarterback Wolfgang Shafer, who was a game-time decision to play due to a sprained thumb, connected with sophomore wide receiver JR Zazzara on a 40-yard pass that put them on Union’s 2-yard line.

The second quarter featured no scoring and stout defense. The South Hill squad started to put a drive together when Shafer hit junior running back Evan Skea with a shovel pass for a 37-yard gain into Union territory. Two plays later, Shafer’s pass was intercepted by Union senior safety Brian Alebiosu, ending the Bombers’ drive. Every remaining drive in the quarter ended in a punt, until Union tried to convert on fourth down and failed.

After consecutive punts to start the third quarter, the Dutchmen scored their first points of the season when junior kicker Zach Pyser nailed his first field goal attempt of the season to make the score 7–3 in favor of the Bombers.

On the ensuing possession, the Blue and Gold seemed poised to answer back when Schemm returned the Union kickoff at 53 yards, giving the Bombers the ball on the Union 41-yard line. After marching up to Union 18-yard line, Shafer threw his second interception of the day to senior cornerback Justin Waller of Union.

Union was in the midst of a drive at the start of the fourth quarter, and on the first play of the quarter, sophomore linebacker Pat Minogue forced Union senior running back Jermaine Carn to fumble, which was recovered by Schemm and returned it 54 yards for a touchdown. The Dutchmen responded with a 1-yard touchdown from Carn on the next possession and then opted to attempt an unsuccessful two-point conversion, making the score 14–9 in favor of the Bombers.

The Bombers struggled on offense in this game, as Shafer completed only 10 of 23 passes for 124 yards, one touchdown and two interceptions. The running game also faced some challenges as Brown led the team with a mere 35 yards on 12 attempts.

Mike Welch, Ithaca College head football coach, said the offense needs to improve in every facet if the team wants to be successful this season.

“We didn’t have much offense today,” Welch said. “I wish would have taken care of the ball more. All of these problems are fixable and with the bye week coming up, we’ll have plenty of time to work on them before our next game.”

Shafer said his injury did not impact impact him today; it was the talented defense across from him.

The Bombers’ next game will be at 7 p.m. Sept. 17, when they travel to Geneva, New York, to take on Hobart College.