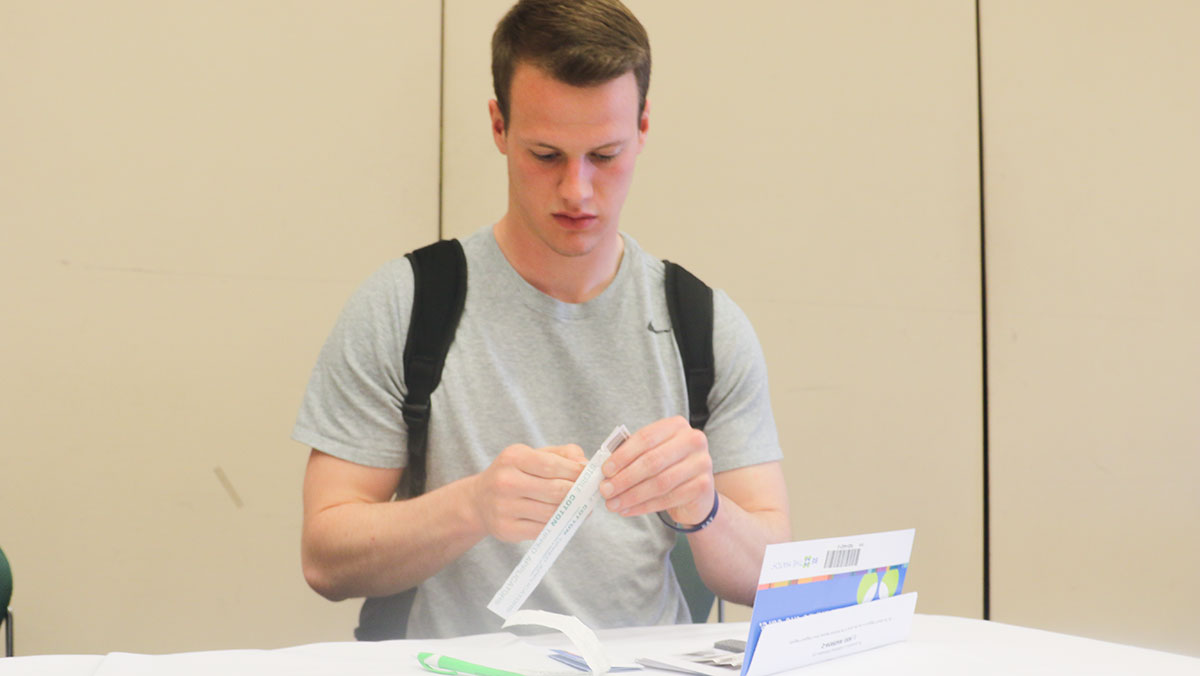 The Ithaca College football team hosted the program’s sixth annual bone-marrow drive to find bone-marrow matches and save the lives of those who suffer from forms of blood cancer.

Members of the coaching staff as well as players partnered with the National Bone Marrow Donor Program’s “Be the Match” initiative March 31 to host the drive in Emerson Suites in the Campus Center.

Aspiring donors first filled out a short health questionnaire and then took a sample of their cheek cells with cotton swabs to decipher their tissue type.

Head coach Mike Welch said the team’s goal is to recruit between 100 to 200 volunteers per year.

“It’s fantastic. It’s just an indication of the kinds of students we have here at Ithaca,” Welch said.

Welch said the Bombers began to hold their own bone-marrow donor registry drive after Villanova University football head coach Andy Talley reached out to him about recruiting other colleges and universities.

Welch said there is a lengthy list of roughly 70 to 80 colleges from all divisional levels of football, ranking from the Division I program at Pennsylvania State University to the Blue and Gold’s bitter adversary SUNY Cortland, that are affiliated with the program.

Michael Garbin, senior community engagement representative of “Be The Match,” has assisted in the coordination of the South Hill squad’s drive since its inception. He has also aided in organizing bone-marrow donor registry drives at other colleges.

Garbin said out of all of the college drives he has helped operate, no other college compares to Ithaca College’s organization and motivation.

“The passion that I see the players evoke — they don’t see this as a job. They really see this as an experience,” Garbin said. “They are trying to help save people’s lives.”

Garbin said he was flabbergasted by the number of volunteers the college has been able to accumulate at these drives every year.

“Usually, the average gross number is about one in 550 who want to donate,” he said. “It’s exemplary. Honestly, I wish every college was as good as Ithaca.”

Three out of these five were members of the football team. Joe Gilfedder ’12, Adam Bienstock ’13 and Stephen Pulver’s ’14 successful matches led to the life-saving transplants of three separate parties.

The remaining two donors were not members of the team. One of those donors, David Mizelle ’12, chose to register to donate his bone marrow during the Spring 2012 semester at the college after a football player in his class encouraged everyone to come out and volunteer.

Mizelle said he did not have a specific reason as to why he chose to attend the drive other than the fact that he had time that day to do so.

His decision would ultimately pay off two years later when the National Bone Marrow Donor Program contacted him notifying him of a potential match with a then–9-year-old boy named Caleb. Further blood testing confirmed the match.

“Honestly, when I signed up, I just kind of assumed that nothing would ever really come out of it,” Mizelle said. “I knew it was kind of like a shot-in-the-dark type of thing, and so when I got the call, I was surprised. … After the initial feeling of disbelief wore off, I was actually kind of happy just because I knew that I would become someone that would actually donate.”

That summer, Mizelle went through the transplant procedure, and the following summer, he met Caleb and his family for the first time.

With all of the success the drive has assembled over the years, Welch said he advises anyone who may be on the fence about donating bone marrow not to shy away.

“It’s a personal decision. It does involve some inconvenience,” Welch said. “The way I look at it personally is, my bone marrow is going to match just a few people in the world, and if it happens to be someone who needs me to save their life, that small inconvenience of a few hours over a course of two or three weeks, it’s minuscule.”