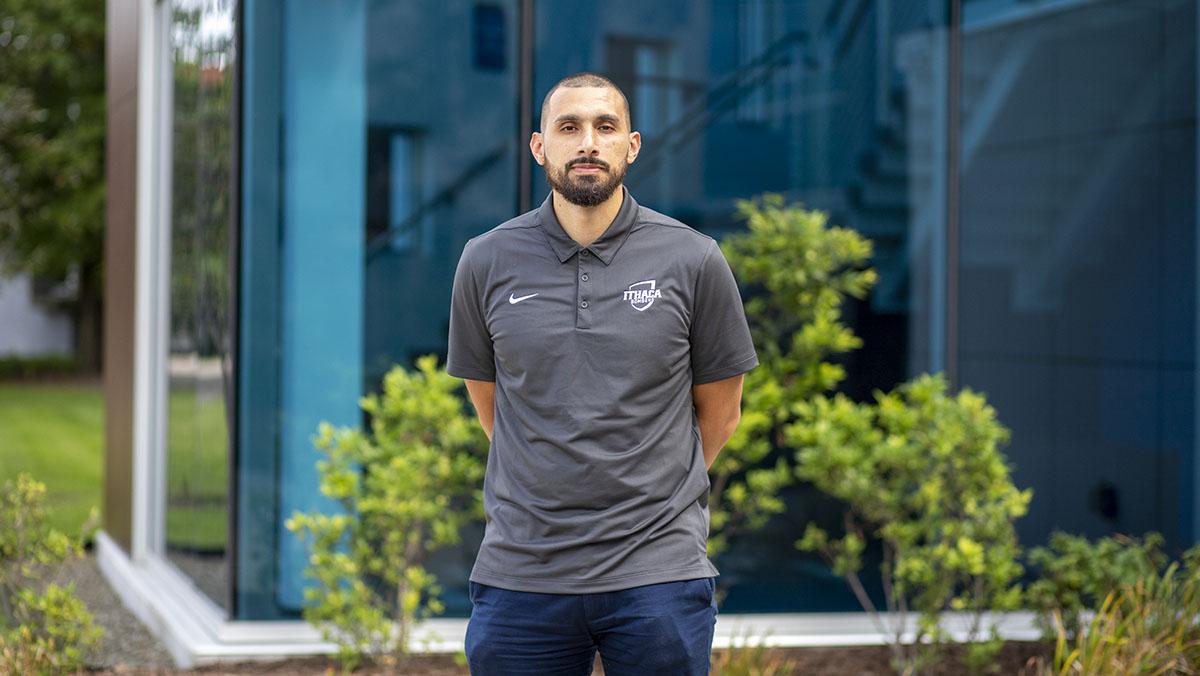 Eleanor Kay/The Ithacan
On May 24, Waleed Farid was announced the next head coach of the Ithaca College men's basketball team. Farid has coached at Hartwick College and Stevens Institute of Technology.
By Tommy Mumau — Assistant sports editor
Published: September 22, 2021

As the academic year is underway, new Ithaca College men’s basketball coach, Waleed Farid, has arrived on campus and is becoming acquainted with his team. The coach said he is already enjoying his time on campus and he is eager to begin practice later this fall.

“I’m excited to get started working with the guys,” Farid said. “The support from everyone around here on campus, off campus has been phenomenal. Our alums have been great. We’re looking forward to kind of getting back on the court.”

The men’s basketball team has had three head coaches over the past three years. After former head coaches Jim Mullins and Sean Burton retired in April 2020 and resigned in May 2021 respectively, the college announced May 24 that it hired Farid to lead the program moving forward. Farid is now the Bombers’ 10th head coach in program history, replacing Burton, who had a short stint at the helm. The new coach has crafted an impressive resume throughout his time on the sidelines, leading Hartwick College to 49 victories in his first four seasons as its head coach and helping Stevens Institute of Technology post a 127–67 record in his seven years as an assistant coach. Farid also graduated from Stevens, where he dominated on the court as the program’s all-time points leader.

Farid said he was attracted to the college because of its reputation of excellence both on the court and in the classroom.

“It’s a program that’s had a lot of success,” Farid said. “But then when you think about the school, the academics, the programs it offers, the size, I think they do really well academically. When you think about the number of students we have here, but still being able to offer so many benefits of a small school experience academically … Obviously, it’s one of the top liberal arts colleges in the Northeast.”

The college was recently ranked the 10th best university of its kind in the North by the U.S. News & World Report.

Farid has made it clear that he prioritizes education, and will look to help his players manage their responsibilities in school and with the team. The team has had recent success in the classroom, having 10 players named to the 2020–21 Liberty League Winter All-Academic team.

“We talk to our guys about academics just as much as we do about basketball,” Farid said. “We have an understanding that they’re students first, so they’ve got to take care of business there. Basketball is a privilege, you have to earn that right to play. So, take care of business in the classroom, you get to play on the court.”

Farid has had success with this goal in the past, helping Hartwick’s squad earn the NABC Team Academic Excellence Award during the 2019–20 season, according to his profile on Ithaca College’s athletics website.

Junior captain Liam Spellman said he has been inspired by the coach’s emphasis on development off the court in their initial meetings.

“He wants to make sure that we’re students first,” Spellman said. “A lot of coaches say that, but he actually really cares that we do well in school and just become a better person, outside of just being an athlete. In the team meeting we had, he wanted us to be better people and students. So, I think with his mindset and where he wants to take our program, I am really looking forward to it.”

Senior captain Zach Warech said he has been impressed by Farid’s approach in their initial meetings, especially as the team is going through a significant shift in leadership.

“This time it’s a little bit of a bigger transition, but it’s nice,” Warech said. “We have more stability, everything’s more clear cut. Waleed’s done a good job of communicating with us and I’m really looking forward to having him through the next year or two [of my career].”

Farid said he tries to get to know his players off the court to help them reach their goals beyond college. He said his ultimate objective is to prepare his players to reach their aspirations in their post-academic careers.

“I’m really proud of all the guys I’ve been able to build relationships with and connections that lasted past the four years that they spent with me at college,” Farid said. “There’s no prouder moment than getting to watch somebody you recruited as a high school senior come through four years and then graduate with a great job.”

The team is still becoming acquainted with its new coach, as the squad’s first practice of the season is scheduled for Oct. 15. Warech said he has enjoyed learning about the ideas that Farid has in store for the upcoming campaign.

“I’ve had a few basketball conversations with him that I really like,” Warech said. “I agree with pretty much everything that he’s talked about and [I’m] excited for him to implement it to all of us and see where it takes us.”

Farid said he is eager to begin preparation for the team’s upcoming season and looks forward to developing the program in the years to come.

“I don’t see why this program can’t be a national contender,” Farid said. “I’m going to push and try to get us to the highest level we can get to. And I think that we’re gonna strive to be the best in everything we do, on and off the court.”