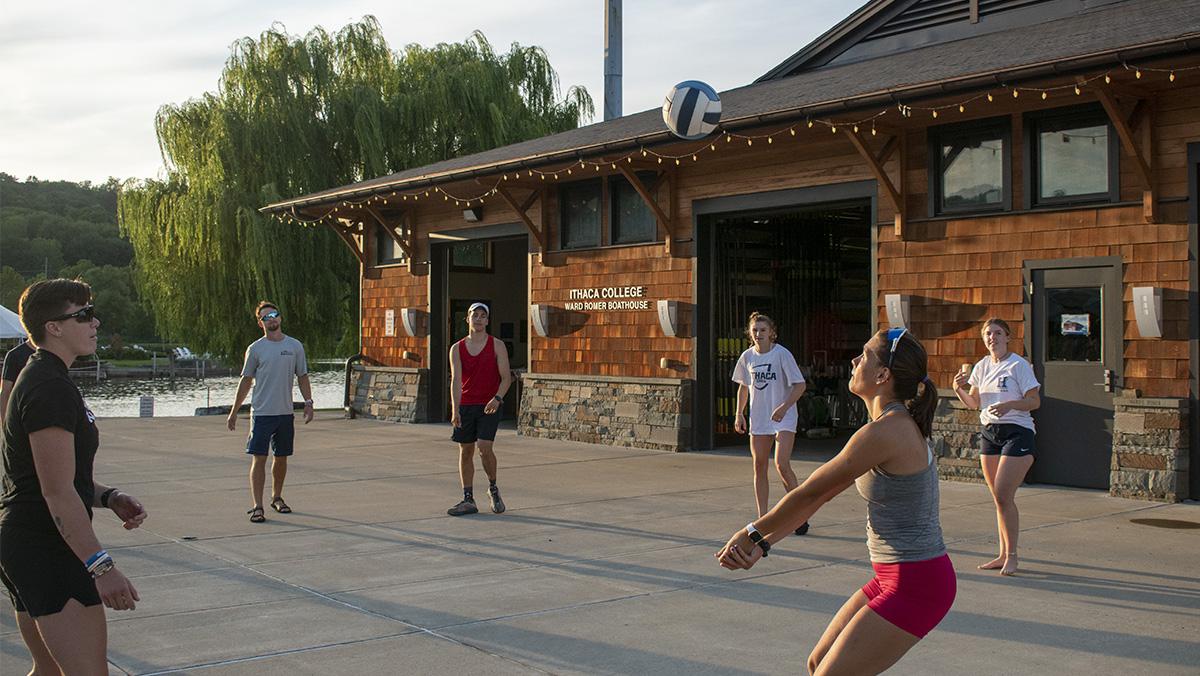 Nolan Saunders/The Ithacan
Members of the Ithaca College men’s and women’s rowing teams playing volleyball outside the Ward Romer Boathouse on the Cayuga Inlet on Aug. 18, where the members met weekly for cookouts.
By Aidan Charde — Sports Editor
Published: August 24, 2022

Every Thursday night over the summer, former Ithaca College men’s crew coach Dan Robinson ’79 could be found standing at a small, handmade charcoal grill by the Cayuga Inlet.

This is the setting for the Ithaca College men’s and women’s crew team cookouts. Robinson, who announced his retirement from the team in March, and his wife, Becky Robinson ’88, head coach of the women’s crew and sculling teams, have been hosting the events for more than 30 years.

Senior Gregg Seiz described Dan Robinson as “The Grillmaster,” still helping run the event even though he is no longer with the team.

“It was good to see Dan,” Seiz said. “He loves the job a lot. It’s good to see him doing well. I think part of it is the retirement, part of it’s just, like, the atmosphere of the barbeque.”

While Seiz said the attendees are usually just members of the teams, Robinson said the event is open to almost anyone, as long as they are a part of the campus or rowing community.

“Every once in a while, we have some alums up in Syracuse [who] will show up,” Robinson said. “The rowing community [in the City of Ithaca] is invited, the college community is invited, and they can bring friends. All these times, it’s an open invitation.”

Since starting his position July 12, Justin Stangel, the new men’s crew coach, has made it to some of the dinners. His first time there was August 11, but he said he does not think it will be his last.

“I thought it was a great event,” Stangel said. “Having that opportunity to connect with current students and alumni of the program, I think, is a really unique and special experience at Ithaca College.”

Not everyone on the teams knew just how long the Robinsons have been hosting the cookouts — sixth-year Allison Arndt said she was surprised to hear that it has been over 30 years. And even though she is entering her sixth year at the college, 2022 was the first time she was able to make it to the dinners.

“I’d heard about them and people were always talking about them,” Arndt said. “But I was like, ‘I’m not here in the summer, I’m only here for the school year.’ … But it’s a great time to see everyone who’s in town because when you’re in Ithaca for the summer it’s very different than being here during the school year.”

Bobby MacInnis ’22, who was on the team for three years, said this summer is the first time he has been to one of the team cookouts because he has not been in the area in past summers, but he hopes to get to a few more before the summer ends.

“I’m here all summer doing a class,” MacInnis said. “So, I don’t know, I can come hang and see some people. You never know who’s gonna be at these things. … I love this weather, it’s relaxing. And it’s better than just eating in my house, in my kitchen.”

Zoe Foster ’22, a former coxswain for the men’s team, also had not been to any of the summer cookouts before this year, mostly because it was hard for them to stay in Ithaca for the summer. They said older students and recent graduates tend to make up most of the crowd, but underclassmen know they are invited too.

“This is my first summer [in Ithaca], and I’ve been looking forward to this since I was a freshman,” Foster said. “We don’t really advertise it very much, but it’s just like, ‘if you’re in the area and you want to hang out and get free food on a Thursday, then just come down and hang.’ It’s super casual.”

Located right by Cayuga Lake, the Ward Romer Boathouse has a concrete patio outside with picnic tables just beside the water. Stangel said there were some rowers from the college working out on their own when he was there, coming in to talk to the other attendees after spending time out on the water.

Robinson said the casual nature of it is what makes it so much fun. He said he spends around $15 a week on burgers and sausages, and whoever else comes is invited to bring a side dish or drink, but there is no pressure to contribute — just to come and have fun.

“We always got stuff, and if we run out, we run out, so it goes,” Robinson said. “It’s totally informal. … And if it’s raining, we got this big umbrella [for the grill] and we move the picnic tables [inside the boathouse]. We’ve done it rain and shine.”

Seiz noted, though, that there is an unwritten rule about replenishing. Robinson might be OK with running out of food, but Seiz said it should not happen.

“You’ve got to replenish,” Seiz said. “It shouldn’t be the case [that we run out of food] … and if you bring food, you’re rowing royalty. It doesn’t matter how fast you are.”

This story was originally published June 27, 2022. This version has been updated and expanded.