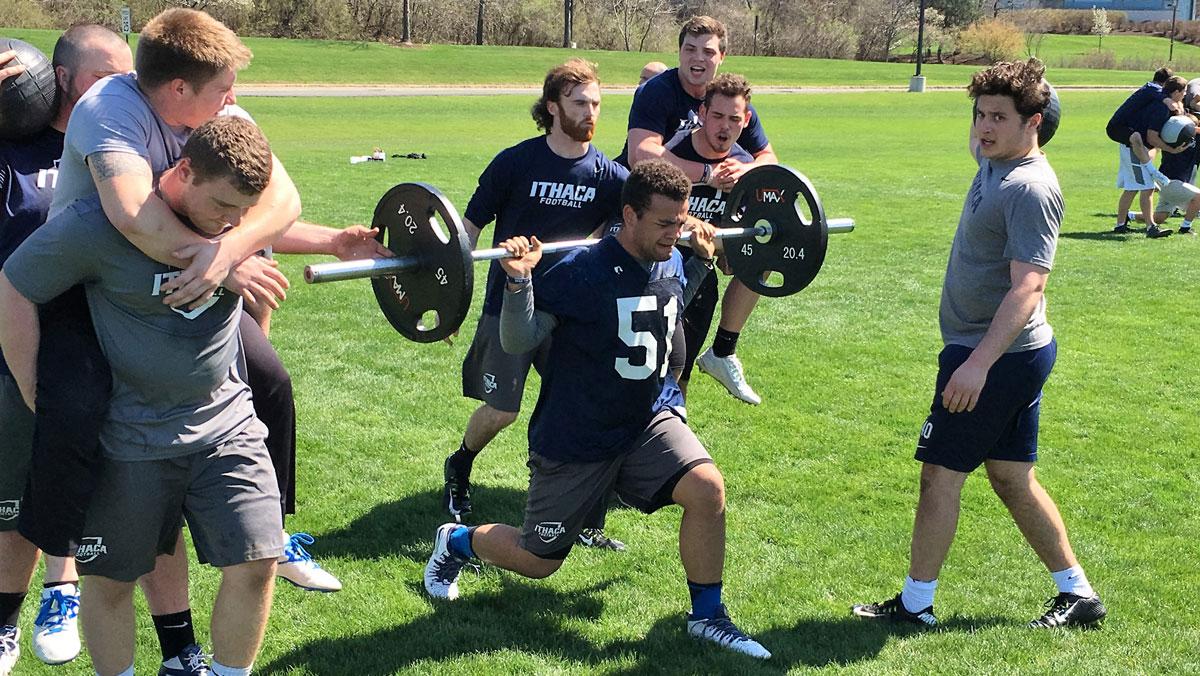 PHOTO COURTESY OF ANTHONY*
Sophomore Marc Barbieri lunges while carrying a barbell with two 45-pound weights across the field. His brother Rob Barbieri is a senior on the football team and a captain.
By Matt Hornick — Staff Writer
Published: August 31, 2016

Bear crawl 50 yards, flip the tire 25 yards, carry the tire overhead 25 more yards. These are three pieces of a relay that four Ithaca College athletic teams did when working with Applied Performance Sciences.

Developed by Navy SEALs in conjunction with both professional sport and Olympic coaches, such as John Underwood, who trained more than two dozen Olympians, the overall goal of Applied Performance Sciences is to maximize human performance. The program — which the college adopted this year to help the football, wrestling, men’s lacrosse and men’s basketball teams improve their game — employs a combination of physical, military–style training; communication drills; and lifestyle lessons.

The program is split into two parts: physical training to enhance teamwork and mental fortitude, and classroom sessions to reaffirm what was learned during the physical training and teach about lifestyle changes that allow a person to perform at their peak.

The idea to implement the program came in the summer of 2015 when many of the college’s coaches, including head football coach Mike Welch, went to the Olympic training facility in Lake Placid, New York, and met with members of the Applied Performance Sciences team. He said that once he was introduced to the program, he knew it would benefit his team.

“We all really liked the message and the things they were saying as they related to building teams and athletic performance, and we’re all about getting better, so we brought them in,” Welch said. 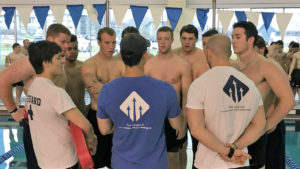 “We have a number of different sectors that we work in with the goal of maximizing human performance, whether that is with student–athletes, students trying to improve how well he or she can retain information, corporate groups, and first responders such as fire departments,

With these goals in mind, Anthony and some of his colleagues at Applied Performance Sciences visited the college twice to work with the college’s football, men’s basketball, wrestling and men’s lacrosse teams.

Much of the physical training was done in the form of relay races in which the teams were separated into smaller groups called “crews,” which were predetermined by the coaches. Each crew chose a leader, and the leaders were then given a detailed description of the relay, which they had to communicate back to their crew. The winner was not determined by who finished the relay the fastest, but by who followed the directions the closest. Anthony said the main focus is on precision and communication more than anything else.

“If every crew did an exercise wrong except for one team and that team finished last, the team that finished last would win because they did the exercise exactly how we told them to,” Anthony said. “We want them to do it as quickly as possible, but we care more about the quality and attention to detail.”

When the student–athletes were told they would be participating in the program, they were very receptive. Rob Barbieri, senior defensive lineman for the football team, said he found the training particularly interesting because he comes from a military background. 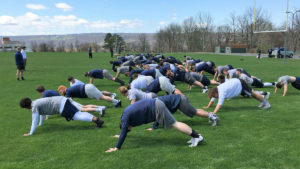 The football team holds a plank during one of its wokrouts. Ithaca College got the idea to implement the program after head football coach Mike Welch met the organizers in 2015. PHOTO COURTESY OF ANTHONY*

“My father is in the Marine Corps, so I have a deep admiration for any of the armed services, and to know we were working with Navy SEALs, who are the best of the best, we were very excited,” Barbieri said.

Marc Chasin, junior guard for the men’s basketball team, said he was very open to the idea of the training.

“Our goal is to win, so we were willing to do what it took to gain some ground on our competition any way we can,” Chasin said.

Two of the program’s main messages are teamwork and communication, which made a strong impact on the college’s wrestling team. Senior wrestler Jimmy Kaishian said it helped the team off the wrestling mat.

“It takes a team to win, which requires leaders to push everyone to places they wouldn’t have gotten to on their own. The SEALs made people who wouldn’t have otherwise stepped up, step up,” Kaishian said.

Anthony said the program’s focus is not on the physical aspects of athletic excellence but rather on the mental and teamwork aspects.

“Our job was not to make the teams bigger, faster or stronger,” Anthony said. “We use the physical training as more of a way to work on communication, leadership and attention to detail.”

After the workouts, the teams went into classrooms with their coaches, and the SEALs would break down everyone’s performance during the events. Anthony said while recognizing success is important, the focus of these sessions was intended to improve upon mistakes. 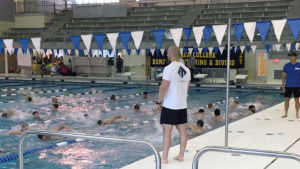 The football team was taken to the pool in the Athletic and Events Center for a drill. PHOTO COURTESY OF ANTHONY*

“During the debriefs, we would acknowledge those who did well, but for us, it is much more important to address those who didn’t do well and make sure we put them in a position to improve in whatever ways they struggled,” Anthony said.

Senior quarterback Wolfgang Shafer said he found this part the most important of everything they did in the program.

“My favorite part was we got to go in and get on the blackboard and talk about leadership and how we can have a team full of leaders instead of just a handful of leaders on the team,” Shafer said.

The Applied Performance Sciences team impacted each team differently, but all had positive takeaways. Jake Cotton, junior attackman for the college’s men’s lacrosse team, said his team saw an increased feeling of togetherness due to the program last season.

“It brought us closer together both on and off the field,” Cotton said. “The guys were really cool and gave our team really good lessons to go by.”

While Anthony works with many clients who want to improve their performance, he always makes sure to check in on how his prior clients are doing since previous visits.

“We like to check up on all our clients, especially our student–athletes, not only to see how they are doing after we worked with them, but also as a way to gather information for if we ever come back to work with them,” Anthony said.