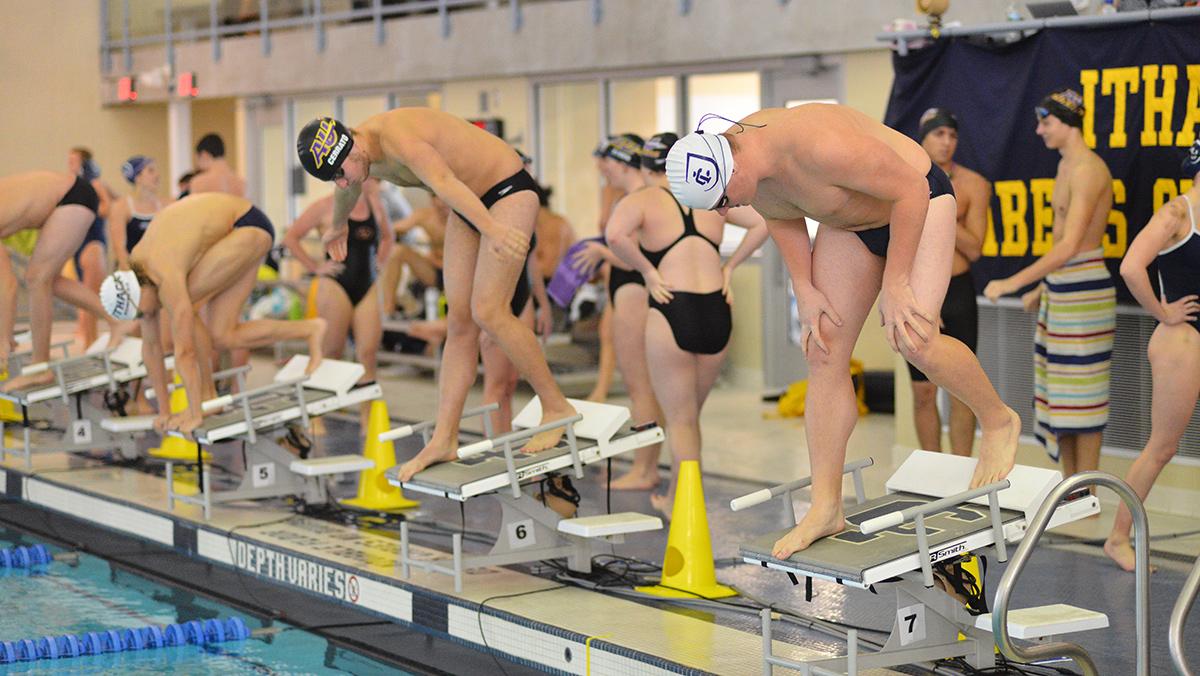 FERNANDO FERRAZ/THE ITHACAN
Swimmers get ready to start a race Jan. 21 agaisnt Alfred University in the Athletics and Events Center. The men’s and women’s swimming teams are currently in taper in preparation for their championship meet Feb. 15–18.
By Zoë Freer-Hessler — Contributing Writer
Published: February 13, 2017

Competitive swimmers are used to practicing for two hours a day, six days a week. As the season comes to a close, taper begins and the practices get shorter and less intense.

Tapering is the reduction in the volume of practices, and tapers generally begin a week or two before the important competitions of the season. Tapering is significant because it allows athletes to fine-tune their skills and give their bodies a chance to relax.

Senior Brenna Dowd said the end of a season and final competitions are the most exciting part of the year, so it’s essential to be prepared. Both teams are competing in the Ithaca Invitational on Feb. 11 and the Empire 8 Championships Feb. 15–18.

“I think it’s important because it’s kind of like your last rest before your biggest meet,” Dowd said. “We start a taper — basically, we work doubles plus lifting for like three to four weeks over winter break, and then, once classes start, there’s just not enough time in the day to do that, so you just naturally start to lessen the amount of yardage.”

Research shows that swimmers generally decrease their practice volume by 40 to 60 percent during a taper. These reductions strictly regard the volume of work during workouts. The research indicates that intensity needs to stay high but frequency can be reduced by up to 20 percent. High-intensity tapers can result in higher levels of red blood cells and hemoglobin in the blood — indicators of an increase in oxygen delivery, muscle fuel stores and muscle mitochondrial activity, which generally results in greater storage of energy.

“The team generally loves taper,” junior Aidan Hartswick said. “After doing lots of yardage and doubles for a couple weeks, having that decrease in yardage and increased focus on sprinting and rest is really nice. Most people end up feeling really fast in the water during taper and generally just have more overall energy and excitement with championships right around the corner.”

Kevin Markwardt, head coach of the men’s swimming and diving team, said that at the end of the year, everyone expects to have their best time, and a successful taper is a key part of achieving this.

“Generally, it’s just a reduction in the work volume,” Markwardt said. “You’re doing a little more speed work, your strength routine is changing to a little bit more power, so it’s tapering down, but it’s also more on a one repetition–maximum type thing.”

Markwardt said tapers are typically between two and four weeks long, depending on the length of the season and whether or not there has been an offseason.

“Our college season is usually the same length, so our taper is generally four weeks,” he said.

The most important part of tapering is making sure the swimmers are getting enough sleep. Markwardt said that since training decreases in volume, athletes have more energy and tend to grow restless. During the beginning and middle of a training season, Markwardt said, coaches also have to remind swimmers about the need for as much rest as possible.

“The thing you have to manage with them is to conserve their energy,” he said. “They feel really good, so we talk to them about basic things about not walking around anymore than you have to. You have a lot of energy, but you want to conserve that energy.”

Swimmers are generally good with their time management, Markwardt said, so it is especially important during taper for them to stay on top of their work.

Nutrition, sleep, hydration and recovery are all important pieces of the puzzle that is a successful taper.

“You can be in great shape and be dehydrated and not able to perform well,” he said. “The things we stress the most are maintaining good hydration during that period and eating healthy.”

During a taper, swimmers try to avoid changing very much in their daily lives. Athletes try to keep their routines as close to the same as possible because drastic changes in any type of routine can hurt their whole season’s training process.

“Swimmers eat a lot — we go from being told to overeat to having to restrict a little bit and you have to keep reminding yourself that you don’t have to constantly keep eating,” Dowd said.

Competing well and racing fast are as much mental things as they are physical things. To achieve their best times, Hartswick said, swimmers need to be able to maintain a healthy mindset and a good training ritual.

“The only time taper isn’t fun is when it doesn’t pay off for you at championships,” he said. “Besides that, the decreased volume of training, more rest, and better team morale is great.”