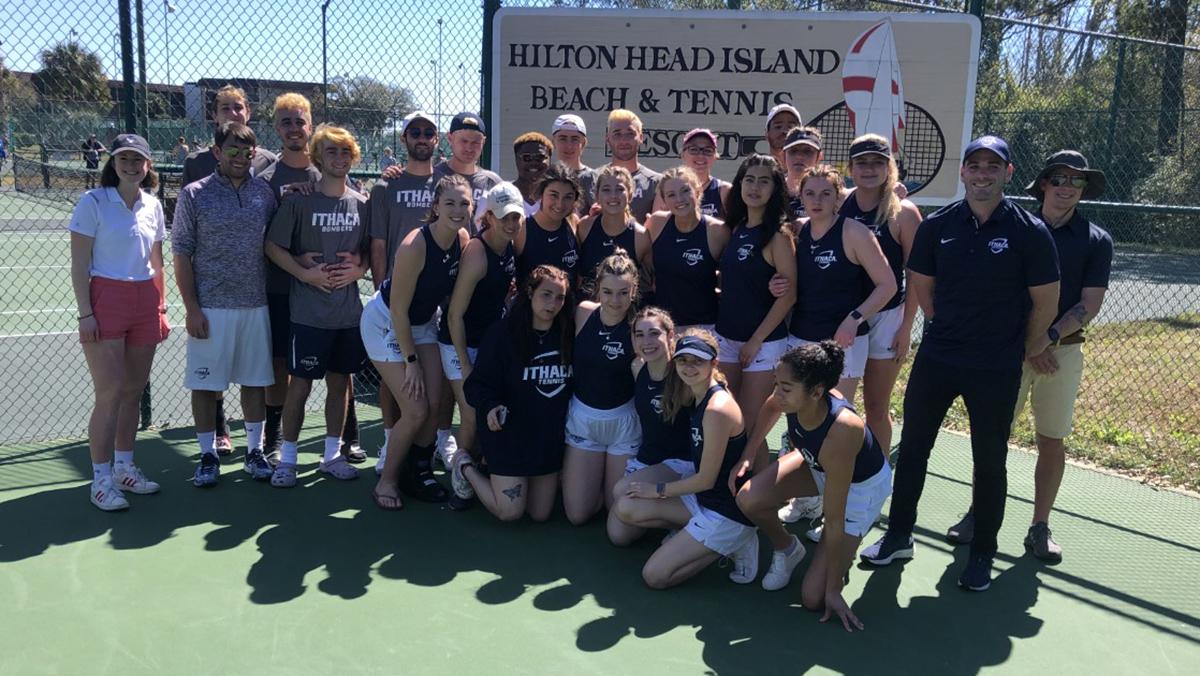 COURTESY OF CHRIS HAYES
The Ithaca College men's and women's tennis teams were among five programs that traveled south to compete during the college's spring break, March 12 and 20.
By Dustin Terry — Staff Writer
Published: March 23, 2022

The Ithaca College tennis programs were in the midst of their annual spring break trip when the 2020 season was canceled, ending the trip before the Bombers competed in their fifth and final match of the week.

“We went down to Florida and that’s where our season ended,” Chris Hayes ’16, head coach of the men’s and women’s tennis teams, said. “It was surreal to say the least.”

Hayes said the teams were eager to return to this tradition in 2022 after the abrupt end to the last trip. During this year’s spring break from March 12 to 20, several Bombers teams returned to the annual tradition by traveling to compete. The college’s baseball, softball, men’s lacrosse, and men’s and women’s tennis teams traveled south for the spring break. Both tennis teams played four matches in Hilton Head, South Carolina, and the men’s lacrosse team played a pair of games in Memphis, Tennessee. The baseball team played in the Russmatt Invitational during the break, competing in seven contests in Florida. The softball team also traveled around North Carolina to play four doubleheaders before playing two games in Salisbury, Maryland.

The college’s spring sports teams were able to play a restricted season in Spring 2021, facing only local and conference opponents. This season, the college’s teams were allowed to head down South again for a spring break trip.

For the athletes and coaches, this was an experience that many have either missed out on or experienced for the first time. Freshman Anna Cornell, pitcher on the softball team, traveled south for her first time with the team. Cornell said that the excitement surrounding the team had been building up and that a few upperclassmen shared their experiences.

“The upperclassmen have expressed the impact of the trip from a team bonding standpoint in addition to the athletic opportunity itself,” Cornell said. “With this being the first spring break for over half of the players on our roster, we are hopeful that spring break will allow us to continue to define our team values and determine what sets ‘Team 54’ apart from previous teams.”

Each of Ithaca College’s teams traveling south faced unfamiliar competition. Jeff Long, head coach of the men’s lacrosse team, said a majority of its focus had been on the first five games, and it had started the season with a 4–1 record before the break.

“We’re shifting gears and we’re starting to put together scouting reports of the two teams we’re playing,”  Long said. “It’s a new territory, new teams and it’s kind of exciting from that perspective.”

The men’s lacrosse team won both of its games in Tennessee. The South Hill squad defeated Birmingham-Southern University 18–10 and Rhodes College 16–6. Sophomore attacker John Sramac scored his 23rd goal of the season and junior attacker Jake Erickson earned his 20th during the trip. The Bombers returned to New York with a 6–1 record.

The softball team finished the trip with a 4–6 record, bringing it to 5–7 on the season. The Bombers swept Pfeiffer University winning 4–1 and 8–0. The Bombers also defeated William Peace College 11–1 in a series split. The team lost both of its games to Greensboro College and Guilford College.

While heading back to New York, Ithaca College defeated Muhlenberg College 9–0 and lost a close game 3–0 to Salisbury University, which is ranked second in the country. Cornell struck out 38 batters over 22.2 innings pitched over the break. She also threw a one-hitter against Muhlenberg.

The Bombers men’s tennis team went 2–2 during its trip to Hilton Head. The squad defeated Nichols College 7–2 and Webster University 9–0. The team was defeated 6–3 by Washington College and 7–2 against Asbury University.

The women’s tennis team also went 2–2 playing the same opponents with the exception of Webster. The team emphatically defeated Nichols 8–1 and Asbury 7–2. It lost close matches to George Fox University and Washington College, falling 5–4 to both teams.

The Bombers baseball team had a productive trip, 6–1 during the break, which was highlighted by a 3–2 over No. 11 Wheaton College. The club scored 16 runs on North Park University and the University of Wisconsin-La Crosse winning both games. The squad also defeated Springfield College and Franklin and Marshall College scoring 10 runs in both games. The club finished its spring break with a 7–2 victory over Stevenson College.

Although COVID-19 restrictions still loom over everyday life, Hayes, Long and the teams are cautious and know the importance of athletics teams being able to travel extended distances once again.

“When you’re out there shoveling snow in February and it’s 10 degrees, it’s nice to have something to look forward to,” Long said. “It has been such a crazy last couple of years and I think it’s going to be really special.”