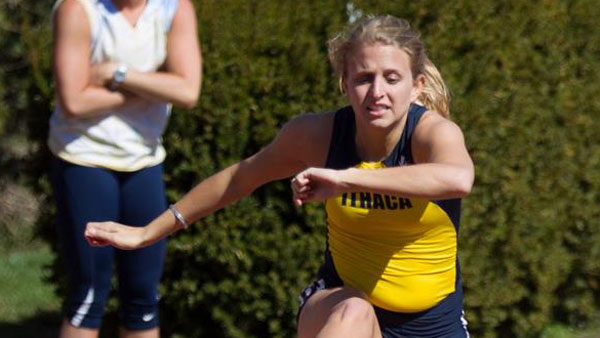 For junior sprinter Leigh Martino this spring semester marks a sort of new life. The bad luck and the surgery that kept her out of track from last April to January seem finally to have gone away.

As one of the captains on the women’s track and field team, Martino has been determined to make up for lost time. In one of the Bombers’ recent meets, Martino marked her season’s best performance, placing fifth in the 500-meter dash with a time of 1:19.26 at the Eastern Collegiate Athletic Conference Indoor Championships in Boston on March 8. However, her path to reach this point was long and hard.

Martino was injured April 28, 2013, during the New York State Collegiate Track Conference Heptathlon at Butterfield Stadium. It was the same race she suffered an anterior cruciate ligament tear one year earlier. Head coach Jennifer Potter said she could only watch in disbelief.

“It was heartbreaking,” Potter said.

During the race, Martino hit the last hurdle and clipped her left knee, causing her right leg to twist and her right knee to pop, resulting in an ACL tear. When Martino realized this injury required surgery, she said, many thoughts raced through her mind.

“I said to myself, ‘I can’t believe this happened twice in a row. Why is this happening to me again? Maybe there is a reason I should not be running,’” Martino said. “I never thought about giving it up, but I was like, ‘This is hard. It’s going to be too hard to recover from the injury.’”

Just one year earlier, Martino had another knee injury. As a freshman competing in 100-meter hurdles at a meet at Rensselaer Polytechnic Institute, Martino caught her foot on the hurdle, causing her to fall. This time, she injured her posterior cruciate ligament, another major knee ligament.

PCL injuries usually don’t require surgery, so Martino did physical therapy for three months this past summer after having surgery in May. When the injury nightmare came back last April, Martino was afraid that her collegiate career with the team was at risk. However, Martino changed her mind after she discussed the issue with her family, coaching staff and the doctor.

“Once I talked to my parents, trainers and doctor about recovery process, and after they said how quick it would be, I thought: ‘Oh, perfect, I can totally get back in time for the next season,’” she said.

Martino said outdoor track head coach Courtney Gray had an important role during the recovery. Gray often texted Martino, talked with Martino’s doctor and encouraged her, saying that she would come back to compete quickly.

During the summer, the team and the coaching staff chose Martino as one of the captains. She accepted, though she said she was aware of the challenge of being a captain for the first part of the season while not being able to perform the same daily workouts her teammates did or compete at meets.

“It was hard at first because at the beginning I could not do anything,” Martino said. “So I just went there, trying to learn freshmen’s names so they knew my face.”

However, Martino said, the situation was not worthless in terms of her personal growth.

“I saw things more from [Potter’s] standpoint than an athlete standpoint,” Martino said. “I see more where she is coming from when she makes decisions. Being on the other side, I understand now more, and it helps me to be captain.”

Potter said the difficulties made Martino stronger, and now Martino is an even more valuable asset than before the injury.

“It is just easier for her to lead by example,” Potter said. “When you are not able to practice with everybody it makes it more challenging to be a leader, but she did it very well.”

Junior sprinter Brittany Greene trains with Martino every day. Greene said Martino rose to the challenge and was able to be a great captain, demonstrating her strong leadership even before returning from injury.

“Being injured can be a trying time for anyone,” Greene said. “But [Martino] made the most of it and has come out the other side stronger than ever. She helped inspire and motivate teammates to achieve new successes.”

Martino’s first meet of the track season was at the Empire 8 Indoor Championship on Feb. 1, placing 10th in the 800-meter with a time of 2:31.57. Then, at the Boston University Valentine Invitational on Feb. 7, she clocked a time of 1:20.27 in the 500-meter. Martino said it was good to be back on the track after such a long recovery.

“My initial concern was I wasn’t going to be as fast as I was before,” Martino said. “However, at [the Empire 8 Indoor Championships] I realized I may be even faster because I got stronger with all the physical therapy and things that I had to do. I am now very excited for our next meets and the outdoor season, we have a very good chemistry, everyone wants everyone else to succeed, and I am very happy to be a part of that.”