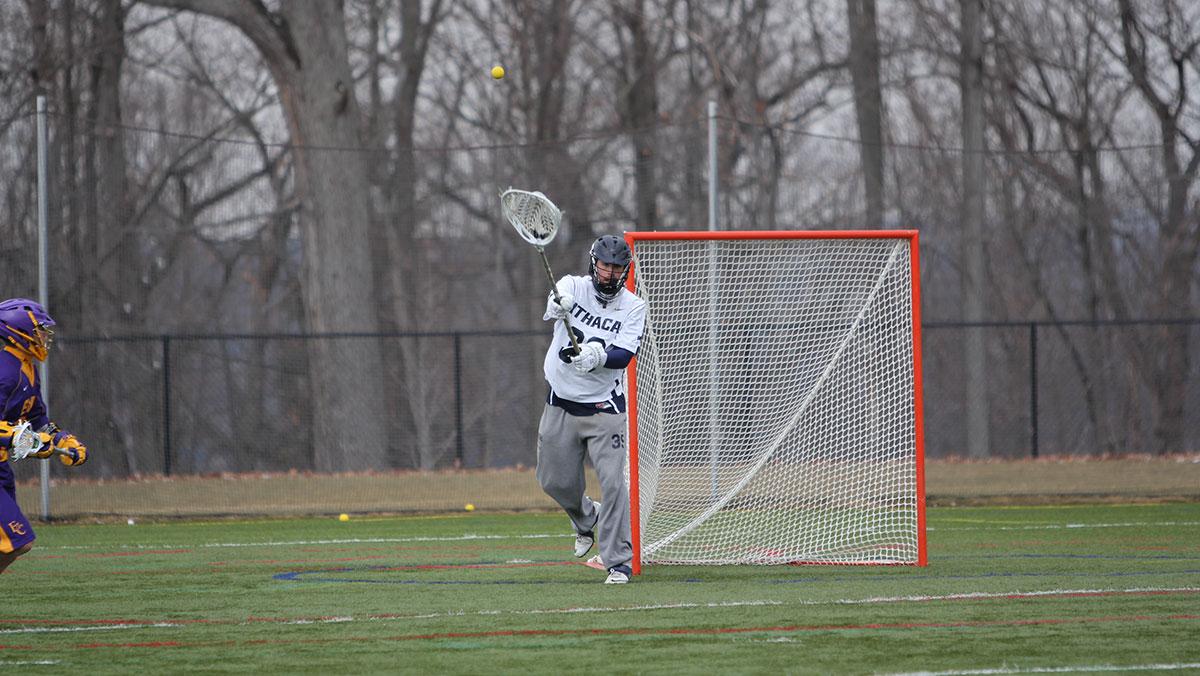 Caitie Ihrig/The Ithacan
Junior Scott Sidnam, the men’s lacrosse team’s starting goalkeeper, tosses the ball back to his teammate after making a save during the squad’s 19–1 win March 21 at Higgins Stadium.
By Karly Redpath — Senior Writer
Published: March 25, 2015

The second quarter of the men’s lacrosse team’s game against SUNY Oneonta on March 17 had just begun when the Red Dragons’ Brandon Hickey won the ball off the faceoff. Hickey passed the ball downfield to midfielder Mike Metzger, who sprinted down the middle of the field. Metzger carried the ball into what was a 1-on-1 with junior goaltender Scott Sidnam, wound up and shot. Sidnam lunged toward his stick-side, and the ball bounced off his stick and back into play. Ithaca recovered the loose ball and carried it back down the field. Just seconds into play, Sidnam made one of his nine saves to keep the Bombers in the lead.

The Bombers ended up clinching a tight 9–8 victory over the Red Dragons, and Sidnam’s save was a crucial part of the win as it allowed the Blue and Gold to stay in the game. Stopping shots is something he has become accustomed to, as he has started in the net for the last three years. So far this season, Sidnam has played the majority of the Bombers’ minutes, and through that has come to serve a major leadership role.

In his first year on the team, Sidnam was forced to step up after the original starting goaltender quit the team. He did just that and was named the Empire 8 Goalkeeper of the Year while making the All-Empire 8 First-Team and the All-Tournament Team. He started in all 18 games for the Bombers and made 190 saves with a goals against average of only 6.99 in 1,038 minutes of play.

But Sidnam said he didn’t necessarily have a knack for the position when he first began playing organized lacrosse at the age of 7. He said he ended up in the net because he wasn’t a fan of the physical demand necessary in playing a field position.

“I started playing goalie fourth or fifth grade, and it was mostly because I hated to run. I was pretty lazy,” Sidnam said. “Since I had a goalie stick around I figured I’d just play goalie and not have to move that much.”

Sidnam’s two older brothers both played the sport, one as a field player and the other as a goalie, which influenced the Camillus, New York, native’s decision to pick up a lacrosse stick.

“Even before I started playing on a team, I was in the front yard playing with my brothers,” he said. “Where I am from, pretty much everyone starts playing lacrosse at a young age.”

Head lacrosse coach Jeff Long said over the past three years with Sidnam in net, he has seen him grow and develop, something he said he believes his goaltender will continue to do.

“He’s grown a lot over the past few years, and he continues to grow,” Long said. “He’s more vocal now, has better body language and can really keep a level head.”

Though he has improved steadily throughout his career, Sidnam showed promise even in his first year on the team. Junior defenseman Eli Gobrecht, who has been starting with Sidnam since he was a freshman, said there was one game during that year where he realized just how good his teammate was going to be.

“The Cortland game was when I realized that we had somebody special in net,” he said. “We got a penalty before the first whistle even blew … They ripped off about five shots on that man-up opportunity, and Sid stuffed their shooters every single time. We ended up losing the game in double [overtime], but that had to be his breakout game.”

In his sophomore season, the Bombers claimed an Empire 8 title, and Sidnam was an All-Empire 8 Second-Team selection and the MVP of the Empire 8 Championship Tournament. He started in all 20 games in his second season, making 185 saves during 1,063 minutes of play for a save percentage of .557. Sidnam made double-digit saves eight times, registering a season-best 18 in the NCAA second round at top-ranked Rochester Institute of Technology.

Senior defenseman John Figarelli said he has a great deal of respect for his teammate because of the difficulty of the position.

“I honestly think you have to be absolutely nuts to be a goalie,” he said. “Just mentally, you have to be the toughest guy on the field because you have to lead and communicate with six other guys all while trying to stop a little white ball being shot at you at 90 miles per hour.”

Sidnam said for him, the thing that makes the position different than others in the game is the need to remain more composed and not let mistakes affect him.

“You’ve got to have a short memory as a goalie,” he said. “I mean you let in a bad goal and you just have to get over it and move on, focus on the next one because those are going to happen so you have to be prepared for it and handle it well.”