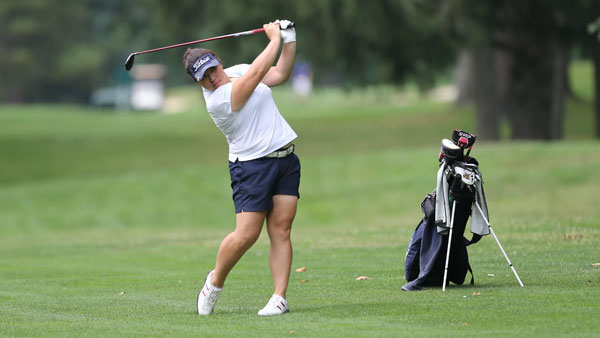 The national championships: a tournament that only the best ever get to participate in. Bombers junior golfer Sharon Li will have the opportunity to go back to the championships in an attempt to finish even higher in the standings than she did last year.

In 2013, Li was the only player to represent Ithaca College in the tournament.

Li’s impressive performance helped her achieve scores in the 70s three out of her four rounds, with par for the tournament set at 72.

In her first experience at the NCAAs, Li finished the tournament tied for 10th place with then-junior Doyle O’Brien of University of St. Thomas. Both women finished with a score of 313. Li’s performance allowed her to crack the top-10 list of golfers out of the 111 that participated.

Li will compete in the NCAA Division III Women’s Championship for the second consecutive year May 13–16 at Mission Inn in Howey-in-the-Hills, Fla. Though the specific names of her opponents have yet to be released, Li said she knows she will face steep competition. This year’s tournament field will be released on May 5.

Li said she is looking to ascend to the top of the leaderboard and said being on a team in such an individual sport helps her stay grounded.

“I gradually learned what it was like to truly play on a golf team where teamwork, character and respect play a big role in becoming a successful team and a true team player,” she said. “From the beginning of my college golf career and to this very moment has been nothing but joy and excitement.”

Li is no stranger to making history as a member of the Blue and Gold, as she was the first Bomber golfer to ever receive both a bid to the NCAA Championship and win five tournaments in one season as an individual participant, one being the Empire 8 Championship on Sep. 14 and 15. Li also holds the Bombers’ best score in 18 and 36 holes. In 18 holes, her record is a 68, and her best score for 36 holes is a 141. She set the school’s record on April 26 and 27 of this year  as she notched scores of 68 and 73 in the Williams Northeast Elite Invitational. She also received Division III First Team All-American honors from the Women’s Golf Coaches Association.

However, Li has not always played at the high level she is performing at now. Head coach Dan Wood said Li has come a long way since she entered the college in 2011.

“We knew from the moment that Sharon agreed to come to Ithaca that she would be an outstanding player for this team, but we also understood that it would take some time,” he said.

While growing up in Hong Kong, Li did not have easy access to proper golfing facilities. The closest adequate golf course was nearly an hour away.

“Growing up, most of her golf instructors worked with her mainly on her full backswing and didn’t spend nearly enough time on her short game play, which is why now here at Ithaca she is learning and making up for opportunities she wasn’t receiving at home,” Wood said.

As a freshman, Li shot an average score of 80.24 strokes. By her sophomore year, she cut her game down to an overall average 77.18 strokes. As a junior, she made more progress in the shot reduction department. For this year her average was 75.81 after 16 rounds, approximately 4.5 shots better than her freshman average. Li’s improvement allowed her to move into the top 10–ranked Division III women’s golfers in the nation, becoming just one of six individuals allowed to participate in the NCAAs representing the college. At the beginning of the 2013 season, she was ranked as the fifth-best DIII women’s player in the country by GolfStat.com.

Wood has seen Li’s improvement in all areas of her game but her short game progression, the part of the game that is viewed by her teammates as the most important and challenging, became much more evident this season.

“Her ability to focus in on bunker shots, chipping, pitching and putting continues to get better and more accurate,” he said.

In addition to improving her game, Li has also attributed her personal improvement to her comfort and knowledge of the courses she has played on.

“She is starting to master the courses she is playing,” Wood said. “Her familiarity with each course is also helping to get her stroke average up and help her understand similar situations more and more.”

Junior Kelsey Baker, one of Li’s teammates, said Li does a great job of keeping her composure regardless of how she is playing.

“She is very focused when she is out there on the course and has a great ability to not let things distract her while she is playing,” Baker said. “She is constantly trying to get better and make her teammates around her better as well.”

The magnitude of the NCAA tournament has not yet fazed her, although she said the work it took to get there was not easy to handle.