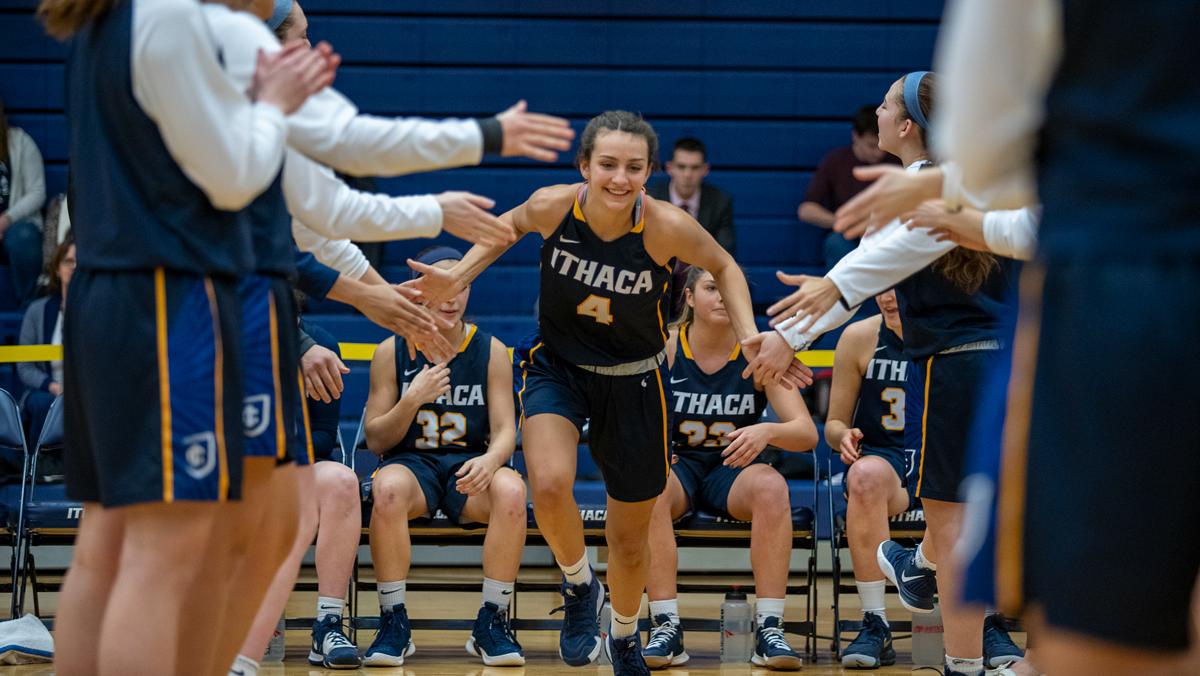 Peter Raider/The Ithacan
Junior guard Grace Cannon runs through a tunnel of her teammates before a game against Union College on Jan. 24 in Ben Light Gymnasium.
By Abbey London
Published: February 4, 2020

Junior guard Grace Cannon has been a star on the court for the Ithaca College women’s basketball team since her freshman year, but Cannon has set herself apart this year as an emerging leader for the young squad.

Cannon currently has 235 points for the 2019–20 season. Her highest scoring game was Nov. 19 at the South Hill squad’s home opener against SUNY Cortland. This year, the squad lost five top senior players from the 2018–19 season who each started in 31 games. The women’s basketball team is currently second in the Liberty League with a record of 10–2 and an overall record of 14–5. The Bombers are averaging 65 points per game.

Photo editor Abbey London sat down with Cannon to discuss this year’s ongoing season, her personal growth and leadership role as a junior.

Abbey London: How has this season been so far for you and the Bombers?

Grace Cannon: I think the season has gone really well. We started off pretty rocky, which is unlike us, but I think we responded really well after Thanksgiving break. Our league is really tough, so, having two games and a lot of close games within a short period of time, I feel like as a team, we’ve responded really well and are showing up for all of our games.

AL: How has the team’s chemistry changed since the 2019 seniors graduated?

GC: It’s definitely a lot different than it was last year. Going from five seniors to two seniors — one being a transfer — and only having two returning starters, myself and [senior forward] Cassidy O’Malley, I have had to step up and be way more of a leader than I thought I would be as a junior. I have the starting experience of going deep into the NCAA tournament that the younger kids on our team do not have. It’s definitely not just the seniors in leadership roles. The upperclassmen are filling these spots too. We’re looking for the sophomores and everyone else to really step up and be more of a team.

AL: Have you seen any of the underclassmen step up? Are there any players that you’ve seen personally stand out and should be watched for the future?

GC: I think we have a really good freshman class. Sophomore guard and forward Cara Volpe is starting now and going from not really playing a lot last season to having substantial minutes this season. She’s definitely stepped up in that role and fulfilled it very well. Freshman forward Emily Dorn and freshman guard Natalie Smith have really stood out to me with the work ethic they have and being able to show up in games and in practice. I think having that young talent will really be good for us looking forward to next year and the years to come.

AL: After the win that you guys had Jan. 28 against Hamilton College, what are you looking to see carry over into future games?

GC: I think using that confidence that we had in Hamilton. It’s hard on a Tuesday nonconference game to show up, but we did and played well against a very good team. We really got our confidence back, and I think we want to keep that confidence and keep the chemistry that we have going into the weekend and into the rest of the season.

AL: What do you think still needs to be improved upon based on your past games this season?

GC: I think our communication overall as a team could always improve. We always focus on playing a full 40 minutes, not just having a great first half or a great second half, but a full 40 minutes of great defense and great ball movement and overall a good game because anytime we do that we have the talent and will win.

AL: How would you compare Ithaca College‘s style of play to your competitors?

GC: I think a big thing we’ve seen throughout the league is playing a 2-3 zone [defense]. That’s something we don’t play, but people love to play against us. I think a lot of the threats that we have are offensive, like how fast we play in our transition. Teams try especially early to slow that down. They’ll put [their defense] into three zones to try to not let us get those fast break points or just score initially off our offense. I think that’s something we’ve definitely focused on playing against and have improved on a lot.

AL: How have you seen your individual game improve throughout the years you have played at Ithaca College?

GC: I’ve become a lot more confident as a player and leader. Coming in as a freshman, I was going through the motions, playing my game and not really speaking out vocally. I think, especially this year because of my experience last year as a sophomore starter last season, I have been getting comfortable with telling people what I think is best or pointing out people’s mistakes and trying to help them and being more confident as a leader. In my game, I’m trying to improve in all aspects, not just being able to score, but being able to rebound, get steals and being able to always affect the game positively. I think I’ve improved that with every year too.