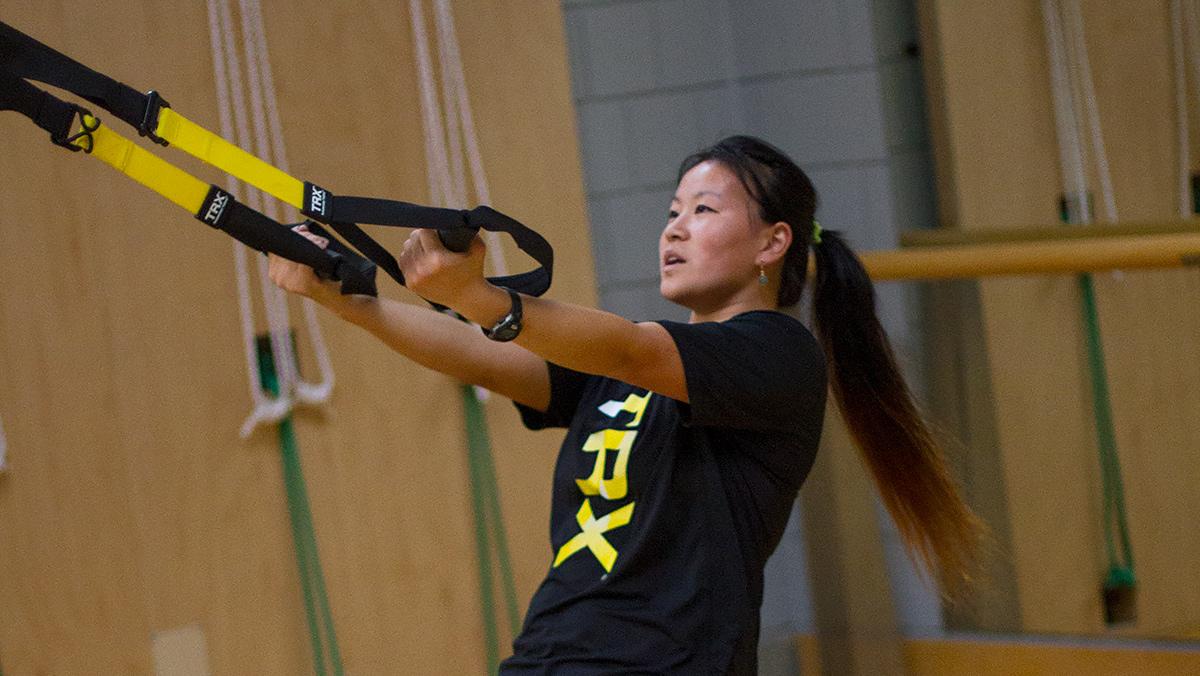 ALEXIS LIBERATORE/THE ITHACAN
Junior Maggie Eckerson teaches total resistance exercise (TRX) classes from 5 to 5:45 p.m. every Sunday. She attended a TRX instructor training camp after her freshman year of college for certification to be able to teach the course.
By Colin Tessier — Contributing Writer
Published: September 21, 2016

Walking around with a smile, upbeat music blasting in the background, junior Maggie Eckerson instructs her students to put their feet in the hanging resistance bands. Then, as she teaches her participants how to do an elevated plank, Eckerson takes time to make sure each student is holding the position correctly.

Every Sunday, Eckerson can be found at the fitness center teaching total resistance exercise (TRX) classes, but every day, she strives to live an active lifestyle. When not teaching, she is working out nonstop, taking her friends through workouts, practicing mixed martial arts or hiking up a mountain.

Eckerson said her sports background inspired her to become a fitness instructor, as she has been involved in sports since she was just learning to walk. At the age of 3, she began competitive gymnastics and progressed up to level 10, the level right below elite.

She said she had planned to continue at Ithaca College, but it became difficult for her to balance it with her classes. 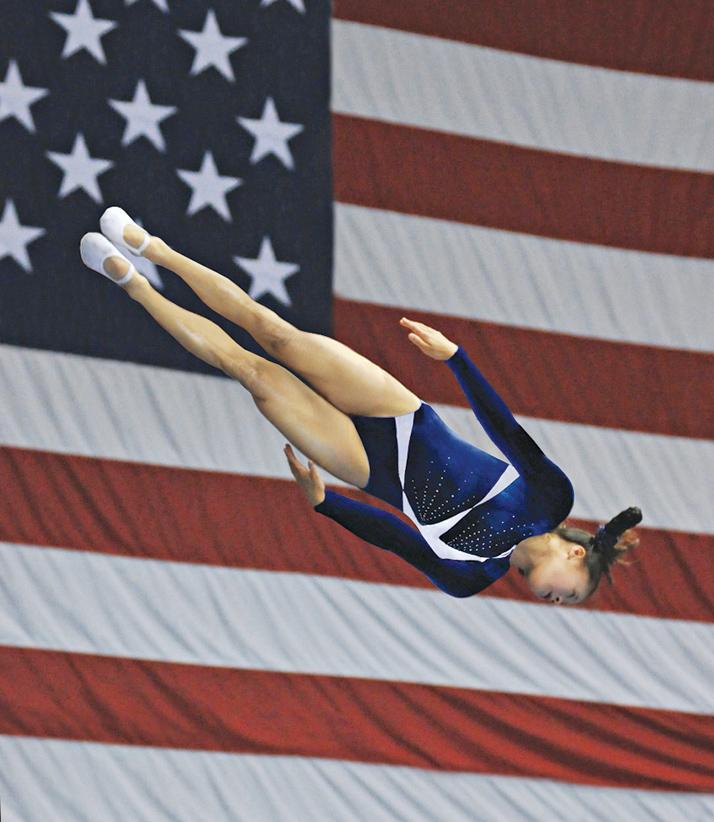 Eckerson began gymnastics at the age of 3 and continued the sport throughout high school. PHOTO COURTESY MAGGIE ECKERSON

“Gymnastics is hard when you get to higher levels,” Eckerson said. “My parents were worried, and I did not have time to compete. I was so busy.”

Eckerson began her training in martial arts at the age of 6 and acquired a black belt in Kung Fu, which is one of the highest honors the sport offers. She still practices Kung Fu on her own at the Fitness Center and participates in some annual competitions.

During high school, she was a member of the track and field and volleyball teams. She was a captain of both teams during her senior year, and as part of her duties, she said, she led offseason practices. This, she said, sparked her love of helping others.

“I was helping my friends do workouts, given that I had competed on so many sports teams,” Eckerson said. “As a team captain, I got to lead the workouts, and it’s a lot of fun being able to motivate people. I had a lot of people running to me, asking me how to do a pushup or a chin-up.”

She said her coaches growing up also inspired her to live a healthy life.

“I wanted to be like them and share my passion for fitness with other people,” Eckerson said.

Eckerson said, she had never participated in a TRX class until she arrived at the college for her first year. But once she started, she was hooked.

TRX was invented by a Navy SEAL who was in need of a way to stay in peak physical shape. TRX uses resistance bands and combines strength, flexibility and endurance, and the resistance on the bands can be adjusted for all abilities.

“It is a great way to build up muscular endurance and muscle strength because it is so easy to adjust your  weight,” Eckerson said.

Sara Bellanca, a senior BODYPUMP instructor, said Eckerson has many notable strengths that make her a great instructor. BODYPUMP is another class taught at the Fitness Center, which focuses on toning and strengthening muscles using barbells.

“She’s always willing to help people if they’re new and show them what to do,” Bellanca said. “She’s very strong. She always puts in a lot of effort, and she knows how to make workouts harder. She can modify them for everyone.”

Eckerson now teaches eight to 10 students every Sunday. A typical class begins with a warmup, followed by cardio exercises. Eckerson said she designed a specific playlist for the cardio
session, which consists of eight 45-second songs. During each song, the participants perform a different exercise.

Next, she takes the class through a set of arm exercises that they cycle through twice, also set to eight 45-second songs, before moving on to hamstrings and core exercises, where each participant will perform three different exercises set to five-minute songs.

“I explain all of the exercises at the beginning before the intervals begin,” Eckerson said. “If I were to stop every 45 seconds to explain the new exercise eight times, the participants would not keep their heart rate up during all the intervals.”

“Maggie is naturally gifted; it’s not for show,” Perkins said. “Maggie is an incredibly active and athletic person. She is very talented and skilled.”

When not teaching, Eckerson said, she is regularly at the gym, either working out by herself, taking others through workouts or practicing mixed martial arts.

She is also an avid hiker and has hiked all but one of the Ithaca gorges, which she plans on checking off her list this semester. Eckerson said she would encourage anyone, no matter what their ability level is, to try her class. One of Eckerson’s favorite aspects of being an instructor is the ability to help people and motivate them.

“It is awesome that I am the person that motivates people,” Eckerson said. “Every day, teaching is a lot of fun.”