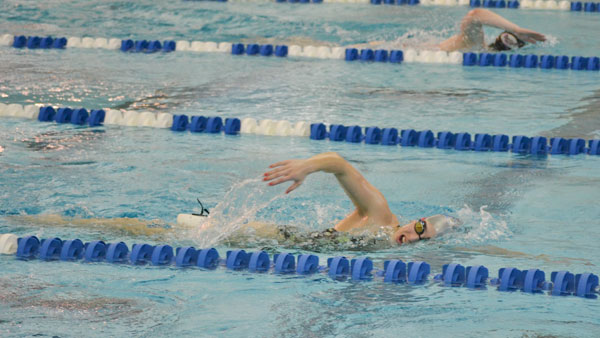 Out of the six swim teams in the Empire 8, the Ithaca College Bombers, by far, have the largest freshman class added to its team this season. With a total of 20 swimmers and divers on a roster of 39, the average of seven new swimmers to the rosters at Alfred University, Hartwick College, Nazareth College, Stevens Institute of Technology and Utica College look trivial. The Bombers can expect a growing season as they combine the strong leadership and experience from their upperclassmen with their incoming talent.

Since the 2009–10 season, there has been an average of 13 women recruited to the swimming and diving roster each season. Senior captain Elizabeth Gawyrs was one of 14 other swimmers brought onto the team as a freshman.

Now in her final year, Gawyrs said she thinks the larger freshman class will be extremely beneficial to the swimming and diving program.

“[Having 19 new women] is really going to make the team grow and be a stronger team,” she said. “As long as they stick around and don’t lose interest, they’ll be really powerful.”

Head coach Paula Miller is confident in her senior leaders on the team this year. She said she believes that because of their experience competing together for the past three seasons, the senior leaders are prepared to handle a larger first-year class.

“It’s a great time to get a big class because the senior leaders can handle the numbers and the different personalities, they’ve seen it all,” Miller said. “It’s a perfect opportunity to have the freshmen come in and learn from the best.”

Freshman Grace Ayer has placed first or second in the seven events she has raced in during the first three meets this season. She said the freshman class has many talented first-year swimmers who look forward to training hard during practices.

“The team is so different than what I’m used to,” Ayer said. “There are a lot of really talented freshman girls this year. Everyone is able to motivate themselves and each other in the pool in a positive, constructive way.”

Freshman Lake Duffy talked about how the number of first-year swimmers and divers on her team and her upper-class teammates have made her transition into life at the college easy.

“It’s really nice to have people who are the same age as me and who know exactly how I’m feeling in the pool and at school because this is all a new transition for us,” Duffy said. “It’s great to have as much support as I’ve been given this year with the larger class and to have a team that’s so open.”

Freshman Brenna Dowd came in second place in the 1,000-yard freestyle (11:33.39) in the Bombers’ meet against William Smith College on Nov. 5. She said the 39-swimmer roster will benefit the team when it comes to racing.

“With swimming, having people with different strengths and weaknesses is something that’s really helps when it comes to competitions,” Dowd said.

In the Bombers’ first three meets of the season, the freshman class certainly proved that it will benefit the swimming and diving team this season.

Though there have been multiple individual successes for many of the 20 new swimmers on the roster, Miller stressed that no one person ever wins a meet for a team. She said her swimmers need to keep their eyes set on their goals for the season as they continue to grow as a team.

“Our goal is to win those conference championships, and one person cannot do that, two people can’t do that,” Miller said. “It has to be the team.”