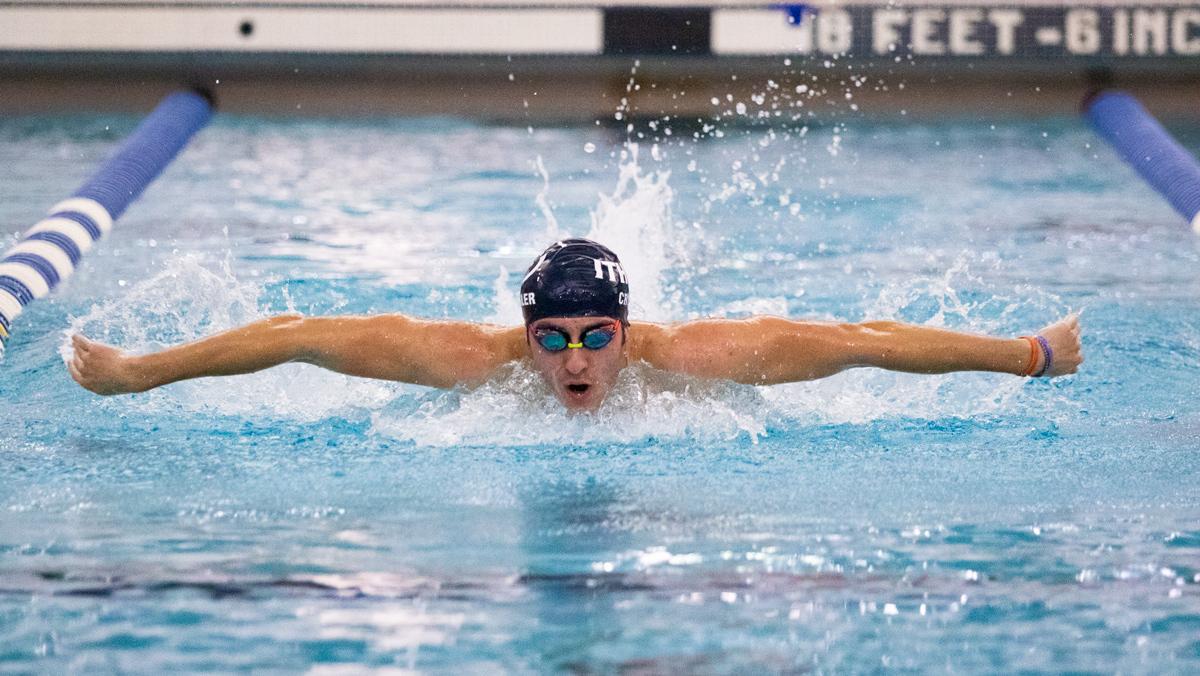 The Ithaca College men’s swimming and diving team has high hopes for success this season as the team gains a large freshman class along with many talented members returning.

They opened the 2019–20 season at home Oct. 19 sweeping all three other teams at the quad meet: SUNY Fredonia, The College at Brockport and Buffalo State College.

This season, the Bombers added 11 freshman swimmers and divers, bringing the total roster to 33 athletes. This is the biggest that the team has been since the 2012–13 season. With the biggest roster size in the Liberty League, head coach Kevin Markwardt said he has high hopes for this season.

“We have a nice balanced team,” Markwardt said. “We don’t have a weakness per se. We have a big, strong group of guys. This is the deepest we’ve ever been.”

One of the team’s captains, senior freestyler Liam Maginnis, said the team’s culture is one of its strengths. Last season, Maginnis finished 10th in the Liberty League Championship in the 100 backstroke.

“We have a very good work ethic,” Maginnis said. “Everyone practices hard. We all work hard, and we’re faster because of it.”

Markwardt said the diving team will score significant points for the Bombers. The group’s most experienced member is junior Justin Moczynski, and there are five underclassmen divers this season. Moczynski qualified for the NCAA Division III Swimming and Diving Championships in 2018. This season, he is being challenged by freshman diver Ethan Godfrey. Markwardt said he believes that with Godfrey pushing Moczynski, Moczynski has the potential to score at the national meet.=

The South Hill squad also has a strong butterfly group this season led by sophomore Matt Crysler. He is accompanied by sophomore Spencer Brownewell, who is a major point scorer because he also competes in the backstroke.

“The passion and enthusiasm for each other we have this season is going to help us dominate,” Crysler said.

Senior breaststroker Andrew Mikhailichenko also made the B-cut for nationals last season. He was a conference champion for the 50–, 100– and 200-yard breaststroke and the 400 individual medley.

Senior Nate Bartalo, who swims butterfly and freestyle, was also a conference champion last season. He won the Liberty League in the 100-yard butterfly for the second year in a row. Markwardt said he believes Bartalo has the potential to qualify for the national meet.

Anthony Porto, junior individual medley and butterfly swimmer, transferred from SUNY Oneonta after his freshman year. Last year, he was not eligible to swim due to NCAA transfer rules. Coming into this year, Markwardt said that he was not sure how Porto would perform. Porto smashed expectations when he took first in the 200-yard freestyle at the Bombers’ first meet this season. He also finished second in the 100-yard breaststroke, only beaten by teammate Mikhailichenko. He also helped the 200-yard medley relay team to a second-place finish.

Maginnis said the team’s inexperience at competing at the collegiate level makes it very versatile, and many athletes compete in multiple events. Sophomore Michael Sheehan was also a strong performer as a freshman last year, and he swims distance, the individual medley, the butterfly and the freestyle.

“Where we’re strong, we need to be deeper, and where we’re deep, we need someone to step up and score some points,” said Markwardt.

The Ithaca College men’s swimming and diving team’s next meet is the Ithaca Bomber Invitational Dec. 6–8 at the Kelsey Partridge Bird Natatorium.