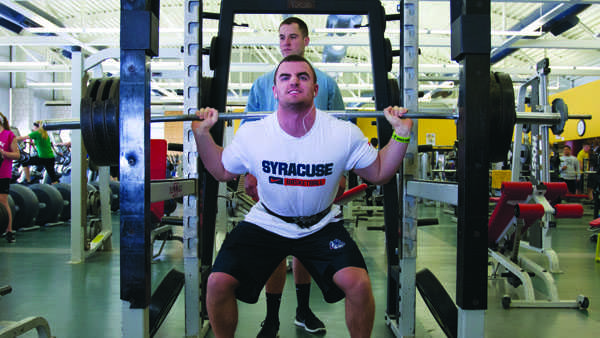 The Fitness Center appears desolate from outside, as the lights are off and curtains envelop the facility. Inside, however, the familiar rhythm of weights slamming to the floor is accompanied by a combination of heavy metal and rap blasting through the speaker system as five dedicated lifters begin their early Saturday morning routine.

Since the beginning of the fall semester, senior Max Gordon has unlocked the doors of the Fitness Center every Saturday at 8:30 a.m. For most students, the facility opens at 10 a.m., but as a building assistant at the facility since last spring, Gordon has a master key that grants him access to the building at all times. He enters with his co-worker, senior Stevie Marcano, for the facility requires two CPR-certified people to be present during workouts.

Marcano said the tradition began when Gordon, a journalism major, had to travel in late August to cover the 50th anniversary of the March on Washington, in collaboration with PBS, and the two still wanted to get to the gym before he left.

“It kind of originated from that,” Marcano said. “I really needed the workout, and in the morning you just feel so much better. It’s such a great way to start the day.”

Marcano, who is a health care management major, specializes in CrossFit, a high-intensity strength and conditioning program designed to improve overall fitness. Marcano uses Workout Hero, a CrossFit app on his phone, to monitor the progress of his designated workouts. He selects his workout on the app, which was an AMRAP, or “As Many Reps As Possible,” set for eight minutes and starts the timer.

Every member who comes in on Saturdays acts as part of a larger support system for the group of lifters, motivating their peers with each exercise. As Marcano struggles to finish his deadlifts as part of the CrossFit workout, his arms begin to tremble. Almost immediately, Gordon is at his side.

Fired up by those words of encouragement, Marcano finishes his set and emphatically drops the loaded barbell. His chalk-covered hands rest on his hips briefly before he begins box jumps, a calisthenic exercise used to develop explosive power in the legs.

Afterwards, junior Rachel Stummer, a fellow Fitness Center employee, works on his back with a small ball to remove knots and relieve tension in the muscles. Marcano said his friends and family motivate him every day to keep going hard.

“The support group is just the best,” he said. “Rachel right here, look at this, this is insane. You think I’d be in here working as hard as I did if I didn’t know Rachel had my back, literally?”

CrossFit is a high-intensity strength and conditioning program designed to improve overall fitness.

Workout Hero is a CrossFit app that monitors the progress of one's designated workouts.

The passing rate of the Certified Strength and Conditioning Specialist exam is 63 percent.

In order to use the Fitness Center when the building is closed, there has to be at least two people present that are CPR-certified.

Move the peg to any weight for a fact about bodybuilding.

Each person who commits to the morning routine practices a particular type of workout, such as power lifting, CrossFit or bodybuilding. But everybody at the Fitness Center shares the common goal of improving oneself by testing the limits of their bodies both physically and mentally through every exercise. Gordon said he hopes the atmosphere and intensity created in the Saturday sessions can translate to the Fitness Center’s regular hours.

“It’s a great feel on Saturdays, and we try to get that attitude in here throughout the day when it’s open to everyone,” he said. “Everyone has different goals. It doesn’t matter to me, but at the same time, I don’t want someone to come in here and lollygag.”

On a typical day, Gordon spends most of his time split between eating in the dining halls and working out or training other students in the Fitness Center. Gordon is currently training senior Kedar Gandbhir, his teammate on the men’s club rugby team, to powerlift.

“I really like spontaneity, and I really don’t want to do the same thing over and over,” he said. “I’ll study for my strength and conditioning certification this semester. I have all the physical movements down. I just need to learn the scientific foundations.”

Sophomore Pat Patnode joined in on the Saturday morning workouts after winter break and has used the time to train for competitive weightlifting, which he began doing last semester.

As a dual-major in sport management and business administration, Patnode’s academic and athletic interests inherently merge. Additionally, he said his ambitious nature in other sports has translated well into competitive weightlifting.

“When that competitive mindset in high school after basketball season was done, I did [weightlifting],” Patnode said. “I was sore as hell, and I was like, ‘That’s what I want.’ As soon as you start seeing progress, you’re never going to want to stop.”

Patnode competed in the Organization of Competitive Bodybuilders New York State Natural XII, Bodybuilding, Figure and Bikini Championships on Nov. 9, 2013, in Syracuse, N.Y., as part of the teen division. Now 20 years old, Patnode plans to compete in the junior class in future events.

Though not competing in any weightlifting competitions, junior Morgan Vandervort has used the Saturday mornings to train for an upcoming half-marathon. Running at a brisk pace on the treadmill, she does not react to the commotion of the other athletes in the gym. While lifting, she prefers more repetitions of a lighter weight, rather than fewer repetitions with heavier weights.

Vandervort began lifting over the summer after meeting Gordon, who introduced her to TRX training, a suspension training workout designed to develop strength throughout the body. Vandervort said incorporating lifting into her routine has given her a balanced approach to her physical fitness.

“I’m much more focused on the big picture, so I’ll run, lift and do yoga to keep myself nice and limber,” she said. “If I can stay as well-balanced and well-rounded as possible at all times, then I’m much more likely to carry that through for as long as I possibly can.”

As far as motivating fellow students to join the fitness community at the college, Vandervort said it’s important to keep in mind that steady progress requires a strong commitment.

“I always tell people to look at the bigger picture because a lot of people these days want a quick fix,” Vandervort said. “You just have to have an overall good outlook, and working out is just one piece to the puzzle.”

Gordon said he hopes others will feel the same camaraderie in the Fitness Center that he has shared with his friends throughout his years at the college, regardless of their individual workout preference.

“As long as there are people in here with similar goals and are open with one another, there’s always going to be a sense of community,” Gordon said.