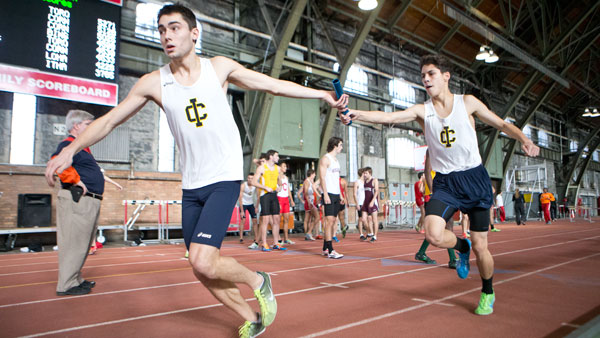 For athletes stepping into Glazer Arena during finals week, the familiar faces of coaches are nowhere to be seen.

Because the NCAA limits the amount of time coaches can hold official practice, over the course of the next six weeks, the men’s and women’s track and field teams must rely on self-motivation to stay in shape for when the season resumes after winter break.

Both squads competed in their first meet of the season Dec. 7 at the Cornell University Relays. At the Cornell Relays this season, the Bombers opened with a strong start, similar to last year’s winter opener. The women’s team hit six Eastern College Athletic Conference qualifiers, while the men earned two ECAC qualifying numbers and even broke a school record in the 60-meter dash.

The first away meet on the schedule for both teams is the Ramapo College Indoor Select held Jan. 18 in New York City, but only 20 athletes will attend from each team. Therefore, the next full-team meet for the Bombers falls on Jan. 25 in Barton Hall at Cornell.

One of the biggest obstacles the Blue and Gold must overcome is keeping their physical shape during the break at the same level they have while practicing with the team on campus. Senior thrower Elaine Abdulky said the teams face a great challenge during the gap between team meets because the time off can cause athletes to fall behind in their training.

“At the first meet, our coach always says, ‘It’s practicing putting on the uniform,’” Abdulky said. “We pick up all that strength before the meet, and it’s really crucial to keep training through the really long break, or you have to pretty much start over when we get back in January.”

To prevent any setbacks, the coaches mail packets of workouts to the athletes’ homes as soon as they leave for break in order for them to have guidelines during their time off.

Freshman heptathlete Tyler Denn-Thiele said he will be able complete the workouts at his own leisure because of the lack of a set schedule. He said he will have to push himself to complete them to stay on par with athletes who have done this before. “It’s not going to really be that structured, so it’s really up to each individual athlete,” Denn-Thiele said. “I am going to use my drive to want to make the big meets, like states, to get myself through this break and stay where I am.”

For many athletes, the time off yields a struggle for motivation. The lack of equipment, indoor space to train and longing for a break to recharge their bodies before the winter and spring track and field seasons are all obstacles during late December and early January.

Sophomore distance runner Sawyer Hitchcock said the Bombers, as Division III athletes, try and push these obstacles aside and focus on the importance of what they have already accomplished through training.

“Having to train alone a lot is a lot more difficult than training with your teammates, and luckily I have some friends I ran with in high school that I can train with over break,” Hitchcock said. “The bottom line is that you have to think about the future and know that the work you put in right now will benefit you later.”

While this stretch of free time does pose some challenges for the Blue and Gold, Denn-Thiele said the break provides a benefit by allowing injured athletes to rest up before the crucial meets that lead up to the championship series.

“I think it is a positive thing for people who have injuries because they can nurse it back to health, before they have to put things in full gear,” he said. “From the time we come back, we only have four weeks, and then we have championship meets. So when we come back, that is when we are really working hard to be ready.”

Abdulky said while the break is not easy for many athletes, she can’t wait to see the results on Jan. 25 in the Upstate Challenge given all the standout performances the teams had at Cornell.

“We have an amazing freshman class that just came in, and [Saturday] I saw a lot of results that you would not normally see during our first meet at Cornell,” she said. “Personally, I know I started off a lot better than I usually do, and I noticed a lot of other people did. It can only go up from here, so that’s really exciting to see.”