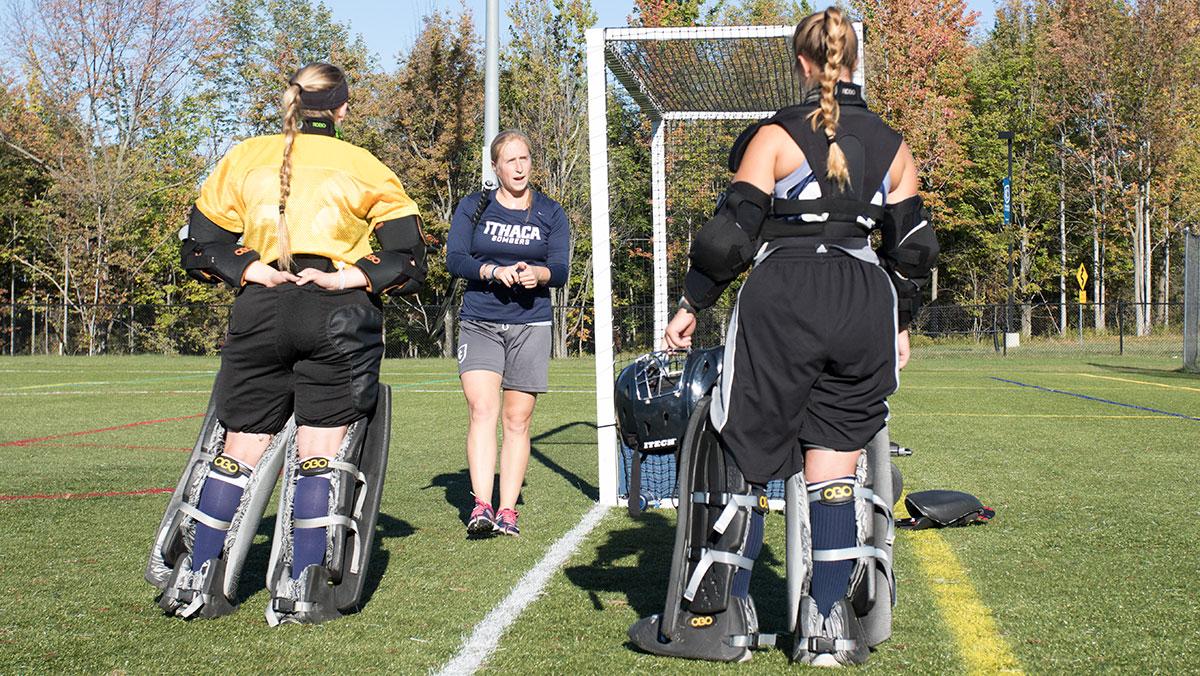 Maureen Ordnung was hired as the assistant field hockey coach by the athletics department on July 30. Ordnung served as an assistant coach at East Stroudsburg High School North in 2012–13. Prior to coming to the college, Ordnung was an assistant coach for Wilkes University in Wilkes-Barre, Pennsylvania, for one year, where she helped place four of her athletes on the Freedom All-Conference Team. She was also a goalkeeping specialist for the KaPow Field Hockey Klub, a position she held from 2012 until she was hired by Ithaca College.

Contributing Writer Katie Callahan spoke with Ordnung about why she chose Ithaca College and how she plans on using her prior experience to help the team.

Katie Callahan: What was so attractive about the program here that made you want to join the coaching staff?

Maureen Ordnung: It was really nice to see an athletic department that was so focused on the well-being of their athletes and coaches. It was really nice seeing the longevity of all of the coaches here. [Field hockey head coach Tracey] Houk has been here for so long and really knows the ins and outs and is able to help me out with things. [Head women’s basketball coach] Dan Raymond interviewed me for the job. Meeting with him and getting his opinion on winning and his opinion on success made me see that the athletics program here matched my values.

KC: How has coaching a club team prepared you for the collegiate level?

MO: It was a lot of fun coaching club because I worked with KaPow, who is run by [Olympian Lauren Powley]. She played in Beijing and was able to share a lot of her experiences with me. She has a very deep understanding of the game, and I am getting there, but I would not have even been able to brush that surface without her. We did a lot of indoor games at [KaPow], so it was very precise. The indoor game makes you really focus on basic skills and ball movement. I think that really helped me to narrow down things and be able to pinpoint issues and focus on them a little bit better.

KC: You are a goalkeeping specialist, so how is the atmosphere in practices with so few goalies to work with?

MO: It is interesting. Coach Houk and I have to really plan out practices because if I am taking the goalkeepers I am focusing all of my attention on two people, and she has the rest of the team. It creates a good atmosphere in the sense that in the beginning of practice I can really focus on them. I am able to put all of my attention and effort on them while the rest of the team is still warming up and working on basic skills. I feel like it is also good that I am not only with the goalkeepers because no one likes having someone breathe down their throat the entire practice. It’s good because I can give them my full attention, and then I can move on to helping them when necessary and spreading out my attention to the rest of the team.

KC: Seeing as you have coached at the high school, club and collegiate levels, what would you say is your favorite and why?

MO: I really enjoy collegiate, and I am really happy being here, but I also really enjoyed the club. It was very hard leaving it. The thing with club is that I was a goalie specialist for all of the teams, so that meant that I was taken to tournaments when I was not coaching a specific team. I got to know everyone and work with a lot of different people, which was a lot of fun. The coaches would bring me in to do team bonding stuff and then I would go off and help another team. I got to interact with a lot of different people, and that is what brought me to coaching. It was not so much field hockey that I wanted to do, but working with younger people. It was just a plus that I happened to be good at field hockey. I liked the club and collegiate levels for separate reasons.