Men’s basketball prepares itself for round two of NCAA Tournament 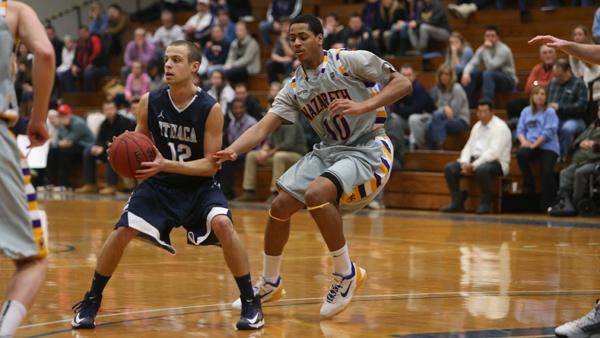 Durst Breneiser/The Ithacan
Senior guard Eli Maravich looks for a pass against Nazareth College’s freshman forward Maurice Mills on Feb. 16 in Ben Light Gymnasium. The Bombers will progress to the second round of the NCAA tournament this weekend.
By Christian Araos — Staff Writer
Published: March 7, 2013

In light of its victory at Springfield College last weekend, the men’s basketball team finds itself in unfamiliar territory: the second weekend of the National Collegiate Athletic Association tournament. They might not be used to where they are in the tourney, but they will be up against a team that they know well: the University of Rochester.

The Bombers have defeated the Yellowjackets only twice since 1975. In 2011, U of R won twice at Ben Light Gymnasium to make the Sweet 16, while the Bombers were knocked out in the first round. The two teams will play Saturday evening at the Louis Alexander Palestra in Rochester with a Sweet 16 berth on the line.

The Yellowjackets entered the NCAA Tournament ranked 18th overall by d3hoops.com. They started off the spring semester at No. 1 after they burst out of the gate, winning their first 18 games. Since then, they have gone 4–4 in their last eight.

DiBartolomeo was teammates in high school with Bombers senior forward Andrei Oztemel. Oztemel said his inside knowledge of DiBartolomeo can only help the Bombers to a certain extent on the court.

“I know what type of player he is, and I know about the player he is capable of being,” Oztemel said. “It’s nice to have that insider scouting information, but it can only do so much. We actually have to go out there and stop it.”

Shutting down opposition guards is something the Bombers have had mixed success doing this season. In their two wins against Stevens Institute of Technology this season, they held senior guard and Empire 8 Player of the Year Sheldon Jones to nine total points. In their loss to Stevens, Jones had 25 points. In the first round victory against Springfield College, senior guard Alex Berthiaume scored 35 points in 35 minutes. Senior guard Eli Maravich said DiBartolomeo must be contained for the Bombers to have a chance.

“He’s a really good player,” Maravich said. “He can shoot, he can drive, he’s strong. I really don’t know what his weakness is, so we’re just going to have to play him tough and not let him get going early.”

As a team, the Yellowjackets are in the top 50 nationally with a field goal percentage just under 47 percent, and they will not be as reliant on one shooter as Springfield was March 2. Junior guard/forward Nate Vernon averages 11.5 points per game and put up 27 points on Jan. 5 against Emory University, a team that is also in the second round of the NCAA Tournament. Sophomore guard Tyler Seidman is also a capable outside shooter averaging just over 39 percent from the field.

The shooting threats that Rochester has means the Bombers will not be able to use a triangle-and-two defensive scheme like they did for much of the Springfield game and for parts of the Empire 8 final against Stevens. Bombers Head Coach Jim Mullins said as long as the Yellowjackets have three shooters on the court, they will have to probably go man-to-man on defense.

Mullins said he thinks the Bombers have the right mindset and skill set for a game like this. He said the team’s emphasis on rebounding and defense is especially important now that it is coupled with a proven ability to play in hostile environments. Mullins said he credits his veterans for thriving in a hostile environment last weekend and said that experience will be valuable this weekend.

“I think in the second half we did as good of a job maintaining our composure under adverse circumstances as we have all year,” Mullins said. “We, I would say very briefly, were on the verge of losing our composure, and we regained it very quickly.”

The Bombers average three more rebounds per game, but Rochester has a better rebounding margin by just over half a rebound. The biggest challenge defensively for the Bombers is forcing turnovers from a team that is just outside the top 10 nationally in turnovers per game.

A win in this weekend’s game would put the Blue and Gold just three wins away from a national championship. Maravich said the team is not only up for the challenge against U of R but for a deep tournament run.

“It’s just exciting being in the big dance like that,” Maravich said. “To win a game is cool, we really got to win it. We got the potential to play our game, play defense and come out hot every game. We could actually win the whole thing. It’s exciting.”