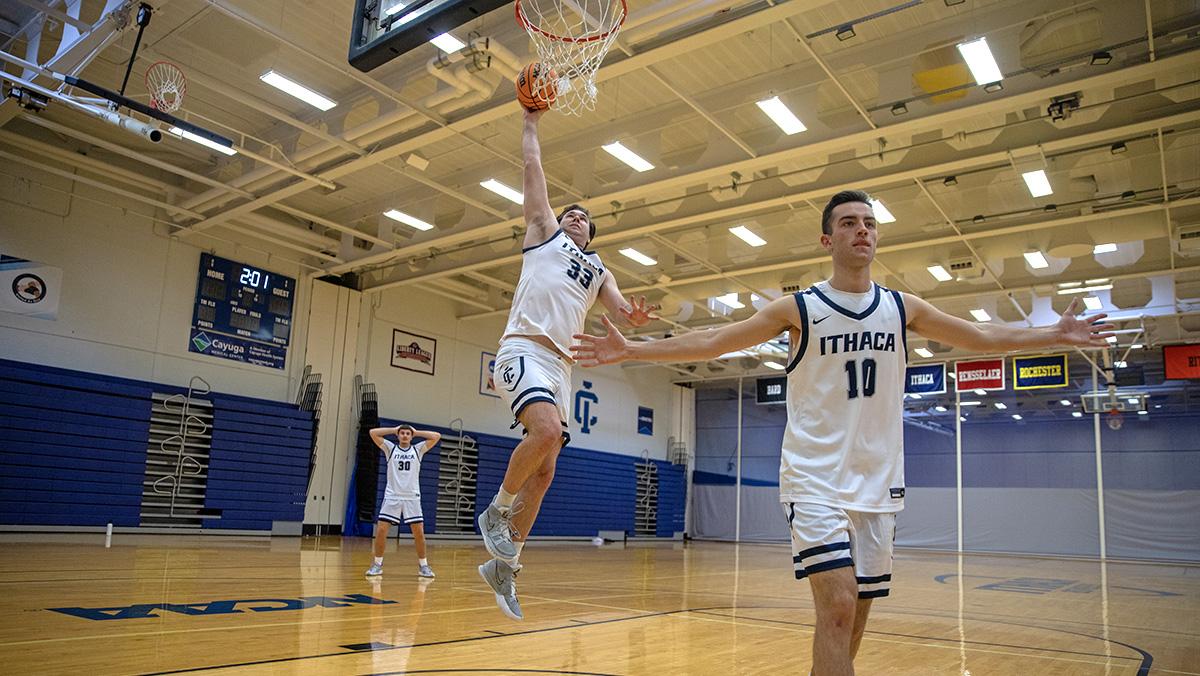 The Ithaca College men’s basketball team is back on the court with a veteran squad that has its sights set on a Liberty League title.

The Bombers are coming off the 2022–23 season in which they finished second in the Liberty League with a 17–9 overall record. Despite the team’s solid regular season performance, the campaign came to a close Feb. 26 in a 76–74 loss to Vassar College in the semifinals of the Liberty League Championships.

The South Hill squad is returning with a strong group of upperclassmen that will look to help the team get back to the postseason.

Among the upperclassmen are captains graduate student guards Skylar Sinon, George Sikoryak III, and Zach Warech and senior guard Liam Spellman. Graduate student forward Luka Radovich is also back on South Hill, following a strong season in which he led the team in points scored, having 343 points on the season. Head coach Waleed Farid is in his second season at the helm of the program and said he is looking forward to seeing what this experienced group can achieve.

“The excitement for this year is really high,” Farid said. “Returning 13 out of 15 guys from last year’s roster allows us to have a lot of continuity from last year to this year, which is giving us the ability to have some higher expectations for the season.”

The Bombers’ returning core has a track record of success as a team, as five members of this year’s squad contributed to the program’s first Liberty League title, which was won during the 2019–20 campaign. Senior forward Jack Stern made his collegiate debut during the historic season and said he believes this team’s upperclassmen will play a pivotal role this winter.

“I think what our veterans bring is that extra experience and that bit of knowledge of how to act, how to carry ourselves [and] what we can do to keep the team morale high,” Stern said. “I think that it’s such a strong characteristic of our team that really allows us to be ourselves but be a successful team at the same time.”

The South Hill squad’s veterans excelled during the 2021–22 season, as Sinon and Radovich earned All-Liberty League honors. Radovich netted the second-most points per game in the conference, recording an average of 16.3 points per contest. Radovich said he believes the team’s postseason resume has the group poised for success this year.

“It’s just huge to have that experience knowing what it feels like to be [in the NCAA Tournament],” Radovich said. “Especially just for teaching the young guys the ropes [and] making sure they’re mentally ready for the long season.”

While the Bombers will look to its veterans to make an impact, Farid said he has also been impressed by the team’s underclassmen early on. The head coach said he feels he can rely on each player on the roster to contribute, and he is particularly looking forward to seeing junior guard Noah Downing and sophomore guards Logan Wendell and Aidan Holmes take the court.

“Our depth of talent, that is our number one strength,” Farid said. “We have guys, one through 17, right now who I think can play in the game, which makes my job kind of tough, but it’s a good problem to have.”

While Farid is excited about the team’s underclassmen, Farid said Sinon is among the leaders that the Bombers will look to this winter. The guard will seek to build off a solid senior campaign in which he scored the second-most points on the squad, averaging 12.2 points per game. Sinon etched his name into the Bombers’ record books last season, becoming the 29th player in program history to score 1,000 career points in the team’s 106–95 victory against the Rochester Institute of Technology on Feb. 15.

Spellman is another impactful performer that is coming back, ranking sixth in the league for three-point field goals per game last winter. He knocked down a total of 49 buckets from behind the arc in his junior season.

These offensive standouts helped lead the squad to being the most productive scoring team in the Liberty League, averaging a total of 80.8 points per game. On the defensive side of the ball, the team allowed 72.7 points per game but ranked third in the league with 28.5 defensive rebounds per contest. Spellman said the team will rely on its offensive abilities this year, but it will also look to be a force defensively.

“We have a lot of skilled guys offensively,” Spellman said. “We like to run and gun; we like to shoot threes and just play fast. And then in terms of defense, I think we can only get better. We had a good defensive team last year, but we can always improve in that area. ”

The team began official practices Oct. 15 following preseason workouts in which athletes lifted weights and played pickup games multiple times per week, Radovich said. Stern said he was impressed with the team’s preparation before the start of the season.

“I can tell that all the guys are fully bought into what we’re doing this year and the system that we’ve got in place,” Stern said. “It just feels like everyone knows what we want to get done [and] knows what we have to get done as a team.”

Along with the team’s preseason training, it has also held weekly meetings to discuss the upcoming campaign, Radovich said. He said the team has worked to build team culture during these meetings, bringing in Greg Shelley, director of the Ithaca College Leadership Academy and retired associate professor, to speak to the group. Farid said he believes these meetings have been important in building team chemistry prior to the season.

“We’ve just been trying to get everybody on the same page,” Farid said. “Understanding that everybody’s got a role to play and everyone is doing their best for the best of the program. … It’s been great because everyone’s had a voice in these conversations.”

Stern said he believes that the group’s camaraderie will play an important role in its success this season.

“I think our chemistry is our biggest strength,” Stern said. “I think that a lot of us, having experience with each other [and] being around each other for the past [three or four years], has really given us the opportunity to not only learn who we are on the court but also off the court. … That allows us to better communicate on the floor [and] better react to the emotions of our teammates.”

The South Hill squad’s season began Nov. 8 with a rivalry matchup against SUNY Cortland at Ben Light Gymnasium. Farid said his ultimate goal for the team is to give a strong effort each time it steps on the court, and he believes this will set the team up for success.

“I want to see this team go out and compete every day,” Farid said. “[I want the team to] put ourselves in [a] position to win every game. … I think we have enough talent to be fighting for the top spot in the Liberty League.”