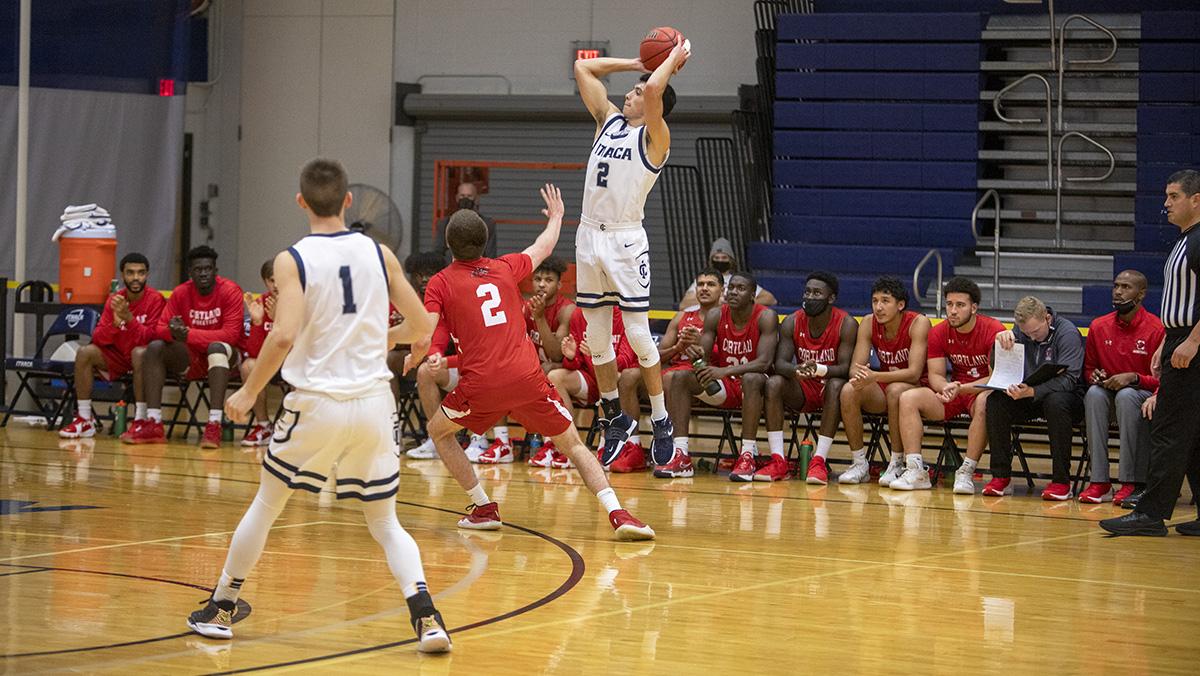 Senior Skylar Sinon, guard for the Ithaca College men’s basketball team, has made history by becoming the 29th player in program history to score 1,000 career points.

The guard reached the mark in the Bombers’ 106–95 victory against the Rochester Institute of Technology on Feb. 15 in Clarkson Gymnasium. Sinon secured the milestone by knocking down a jump shot, giving the South Hill Squad a 93–82 lead with 6:29 remaining in the contest.  Senior Sebastian Alderete, current student assistant coach, was the last player in the program to join this exclusive club Jan. 24, 2020.

“It’s obviously an amazing honor to be mentioned with those other 28 members of the 1,000 point club,” Sinon said. “Luckily I’ve played with amazing guys throughout my three years here, so they let me do what I can do. They let me score, they trust me with the ball. So, it all starts with them.”

Sinon also attributed his success to the trust his three collegiate coaches have given him, playing for Jim Mullins, Sean Burton and Waleed Farid during his time on South Hill. Farid said that he was glad to see Sinon’s dedication to the sport pay off by reaching the career mark.

“I’m happy for him,” Farid said. “He’s obviously one of our leaders, one of our best players and it’s always exciting to see a player hit some of those career milestones that validate the amount of work they put in and the commitment to getting better every day and every year.”

This is the second time Sinon has reached the 1,000 point mark, as he also achieved the milestone during his junior year at Byram Hills High School. During his collegiate career, Sinon reached the milestone in just three collegiate seasons because his junior campaign was canceled as a result of the COVID-19 pandemic. Sinon said he enjoyed the process of achieving this mark and takes pride in joining the exclusive group.

“I think [reaching 1,000 points has] dubbed me as a scorer here at Ithaca, which is pretty cool,” Sinon said. “It’s a great honor and I had fun doing it, I promise you that.”

He is also the second student to score their 1,000th point this season, reaching the milestone a month after Grace Cannon, women’s basketball graduate student, achieved the feat in the team’s 67–44 win against Clarkson University on Jan. 15.

Sinon’s career point total currently sits at 1,019 as the team enters postseason play with its first game of the Liberty League Championships set for Feb. 26. The guard was a key contributor to the Bombers’ success this winter, helping lead the squad to a 17–8 record and a second-place finish during the regular season.

Sinon has averaged 12.2 points per game this winter, a decrease from his sophomore year in which he posted an average of 16.3 points per contest. He said his role has shifted slightly this winter compared to the past, as a result of the team having multiple impactful players offensively.

“This year has been a little different too because we have such amazing players on our team that can score the ball,” Sinon said. “So I’ve been doing a little less scoring this year, a little more facilitating between our team and kind of just doing whatever the team needs me to do, and whatever role I have to play in order for us to win. … But it’s still been pretty consistent to get me to that 1,000 point mark, which is pretty cool.”

Farid said Sinon’s ability to make an impact on both sides of the ball adds to how special the milestone is, especially because he achieved it in just three seasons.

“Skylar has a really unique game, he attacks the game in so many ways, not just scoring,” Farid said. “But being able to do it in three years is definitely a huge accomplishment. It’s a testament to how good of a player he’s been [and] it’s a testament to how important to the program he’s been since the day he stepped foot on campus.”