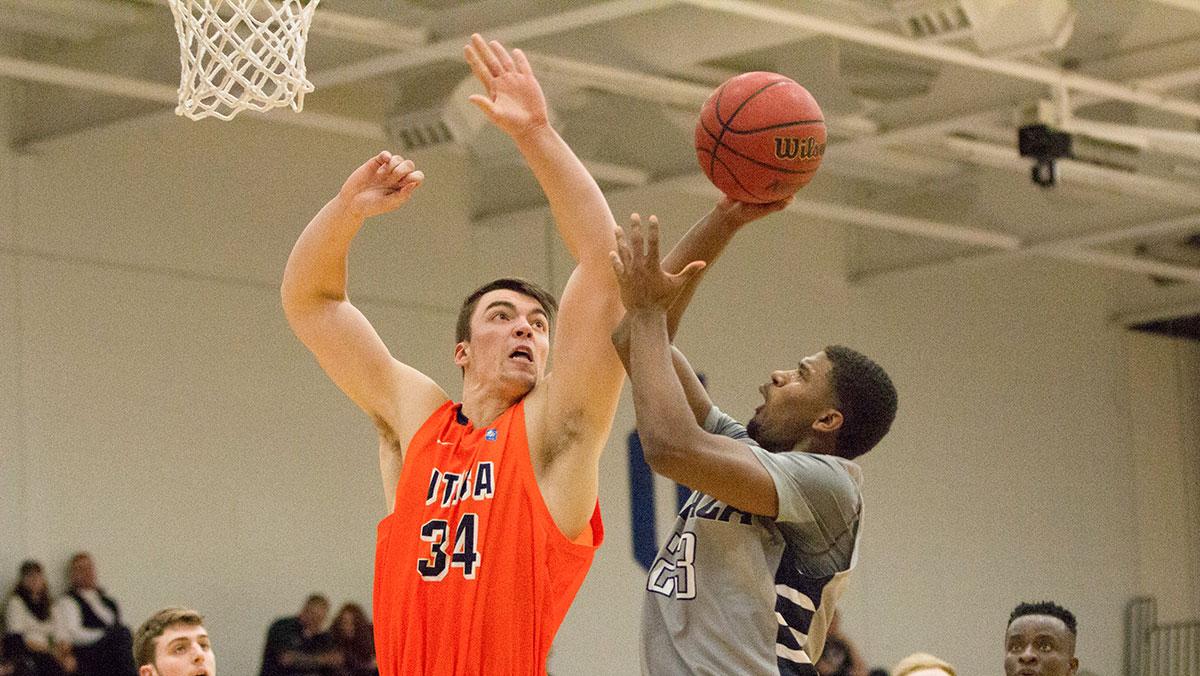 The men’s basketball team knew going into its Feb. 19 conference matchup with Utica College that a loss would set back the Bombers’ chances of securing the final playoff spot in the Empire 8 Conference Championships.

The team’s worst fears came true when the 6–16 Pioneers came into Ben Light Gymnasium and defeated the 13–10 Bombers 84–75 in regulation.

“We just didn’t have enough urgency,” junior guard Carlin Champion said following the loss.  “We put our heads down trying to make a comeback, and that’s not what you can do when you’re trying to beat any college basketball team.”

“Everyone on our roster always gives it their all,” Bevan said. “Poor shooting numbers and too many mental mistakes lost us the game.”

After a Pioneers’ basket, the two teams traded baskets for the remainder of the half until Pioneers freshman guard Seamus McHugh drove to the hole for a hard layup that forced the Bombers to go into halftime down 38–37.

Things got worse for the Bombers when sophomore guard Carroll Rich, went in for another two handed dunk — like he did against Houghton College — but was stuffed and forced to go the free throw line. Despite Rich making the free throws, the momentum on the court for the Bombers was drained from the missed dunk.

With five minutes to go in the game, the Bombers missed key shots and were down by 10 points.

The Bombers were able to cut the Pioneers lead to six with fewer than three minutes to go, but it was too little too late. With the Pioneers in the double-bonus, the Bombers gambled, consistently fouling the Pioneers to take their chances at the free throw line. After sophomore guard Marc Chasin missed a 3-pointer at the end of the game, the Bombers nine-point defeat was secured.

Flanagan said there are small things the team needs to improve on in order to make the playoffs.

“We got to play defense and rebound,” he said. “We couldn’t front the post today, and we let them get into the paint too easily.”

Despite the Bombers losing to the Pioneers, their playoff chances are still alive after Stevens Institute of Technology lost to Nazareth College 90–65. A Bombers win and a Stevens loss Feb. 20 will put the Bombers into the playoffs.

Flanagan said the Bombers must move on from this lost and focus on their game tomorrow.

“It’s a tough loss, but we need to play for our senior Sam Bevan,” he said. “We need to put the past in the past because nothing is going to change it now.”

The Bombers will try to make that final push for a playoff spot on senior day, at 2. p.m. Feb. 20 in Ben Light Gymnasium when they face off against Hartwick College.

Champion said the team will be ready to play well against Hartwick College.

“We got to come out and battle,” he said.  “We beat Hartwick once we can do it again.”