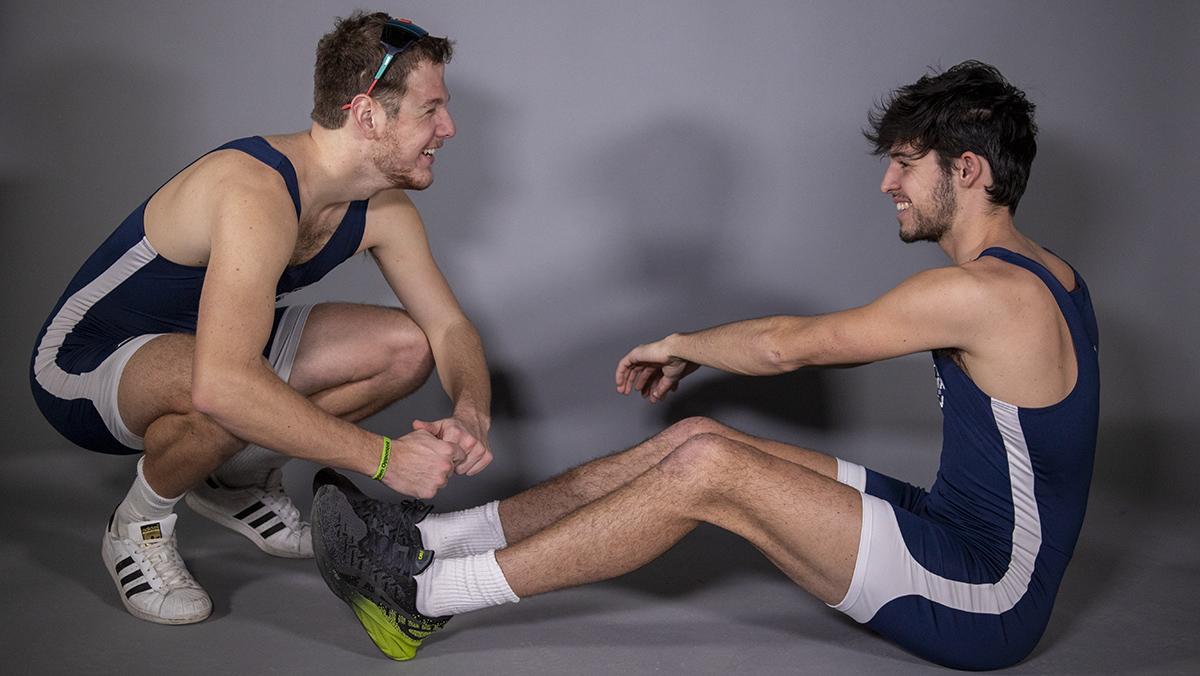 Nolan Saunders/The Ithacan
From left, junior Jake Lentz and senior Sam Bickham of the Ithaca College men's crew team. The team will face tough competition in the Liberty League this year and hope to improve upon a second-place finish in 2021.
By Dean Gutic — Staff Writer
Published: March 3, 2022

With the 2022 spring season approaching, the Ithaca College men’s crew team is gearing up for a return in April as it looks to reach its goals for the year.

The team saw some success in the 2020–21 season, finishing with a 2–2 record in a shortened season due to the COVID-19 pandemic. It also finished second behind Hobart College at the Liberty League Championships. But the team graduated eight athletes, including two in the varsity–eight boat.

“One of our main goals is to be as competitive as we can and to race with two competitive eights, but in order to do that we need depth beyond that,” Robinson said. “In 2019, we had a bunch of success. Fast forward to last spring, we didn’t do too great and a few years before that we had trouble with the second eight. Now with this season, we have our two eights, so our goal is to be competitive.”

With the National Invitational Rowing Championships (NIRC) back this season and COVID-19 restrictions being relaxed as the year moves along, the team looks forward to facing opponents it has not faced since Spring 2019.

“Our biggest competition is our rivals [Rochester Institute of Technology] and Hamilton College. Every time we race them, if we beat them, we feel like it makes it a successful season,” Robinson said. “Another team we look forward to is Hobart … Schools such as Williams, Trinity, Bates College and Tufts are outstanding and if we can beat any of those teams, we’d be doing really well.”

To help get ready for competition, Robinson is helping his crew prepare for a big season. Junior Jake Lentz said Robinson has pushed the team to work harder through workouts and training.

“Coach Robinson is turning up the intensity of our training on the [rowing machine] erg and is also improving our form in pool stations,” Lentz said. “He has us working hard at a high intensity.”

Besides Robinson pushing the rowers to work harder, Lentz mentioned how Robinson has been preparing the team and the team culture within the men’s crew team. Lentz said Robinson is enforcing the importance of team interactions and mental health.

Senior Sam Bickham is returning this spring for what will be his last season as a rower for Ithaca College. However, despite being a senior member of the crew team, he said he will not be changing his approach for this season.

“My goal for this season is to get a personal best on the [rowing machine in the 2K and be the stroke for the varsity eight] in the spring and to win states and make finals in the NIRC,” Bickham said. “In 2020, our season was put to a halt due to the ongoing COVID pandemic and in 2021 we weren’t able to travel up north for the NIRC … We are pushing as a team to do whatever it takes to reach our goals.”

With the spring season approaching, Robinson said he expects his team to step up to the challenge this year. Although the sport is team-oriented and it can be hard to highlight specific individuals, Robinson praised the captains of the team.

“Our two main captains are fifth-year senior Steven Van Hoof and junior Jake Lentz,” Robinson said. “They’ve been doing a great job as leaders. They are both vocal leaders, they motivate the team and they set great examples.”

According to Robinson, a big part of the competitive eights for this season are going to be the six returning varsity rowers from last season. But he added that there are more rowers to watch out for than just the returning upperclassmen.

“We have three good freshmen, even though it’s still new for them, that should all make the second eight,” Robinson said. “We also have one athlete who’s never done crew before, he’s in great shape and can really shake things up.”

With so many new faces, Robinson said many of the spots for the second varsity eight are still open. He does not know yet who will step–up to fit into those roles.

“Everyone has a shot at making the second eight,” Robinson said. “And I have a feeling there will be someone that is going to surprise us by developing in a short period of time.”

With the season still almost a month away, Lentz said the whole team is ready to compete and is excited to see how the season goes.

“We have a strong freshman and senior class that is motivated to work,” Lentz said. “We are excited for the season and we are ready to attack.”

The Bombers will open up their spring season at home April 2 as they take part in the Cayuga Duels on the Cayuga Inlet.