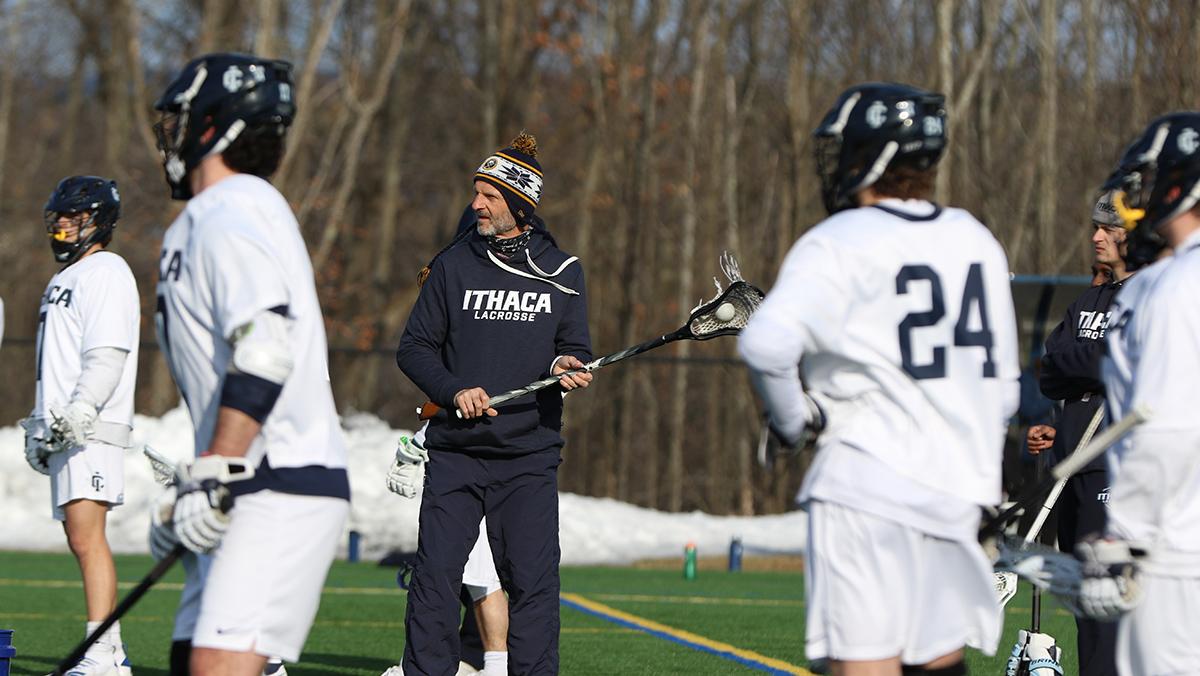 Jeff Long, Ithaca College men’s lacrosse head coach, reached his 350th career win with a 18–10 victory over Birmingham-Southern College on March 15. This dominance has been present for the team during the beginning of the season, starting the Spring 2022 campaign off strong with an 8–1 record.

Long’s 350th win adds to his list of accolades that include being the Bombers’ all-time leader in coaching wins, six Empire 8 Coach of the Year awards and inductions into the National Lacrosse Hall of Fame and the Ithaca College Athletic Hall of Fame. In 34 seasons with Long as head coach, the Bombers have had 25 winning seasons, with nine of them coming in the last 11 years.

“You don’t really pay that close attention to those numbers,” Long said. “I really didn’t have an idea until the assistant coach mentioned something … and I saw it on Facebook that night.”

Graduate student midfielder Connor Brumfield has played under Long for five years and said the coach’s guidance has aided in his success on the field. Brumfield has been awarded the 2018 Liberty League Rookie of the Year award and has been named to the All-Liberty League Second-Team three times.

“Anybody that plays under [Long] knows that he’s probably one of the best lacrosse minds to play under,” Brumfield said. “His wealth of knowledge for the game is pretty much unmatched to anybody that I’ve talked to.”

Long has several decades of lacrosse experience as a player and coach, which has led to his success. Long played lacrosse at the U.S. Naval Academy, where he was a three-time All-American. He still holds the program record for 233 career points, 149 assists and 53 assists in a single season. Long’s first coaching job was with his alma mater, where he worked with the “B” team and preparatory school unit. After his time at the U.S. Naval Academy, he coached at Norfolk Academy, Alfred University, Washington and Lee University, and the University of Virginia before coming to Ithaca College in 1988.

In his 35th season on South Hill, Long and the team’s success has continued as it has started the Spring 2022 season with an 8–1 record. Its only loss was a 20–12 defeat to St. John Fisher College on Feb. 26, which is currently 6–1. Long said the team’s success this season can be attributed to its experience.

“This is probably one of the biggest senior classes we’ve ever had,” Long said. “To me that says something about this class … I’m really tough on them the first few years and it really becomes their team and their legacy … How good your team is, is only how good your seniors are.”

Junior attackman Jake Erickson, who is tied for the team lead in goals this season with 25, said he is impressed by the level of talent on this team. He said the group isn’t relying on one or two athletes to make plays, as the whole offense and defense are doing a good job of what they call “raising the temperature,” which means playing aggressively and putting pressure on the opponent.

“He doesn’t settle for anything less than what he expects your best to be,” Brumfield said. “It’s a big part of why he’s been very successful as a coach … the stuff he says resonates pretty well with me and I like the style of coaching.”

Sophomore attackman John Sramac, 2021 Liberty League Rookie of the Year, who also has 25 goals since the season began Feb. 23, said he credits a lot of his success to Long’s coaching.

“He does a really good job of challenging me and pushing me to get outside of my comfort zone and grow as a player,” Sramac said. “He’s always trying to expand your knowledge of the game and how you view certain situations … I just try to be a sponge.”

While Long has high expectations for his team, he also knows when to be light-hearted. Erickson said Long’s demeanor as a coach resonates with the team.

“He’s a really funny guy,” Erickson said. “It’s hard for me not to come out of practice laughing.”

The season is far from over with seven more regular-season games left to play and the team is currently in third place in the Liberty League. Even though the group has started strong, Long said he believes there’s room for improvement.

“Right now I don’t think we’re playing our best lacrosse,” Long said. “We’re getting there … I see us at like 80% of our potential right now. We still have another 20% to build through the next few weeks.”