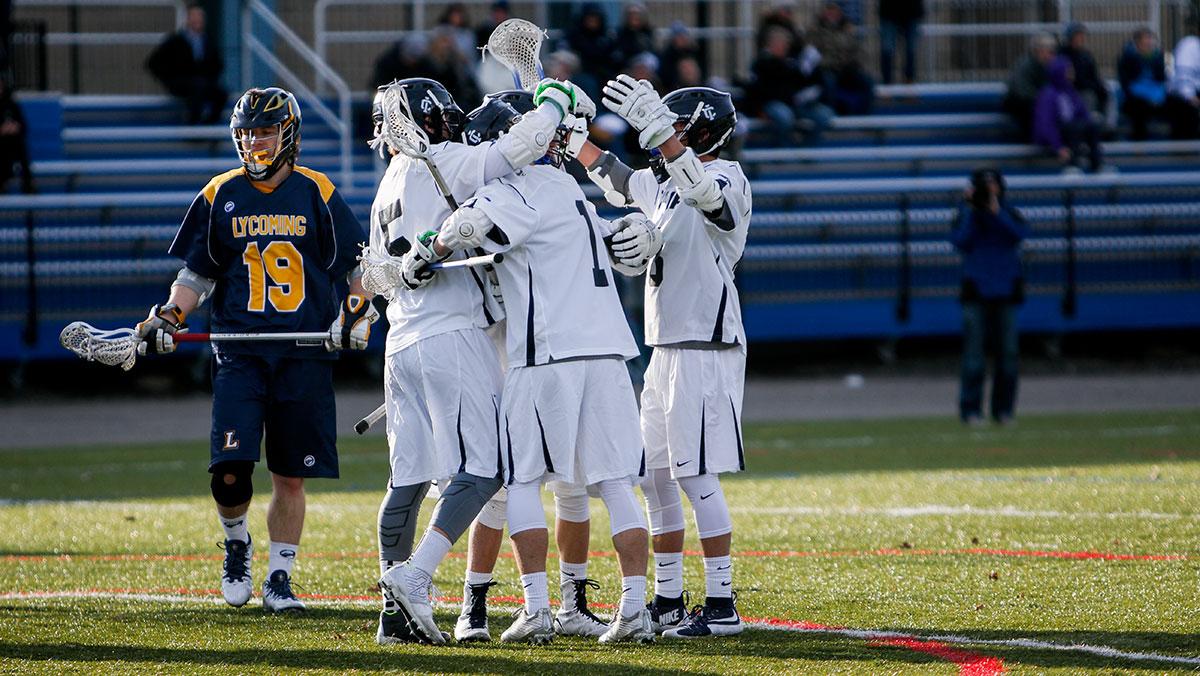 SAM FULLER/THE ITHACAN
The men's lacrosse team celebrates during its game against Lycoming College on March 1 in Higgins Stadium.
By Cal Dymowski — Staff Writer
Published: May 3, 2016

Despite the fact that the Ithaca College men’s lacrosse team, which is currently ranked first in the nation, has had a historic season, winning 16 of its 17 games, the loss to Rensselaer Polytechnic Institute on March 5 lingers in the back of the players’ minds as they head into the Empire 8 Championship.

Junior attackman Jack Shumway, who has 42 goals and 12 assists on the year, said the Bombers are using their only loss on the season as motivation.

“I think the best thing that happened to us in our season was getting an early loss against an RPI team that kind of snuck up on us,” Shumway said. “It was a mental awakening.”

Shumway said that since that loss, the Bombers’ locker room has preached the fact that the Bombers shouldn’t “tip-toe” around any teams or take them lightly, and their goal is to win the Empire 8 tournament to avoid a bid into the NCAA.

“You could look at it and say, ‘Oh, we are No. 2 in the country,’ but for us, that means nothing,” Shumway said. “The only thing that is important is getting the automatic qualifier in the Empire 8 championship.”

Shumway said despite the early loss to RPI, he believes the biggest challenge this season is still to come.

“The biggest challenge is to stay mentally prepared, as well as to be physically healthy,” Shumway said. “And reiterate what our team goals were, and making new ones every day.”

The Blue and Gold captured the Empire 8 crown April 27 when they defeated the Elmira Soaring Eagles. The Bombers will now host the Empire 8 tournament, which takes place May 4 and 7.

Shumway said the team this year, regardless of class, brings a different level of experience with it into the Empire 8 playoffs, and possibly the NCAA tournament but that the team still knows what it is truly all about.

“It’s a one-and-done mentality,” Shumway said. “Everything is on the line every game.”

Shumway said if the team can play “Bomber lacrosse,” it is confident it can take on any opponent.

“We bring our game, we play the best we can play, we feel confident in our ability to take on any team,” he said.

The Bombers host St. John Fisher in the semifinal game at 4 p.m. May 4 in Higgins Stadium.