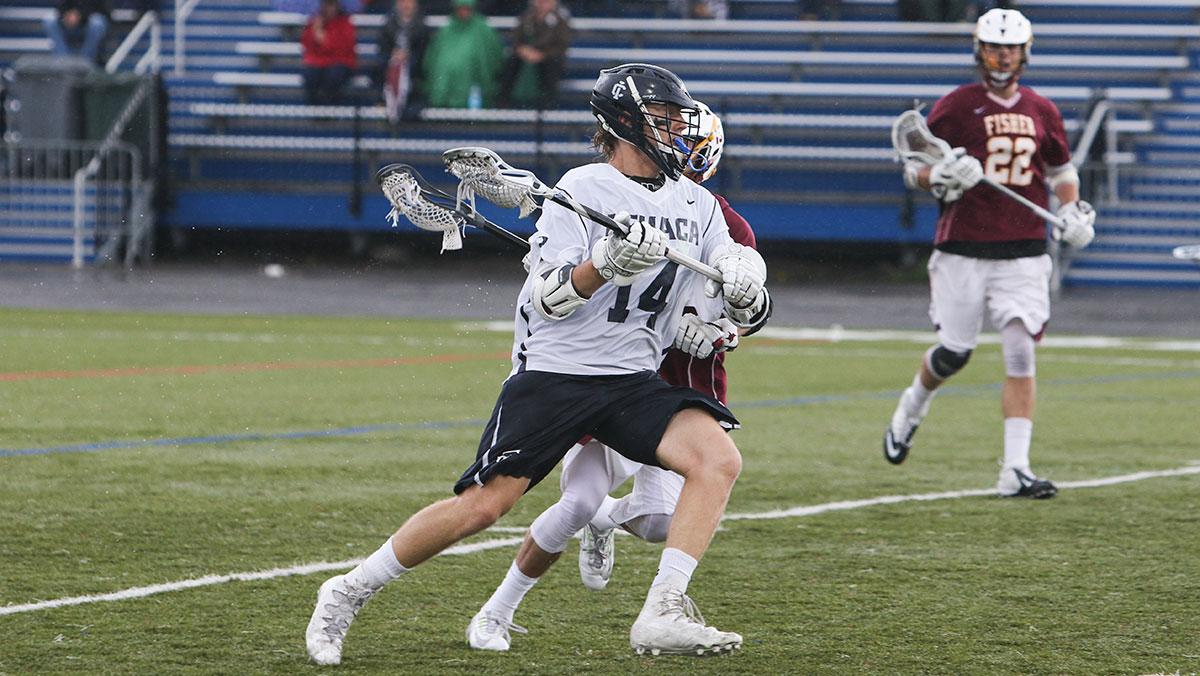 The No. 1 nationally-ranked Ithaca College men’s lacrosse team won its 15th consecutive game in a 17–6 victory over St. John Fisher College in the Empire 8 Conference semifinals May 4 in Higgins Stadium.

The Bombers dominated the first half. The first quarter began slowly as both teams were adapting to the rainy conditions on South Hill. The game was scoreless for the first six minutes and 24 seconds until junior attackman Jack Shumway took a pass from sophomore defenseman Keith Morrissey for the first goal of the game. The only other goal scored in the quarter came off the stick of sophomore midfielder Greg Drillock to give the Bombers the 2–0 lead at the end of the first 15 minutes.

The South Hill squad came to life in the second quarter, scoring seven goals in a row before the Cardinals scored their first goal of the game. Sophomore attackman Jake Cotton and freshman midfielder Conner Crosson led the way with two goals each in the quarter, along with one goal each from freshman midfielder Josh Della Puca and junior attackman John Januszkiewicz and sophomore midfielder Stephen Morrell.

The Cardinals got on the board at the end of the second quarter when senior attackman Gary Bova scored on a fast break.

The Blue and Gold continued its lead in the third quarter, outscoring the Cardinals 4–2. Sophomore attackman Andrew Rosso of St. John Fisher launched the second-half action with two goals to cut the lead to six. The Bombers responded with four goals in a row, two each from Shumway and Cotton.

The fourth quarter was more of the same as Shumway netted two quick goals at the beginning of the quarter, followed by a goal by Januszkiewicz. Sophomore midfielder Jarett Duchesneau and junior midfielder Dante Giordano scored two goals for the Cardinals, but it was not enough, as Crosson scored again for the Bombers. Freshman attackman Alex Hunt finished off the game with a goal for St. John Fisher to cap off the 17–6 game.

St. John Fisher coach John C. Johnson said his team was not able to keep up with the play of the Bombers after the first quarter.

“We knew we would have to control possession to have a chance in this game, but they’re a very well-coached team with a lot of really talented kids, and we weren’t able to hang with them,” Johnson said.

Despite the win, Bombers head coach Jeff Long was not particularly pleased with his team’s performance.

“We weren’t happy with how we played today. We have some stuff to work on before Saturday,” Long said. “I thought we were a little sloppy, and the speed of play wasn’t where I wanted it to be.”

Senior Scott Sidnam got the start and the win between the pipes in this game as he recorded six saves with three goals allowed. He was replaced by junior Jack Deragon for the final seven minutes and 42 seconds of the game.

Shumway and Cotton each had seven points on the day, with Cotton tallying four goals and three assists and Shumway five goals and two assists. Cotton said he owes his performance to the successes of his teammates.

“I had a lot of good scoring opportunities in transition that were created for me by my teammates, and they were able to score when I got them the ball,” Cotton said.

The Bombers will take on Stevens Institute of Technology for the Empire 8 Championship at 4:30 p.m. May 7 in Higgins Stadium. Even though they bested the Ducks 17–7 in the regular season, Long described their upcoming game as much more of a challenge.

“It’s gonna be a war,” Long said. “They’ll be coming in pissed off because of how we beat them last time, and it won’t be like that this time. We’re going to need to play good lacrosse for 60 minutes.”