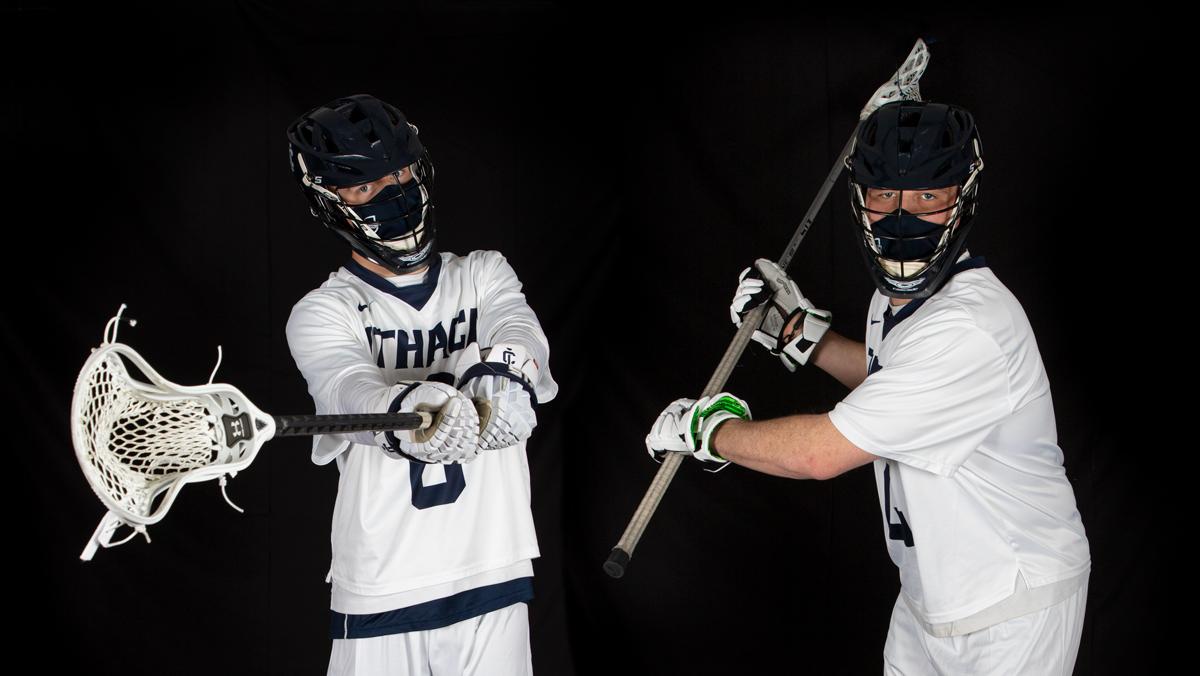 After an abbreviated season with some promising games in 2020, the Ithaca College men’s lacrosse team will look to establish themselves as a threat in the Liberty League.

The Bombers went 2–3 last season with wins over Lycoming College and Cabrini University. The victory against Cabrini, the 2019 national champions, was the first win against a top five ranked opponent since 2016. Head coach Jeff Long is looking for his sophomores and seniors to make a jump and thinks his team can surprise people this year.

“[The ceiling] is really high and ever-growing,” Long said. “A lot of it has to do with how quickly we mature around all age brackets and positions.”

Senior Jake Hall-Goldman, who was named a United States Intercollegiate Lacrosse Association (USILA) preseason All-American, is one of eight returning seniors. Long said that instead of establishing two captains, he has been rotating the senior class during practices, letting them lead stretches and drills.

“As we’ve come back, we’re in two very specific pods, and we’ve got seniors in both of those,” Long said. “We break them into positional pods, and we have seniors in both of those as well. We don’t have a [captain] system like we did last year right now. We’ll probably get that once we get into some game activity. Right now, the seniors are just splitting everything up.”

Though he was excited when he was first named a preseason All-American, Hall-Goldman is not satisfied. Instead, he said his goals are to be named an All-American at the end of the season and to be a part of the best defense in the country. Hall-Goldman set the bar high for himself and the team, but he still believes that those expectations can be met.

“I think that we can make a run in the Liberty League and we can beat anyone,” Hall-Goldman said. “I think everyone is just excited to be here, too. After getting cut short last year and taking almost 10 months off lacrosse without the team, everyone’s excited to be back and chomping at the bit to play a different team.”

Hall-Goldman said he noticed that the offense is moving the ball extremely fast, partially due to sophomore Jake Erickson making the switch from midfielder to attackman. Erickson started two games last season and was named to Inside Lacrosse’s Division III All-Freshman team, but Long moved the sophomore to facilitate the offense from behind the opponent’s net. With Erickson working on becoming a better scoring threat, it is opening up more opportunities for his teammates, adding another element to an already dangerous offense.

“I think this year, we’re acting more as a whole group rather than just a bunch of individuals out there,” Erickson said. “We’re all playing unselfishly, we’re all playing fast, and I think that if we continue to kind of push each other and compete and practice every day, we’re going to be a tough team to beat.”

The team lost some key contributing seniors from last season, but Long said this year’s freshman class may be one of the best in recent history. The program brought in freshmen defenders Hunter Wallace and Jack DiRocco, freshman goalkeeper Charlie Paras, freshmen midfielders Benjamin Ohler and Kyle Savery, and freshman attackman John Sramac to be immediate contributors for the team. Long said he has been impressed by the newcomers. In a 10-game season, they will be essential to the team’s success this year.

“Our schedule is probably going to be one of the most intense we’ve ever had with the shortened amount of games,” Long said. “When you’re playing really good teams, the top guys neutralize each other, but you win a lot of games with your next level guys and the next man up. The third attackman, the second midfielder, the backup defender, you win a lot of games with those guys. There’s going to be a lot more people and a lot more roles this year.”

The Liberty League is a strong conference for men’s lacrosse with five teams getting votes in the USILA preseason poll, including the Bombers. With Rochester Institute of Technology (RIT), Union College and St. Lawrence University ranking inside the top 20, and Rensselaer Polytechnic Institute and Ithaca College receiving votes as well, competition will be stiff this season, especially since the Bombers would have to win the conference in order to make the NCAA tournament. Hall-Goldman said that the team is ready for the challenge and that he thinks the team is looking forward to embracing the grind of the upcoming season.

“You always like to play [RIT], and Union is going to be a great game too,” Hall-Goldman said. “Everyone in the Liberty League is really solid, so I guess every game is a big game for us this year.”

Long said he does not want his team thinking ahead, so they have adopted a mantra to follow for the rest of the season. He makes his team take a day-by-day approach since the players arrived on campus in January, and Erickson said it has worked to help the team be able to adjust on the fly.

“As we’ve learned, anything can happen at any point,” Erickson said. “The more prepared we are for the unexpected, I think we’re going to be able to adapt and get through it.”