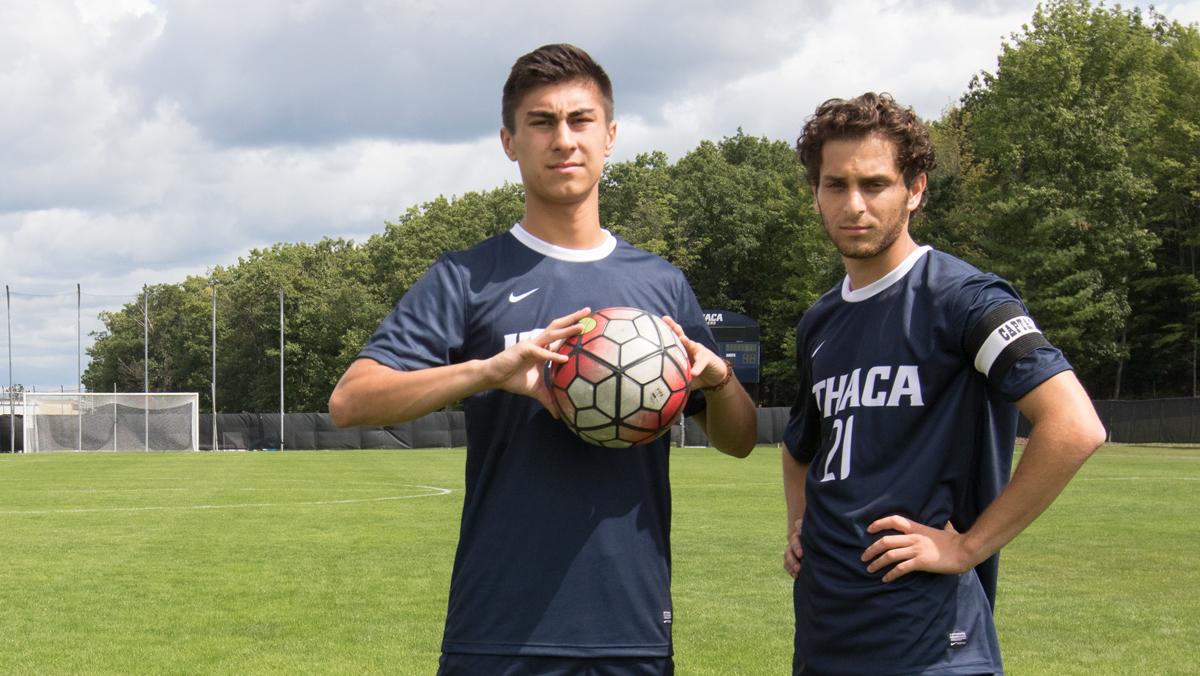 Despite a new league and a new head coach, the men’s soccer team is relishing the underdog role they have as they enter the Liberty League.

Head coach Kyle Dezotell, hired June 1, had 12 consecutive winning seasons as head coach of Manhattanville College and Norwich University, and wants to bring the success he had to Ithaca College. He said he is not looking to make drastic changes to the program but is focused on making the Bombers a winning team.

“I’m a big believer in culture and in having the right people,” Dezotell said. “I think to be successful, you need to surround yourself with winners. Winning breeds winning.”

Junior defender and captain Sam Factor said the arrival of Dezotell, along with being the new team in the Liberty League, brings excitement about this season’s challenges.

“We’ve got a lot of people to prove wrong in this conference,” Factor said. “It’s a step up from the Empire 8, and we’re all really motivated.”

The 2016 season ended in frustration for the Bombers as the 7–9–1 team fell in the Empire 8 semifinals to Houghton College 2–1, a game sophomore midfielder Justinian Michaels uses for motivation. It fueled the team to work harder during the off–season and gave a mindset to work even harder to capture the title, Michaels said.

The Bombers will look to Factor and Michaels to lead the defensive unit now that second-team Andrew Coburn ‘16, All–Empire 8 center back, has graduated, while senior goalkeeper Dan Hinckley will take over for Zach Jacobsen ’16, who also snagged second–team All–Empire 8 honors.

The central midfield role of last season’s captain Scott Halpern, who was fifth on the team with six points, will now fall to junior midfielder Zachary Lichtman.

The loss of Sam Boylan ’16, a second–team All–Empire 8 selection, who led the team with 16 points and six assists, will force the Bombers to strive harder for production on the offensive end.

In addition, the team will also be short on senior players as Hinckley, along with captains Justin Pintak and Eric Hepler, will try and set the tone for the new look of the program.

But despite the switch–up in key positions, Michaels said a clean slate represents an exciting overhaul of the program.

“Going in with a new team, a new head coach, it sets that new standard,” Michaels said. “We get that new chance to become a top team in this league. And we’re going up against teams that are nationally ranked, so it gives us that motivation of the underdog spirit.”

Dezotell said he’s eager for the test despite the difficulties the Liberty League brings.

“It’s exciting more than daunting,” Dezotell said. “These are the types of programs that I want to be associated with as a coach and as a competitor. I’ve never been a coach to be afraid of any team.”

Boylan’s exit means all hands are on deck, but Factor is confident in the team’s offensive firepower. Their key players include Jose Contreras, Alexi Brosnihan, Kevin Turi and Max Barish.

The Blue and Gold must also be wary of their defensive struggles as well. Last year’s squad surrendered 15 of their 25 goals conceded in the first half, a statistic Factor said can be solved with confidence and by starting games focused.

“It’s something that I’m going to take personally,” Factor said. “As a captain, it’s getting people ready for the game right from the kickoff, and if we get it right, we’ll be more competitive.”