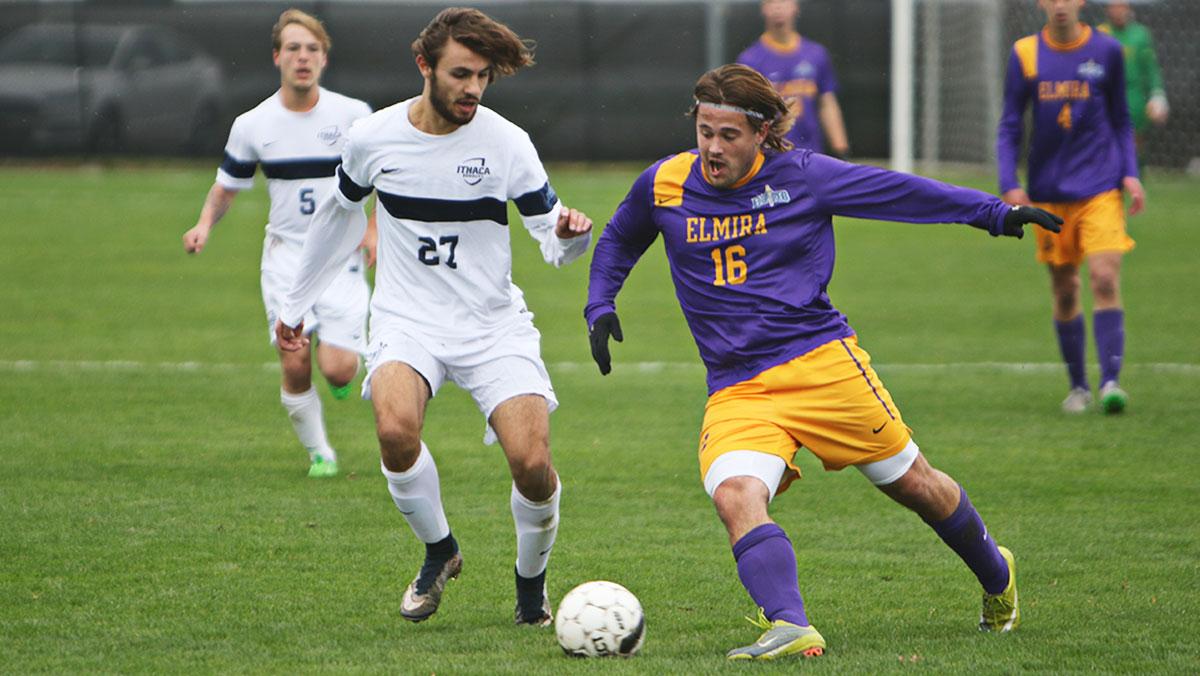 After an impressive 2–0–1 road trip, the men’s soccer team returned to Carp Wood Field on Oct. 24 for a Senior Day showdown with the Elmira College Soaring Eagles.

The Bombers, fighting for a playoff spot on the chilly Saturday afternoon, went with experience to help them out in a thrilling 2–1 overtime victory.

The Blue and Gold got on the board first when senior midfielder Blair Carney was able to connect with senior back Cody Kiss on a cross pass in the box that Kiss booted in to give the Bombers a 1–0 lead in the 18th minute.

Kiss, who was harsh on his play against Elmira, said his goal was huge and that the victory put him and his teammates in a great position to secure a playoff spot.

“The game today was big because it means we have one more game to win,” he said. “If we win, we will host the Empire Championships at home, so that’s what we’re going for.”

The Bombers would not hold the lead for long, however, as Elmira junior Michael Bryant scored after an Elmira corner kick to tie the game three minutes later.

Elmira had a chance to take the lead with five minutes to go in the half when the Soaring Eagles senior Ryan Bertsch had a breakaway. However, senior back Joseph Dobbins was able to catch up with Bertsch to break up the play.

Dobbins also had a chance at a goal a minute later when he received a cross field pass, but the ball soared over the net.

Dobbins said he credits the team’s strong play to its recent stride of confidence against a division opponent.

“The confidence keeps rising with every win we get,” he said. “We tied a very good team last time, but we knew going in that we wanted to put a goal away this time.”

The Bombers went into the half tied with Elmira with eight shots — matching all shots they had in their last game against Skidmore College on Oct. 18.

They finished the game with ten shots on goal in total, while junior goalie Zach Jacobsen saved nine of his own to help keep the Bombers in the game.

Elmira came out swinging in the second half, controlling the tempo of play for the first five minutes of the half.

The Bombers were able to halt the momentum, however, as Kiss made a pass that senior midfielder Brandon Thompson just missed.

After the near miss, the Soaring Eagles continued a back and forth matchup with the Bombers, playing as hard as possible for the four seniors to get them their last home victory.

The best chance of the second half for the Bombers came with 10 minutes to go, when Dobbins booted a free kick that Elmira’s junior goalie Austin Mansell was able to bat over the net.

A scary situation occurred after that play as Elmira’s freshman Aiden Grey slide tackled Thompson from behind, issuing Grey a red card. Thompson remained in the game after being down for several minutes.

The Bombers, who tried to get some momentum after the red card, failed to get a serious scoring chance in the final five minutes forcing the game into overtime. It was the first time the Bombers had played back-to-back overtime games this season.

The extra time started with a near miss as freshman forward Matt Bukowski missed on a header. But minutes later, Thompson challenged Mansell, sneaking one past the goaltender for the thrilling 2–1 overtime win on Senior Day.

Thompson said he wanted to finish the game off quickly because of the weather and was fortunate he was able to provide the winning goal.

“It was overtime — people were tired. People were cold on the sidelines, so I had to finish that game out,” Thompson said. “Thank god the keeper was out of position and the ball just rolled, just a little luck on my side.”

The Bombers are now one win away from securing a spot the Empire 8 playoffs. The team returns to action Oct. 28 in an away non-conference matchup with the Rochester Institute of Technology.