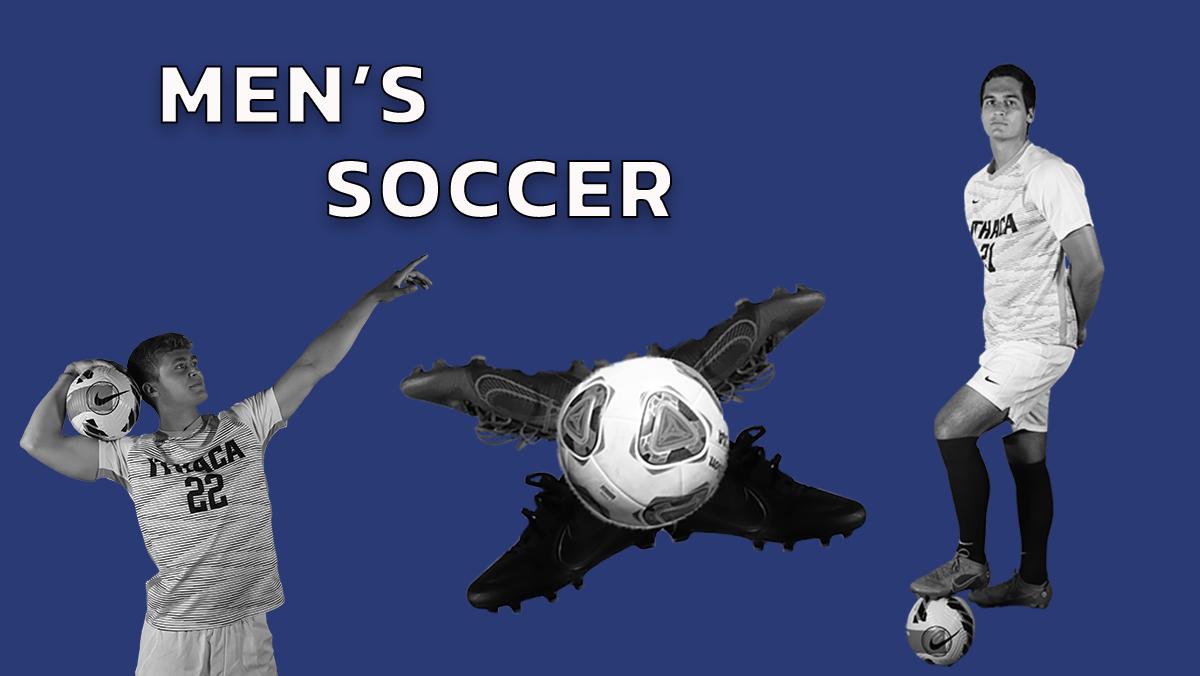 After falling one game short of the Liberty League championship in 2021, the Ithaca College men’s soccer team is back in action and ready to make another push.

Coming back for his second full season at the helm, head coach Garret Eldridge said he is looking forward to the season ahead. Eldridge said every player on the team has the ability to contribute day in and day out, which will help keep the line moving.

“We have a tremendous amount of depth on the team from top to bottom,” Eldridge said. “Everyone can contribute and we are extremely lucky to have that value.”

One of those contributors is senior defenseman and captain Brendan Lebitsch. Lebitsch, who has played in nearly every game since his freshman year, is setting his sights high this season after coming up short of a conference championship in 2021.

“Our biggest goal is to qualify for the NCAA tournament,” Lebitsch said. “My freshman year, we were nationally ranked as high as seventh as we opened up strong. We have to set the tone in the out-of-conference games in order to roll into conference play ready to win and hopefully host the Liberty League playoffs.”

Being named a captain for the 2022 season, Lebitsch has taken on an important role as a leader after following the lead of 16 seniors in 2021.

“I’ve taken on a bigger role this season,” Lebitsch said. “Last year I did not have much of a say with 16 seniors, but this year it’s me and [graduate student midfielder captain Kyle Sicke], and it’s going to be critical for us and the rest of the seniors to come in, set the standard and be that mentor to the incoming freshmen.”

A fifth-year captain, Sicke said he recalls having a large freshman class his first year. Now, Sicke said he is ready to help the freshmen adjust to their new roles and do whatever it takes to bring home a championship in his final season.

“I’ve been lucky enough to have played in some really close and exciting games,” Sicke said. “We have a big incoming class of freshmen this year, just like my freshman year. I’m looking forward to getting to know them and creating a close, tight-knit team chemistry.”

On top of fostering a strong team community, Sicke said the mentality going into this season is to win every day, whether it be a game day or practice.

“I just want to win,” Sicke said. “Liberty League, NCAA, I just want to keep winning. We have a mentality of going 1–0 on the day, show up to practice ready to compete, no matter the day — just keep competing and keep stacking up wins at the end of the day.”

The South Hill Squad will add 12 new faces to the 2022 roster, including two Division I transfer students, junior defenseman Emmett Delesie and sophomore defenseman Jack Longo. Delesie, a midfield center, is transferring from Marshall University in Huntington, West Virginia, where he was a part of the 2020 Division I National Championship team. Longo, an outside back, is coming from Bryant University in Smithfield, Rhode Island. Eldridge said that Delesie will help strengthen the midfield position while Longo will bolster the defense.

After watching 16 seniors on the 2021 roster graduate, Lebitsch is looking forward to welcoming the freshmen and transfer students to fill their roster spots.

“We have a lot of new guys coming in, so it’s going to be very exciting,” Lebitsch said. “Having 16 seniors graduate last year, we will be extremely bottom-heavy this season, but I’m excited to see how the young guys will adapt to stepping into pivotal roles.”

The Liberty League will feature several challenging opponents, including the defending champions from St. Lawrence University as well as Rensselaer Polytechnic Institute in Troy, New York, Vassar College in Poughkeepsie, New York, Hobart College in Geneva, New York, and Rochester Institute of Technology. Eldridge believes that the tough conference schedule will help the Bombers prepare for a postseason push to return to the NCAA Division III tournament.

“We have built a schedule that is going to be extremely difficult right out of the gate,” Eldridge said. “This will help us prepare for conference play and will give us our best chance at making the NCAA tournament, very similar to recent years.”

Despite the tough schedule, Eldridge believes that 2022 will be similar to years past, ending with a deep postseason run.

“It all comes down to how well we prepare ourselves and execute each game day,” Eldridge said. Each game will be very challenging in the Liberty League, and how well we do and our results will be determined by our execution during those 16 games.”

“It’s the last ride, as everyone says,” Lebitsch said. “Last year we made it to the conference championship but fell just short. This year, you definitely appreciate it a little more as a senior, and I am looking forward to getting back and having one last chance at a championship with the guys I came up with.”

The Bombers will open the season Sept. 3 with a road trip to Salem, Virginia, to play an out-of–conference game against Texas Lutheran University.