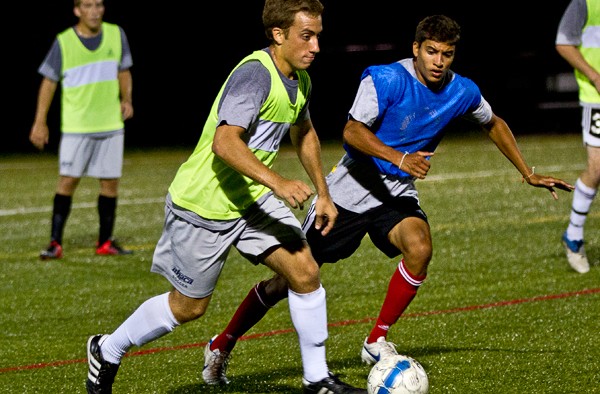 Last year, the men’s soccer roster was full of underclassmen, and despite finishing the 2011 season with a losing record, the Blue and Gold managed to sneak into the Empire 8 Conference Tournament. The team looks to return to the postseason after falling to Stevens Institute of Technology 2-1 last year in the playoffs. The Bombers finished fourth in the conference with a 3-3 record, earning them a spot in the Empire 8 playoffs for the first time since 2008.

Head Coach Andy Byrne said competing in the conference tournament last year not only helped the young squad gain experience, but also helped build confidence that will carry over to this season.

“It should give the guys some confidence that a young team like that was able to get into the tournament, and we’ll build from there,” Byrne said.

The competition will be fierce this fall with many star players returning across the Empire 8, including six all-conference first-team selections and reigning Empire 8 Player of the Year Zach Adler from Stevens. Last season, the Blue and Gold had five of their six regular season conference games decided by one goal.

“We know how important the Empire 8 games are, and Coach stresses that in our schedule,” Shirley said.  “He makes our non-conference schedule really hard for us, so by the time our E8 games come around we’re ready to go.”

The Empire 8 Preseason Coaches’ Poll projects the Bombers to finish fourth this season.  Nazareth, Elmira and Utica will all be strong contenders, but the biggest conference opponent will be Stevens, the five-time reigning champion of the Empire 8 tournament and the coaches’ favorite to win the conference. Though the South Hill squad lost to Stevens in last year’s semifinal, the Bombers were able to score a goal and keep it close. It was only the second goal Stevens had allowed all season in eight home matches.

Stevens lost in the Elite 8 round of the NCAA Division III tournament last year and is currently ranked 7th in the National Soccer Coaches Association of America preseason poll. The South Hill squad will play their last regular season match against the Ducks on Oct. 27. Senior midfielder Jack Shirley, Dan’s brother, believes the Bombers will be able to return to the postseason tournament for the second straight year if they focus on one game at a time.

“We know if we want to win the conference, we’re going to have to get by Stevens — and we know we’re playing them last this season — but we don’t want to get ahead of ourselves,” Jack said. “We have to start at the first conference game and pick up momentum from those games.”

The Blue and Gold have won the conference tournament twice — in 1999 and 2002 — and have been crowned regular season champions five times, most recently in 2008.  The last time the Bombers qualified for the NCAA Division III Tournament was also in 2008.

The South Hill squad is purely focused this season on winning the Empire 8 Conference. A core group of players possessing postseason experience and heightened confidence has given hope to the young team.

“This is our year,” Jack said. “We want it so bad, and we know we’re not thinking about any other team. This year is about us, and we’re not going to let it slip away from us.”